The Fox Is Guarding The Henhouse. 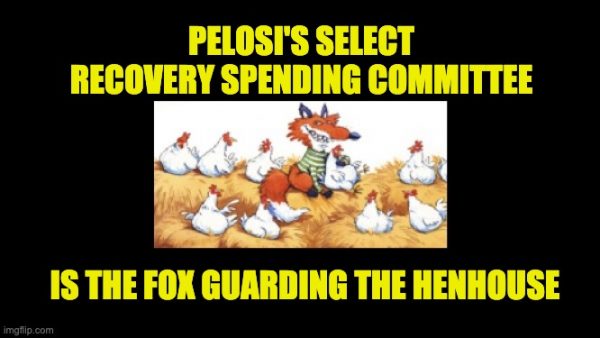 Talk about the Fox guarding the henhouse! Speaker Pelosi announced on Thursday that she is creating a new ‘bipartisan’ House select committee on the coronavirus crisis. It will exercise oversight of the federal response to coronavirus and will be chaired by Majority Whip Jim Clyburn. Jim Clyburn? That doesn’t sound bipartisan.

Pelosi told reporters the purpose of the committee is “to examine all aspects of the federal response to the coronavirus and ensure the taxpayer’s dollars are being wisely and efficiently spent. The panel will root out waste, fraud, and abuse; it will protect against price-gauging, profiteering, and political favoritism. The fact is, we do need transparency and accountability.”

Really? That’s strong words from the woman who tried to put an abortion slush fund into the first coronavirus package. And delayed the second rescue package because she wanted to include some of her pet projects, including parts of the green new deal, money for Planned Parenthood, getting rid of right to work laws, and much more. My personal favorite was the $25 million bailout to the Kennedy Center, which promptly started firing people.

And for the fourth rescue package, the Queen of mean told the New York Times that a new package could include a rollback of a tax change that affected people in states with high property taxes. You may remember that the tax cut bill included a provision limiting Americans from deducting more than $10,000 a year in state and local taxes from federal tax bills. The rollback would benefit wealthy people in states like NY, CA, Ill., and other Democratic Party stronghold states. Isn’t that political favoritism?

What of Rep. Clyburn do we really expect him to be bi-partisan and void of political favoritism? When the third phase recovery bill was being negotiated, he claimed the “coronavirus bill is a tremendous opportunity to restructure things to fit our vision.”  Now he is going to be in charge of overseeing its spending?

Remember the last time the Democrats controlled spending in a stimulus/recovery type package, the 2009 Porkulus bill?  Taxpayer money was used for projects like mapping radioactive rabbit feces, to study the sex lives of female college freshmen,  and teaching uncircumcised men in Africa to wash their genitals, among others.  And this same party will be overseeing the latest recovery bill

Pelosi said her new committee will have subpoena power and will be looking at the “here and now,” not the initial response to the CoronaVirusThey will be looking to go after Trump at a time when it’s more appropriate, Knowing Congressional Democrats that will probably happen when Schiff or Nadler is in the mood for a new impeachment hoax.

This committee, like most everything Pelosi does, is an unnecessary waste of taxpayer dollars, run by a party, and a chairman who wouldn’t recognize taxpayer’s dollars being wisely and efficiently spent if each dollar bill jumped up and kissed them on the lips. The select committee is nothing but a political ploy to turn around the momentum Trump has gained over the past few weeks. Once the committee starts meeting, look for Clyburn to do a daily press conference pushing the idea that “orange man bad.” as counter-programming to Trump’s daily conference.