She Should Look In The Mirror 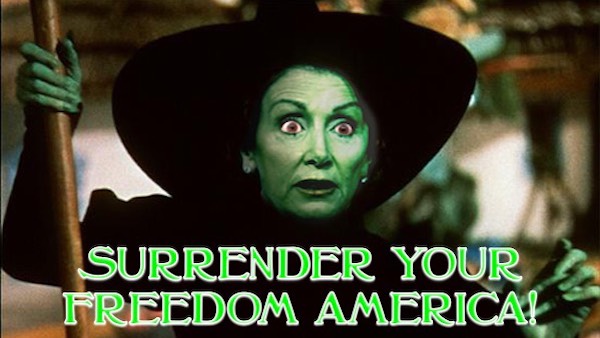 In a glowing interview with Variety magazine, Nancy Pelosi hammered President Trump as the most dangerous person this country has ever seen.

The Speaker of the House also presented herself as a “lioness,” determined to protect the children from this dangerous President.

“My whole message is about children,” the staunch abortion advocate claimed. “Anybody who hurts children — I’m a lioness. Watch out.”

Pelosi then engaged in her trademark hyperbole over the ‘dangers’ of President Trump.

“We have the most dangerous person in the history of our country sitting in the White House,” the California Democrat suggested, advising Democrats to turn out and vote to defeat him.

“We have the most dangerous person in the history of our country sitting in the White House,” Pelosi says. “People thought Hillary would win so they didn’t all turn out…if you don’t turn out, those who do turn out will call the shots.”

Odd how Pelosi, the ‘lioness’ protecting children, is the current leader of a Democrat party that supports abortion right up until the moment of birth.

Also odd, how she didn’t utter a word about children being separated from adults who were using them as a means to cross the border when Barack Obama was doing it.

It’s all for show, of course. Pelosi isn’t concerned about the children so much as she’s worried about the next election.

“People thought Hillary would win, so they didn’t all turn out,” she said of the 2016 election. “Nobody could possibly think that somebody like Donald Trump could be elected president of the United States.”

Actually, Nan, we were worried that Hillary would win. That’s why we came out and voted for Donald Trump! And you were so sad she lost you’ve spent the last three years obstructing and impeaching, which proves you don’t care about the children or any age of American. When the President called you incompetent, he was too kind.

Furthering the argument that everything she says and does is politically calculating, Pelosi admitted to Variety that her State of the Union stunt this year was, in fact, well thought out in advance.

Though previously claiming she tore up her copy of President Trump’s speech spontaneously, Variety reports that “the decision to rip up her copy was not impulsive.”

“He used the Congress as the backdrop for a reality television show when he had absolutely no reality in his speech,” Pelosi complained.

Speaking of losing touch with reality, the top Democrat has previously fretted that this “dangerous” man winning in 2020 would mean the end of “civilization as we know it.” And she is right in a way, it would be the end of civilization as she and the other anti-freedom progressives know it. If Trump is re-elected nobody would be above the law including illegal immigrants, more people will be working, Americans will be putting in their 40+ hours a week and keeping more of their pay for their family, and our leaders won’t apologize for the greatest country in the world the United States of America. And that’s just a few of the changes to the civilization as Nancy Pelosi knows it.

What will really sadden Pelosi is the knowledge that it was her push for impeachment that is going to help Trump get re-elected.