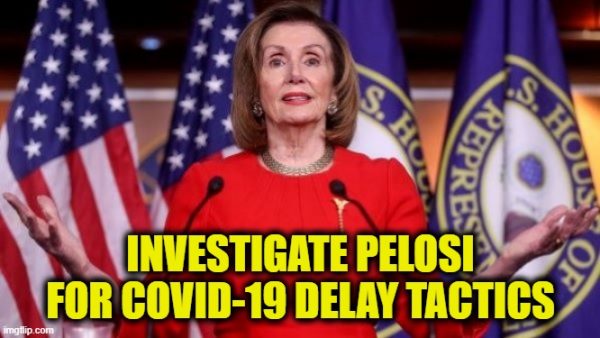 As the world navigates through this CoronaVirus pandemic Americans are trying to unify and demanding that our politicians act in a non-partisan manner. Nancy Pelosi didn’t get the message.  After delaying the recovery bill for a week trying to add all of her favorite liberal programs that had nothing to do with the virus, she went on TV Sunday, the queen of mean attempted to blame Trump for the Americans who have passed from the global pandemic. Interviewed by Jake Tapper on Sunday the Speaker of the House used sick and dying Americans as an evil sort of political capital, leveraging them in a vicious attack on President Trump. (see video /below) Pelosi Corona partisanship

“The president, his denial at the beginning, was deadly. His delaying of getting equipment to where it — his continued delay in getting equipment to where it’s needed is deadly. Now the best thing to do would be to prevent more loss of life rather than open things up because we just don’t know. We have to have testing, testing, testing,“ Pelosi said.

Later she added, “What did he know and when did he know it?” “That’s for an after-action review. But as the president fiddles, people are dying.” After action review? Oh boy, time for another democratic hoax investigation.

Gee, allow me to remember what President Trump was doing at the beginning of this crisis? China identified the virus on January 8. On January 31st Trump banned any foreign national who has traveled within China from coming into the country. Medical expert Dr. Anthony Fauci said Trump’s travel ban absolutely made a difference in saving lives. On the other hand, liberals were crapping all over the president’s decision:

What were the Democrats doing at the beginning of this crisis? They were trying to toss Trump out of office. While Trump was busy protecting Americans, the Democrats were running Trump’s impeachment trial. The Senate was siting as Jurors, and seven members of the house were acting as prosecution. Congress was not able to do anything until February 5th when the Senate rightfully voted to acquit the President.

Well, Pelosi was doing a bit more.  She was urging people to get out of the house and go to Chinatown

Pelosi, touring San Fran’s Chinatown Feb. 24: “We do want to say to people, come to Chinatown, here we are … come join us” pic.twitter.com/0FEOq9t4VM

During the early period of the CoronaVirus outbreak, President Trump was taking steps to protect Americans. The Democrats and liberals were trashing his actions and wasting time trying to oust Trump from office, overturn the 2016 election, and delay the passage of an aid package for partisan political reasons. If anyone is to be investigated, it should be Pelosi and her liberal sycophants.