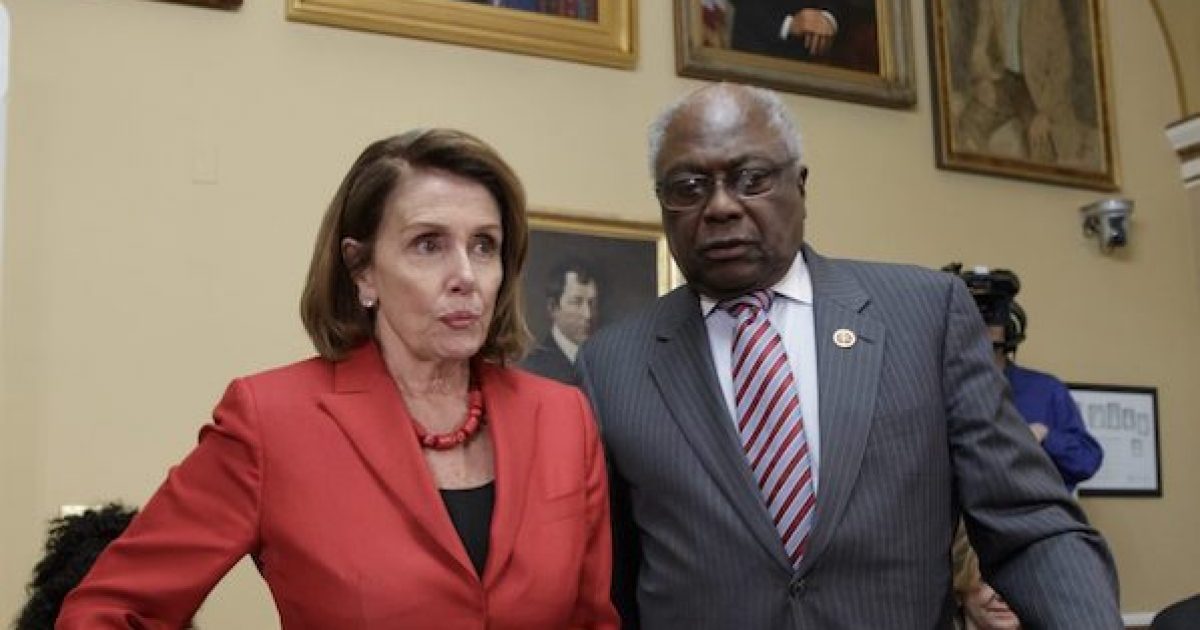 As the Democratic Party leadership was working with the Congressional Black Caucus to produce a resolution saying that being mean toward anyone is wrong, Nancy Pelosi worked to cover up the fact that her party lacks the backbone to say it opposes Antisemitism as stated by Rep Omar.  Majority Whip James Clyburn also worked to protect Omar, contending her experience was worse than what people suffered during the Holocaust, and the suffering of their children.

Pelosi’s tact was basically saying Rep. Omar is an idiot. According to Pelosi, Rep. Omar wasn’t wise enough to understand that as a member of Congress her words would have more weight.  Pelosi also suggested that Rep. Omar doesn’t have enough brain power to understand and remember that what she was saying would be offensive to Jews.  This was even though she has been criticized twice before for making anti-Semitic statements.

But when you cross that threshold in the Congress, your words weigh much more than when you’re shouting at somebody outside. And I feel confident that her words were not based on any anti-Semitic attitude. But that she didn’t have a full appreciation of how they landed on other people where these words have a history and a cultural impact that might have been unknown to her.

Rep. Ilhan Omar is an adult, and she is not an idiot. She knew exactly what she was saying. Twice in recent months, Rep. with the Jewish Community in Minneapolis who gave her “lessons” about Antisemitism.

The first time was when she was a candidate for the Democratic nomination:

“Last year, before she was elected to the House of Representatives, before she emerged from a crowded Democratic field in Minnesota’s liberal 5th Congressional District, leaders of Minneapolis’ Jewish community fashioned what could be described as an anti-Semitic intervention of Omar, a rising star of the left whose remarks had made many fellow Democrats in the Jewish community uncomfortable.”

The meeting was not held to criticize her policy stances but to explain to her that the words she uses to illustrate her positions can be hurtful. According to State Sen. Ron Latz, who hosted the meeting:

“Over the course of about two hours, we shared with her our concerns for things, including language that has references and meanings beyond just the meanings of words. Tropes, dog whistles — call them what you will. We explained to her how hurtful, and factually inaccurate, they were.”

Rep. Ilhan Omar got a two-hour lesson about anti-Semitic “dog whistles.” I can guarantee one of the whistles wash the dual loyalty canard.  She knew exactly what she was saying a week ago when she accused Israel’s supporters of dual loyalty.

After her recent “all about the Benjamins” statement, Omar met with the Jewish community again:

Over the past two weeks,Omar had several meetings in Minnesota with local Jewish leaders.

It was essentially part of a low-profile, not-on-Twitter, fence-mending tour following Omar’s remarks earlier in the month many saw as anti-Semitic and part of a pattern that dates back several years.

While Pelosi’s words reeked of a cover-up Majority Whip James Clyburn’s words were hurtful, as he compared her plight to that of Holocaust survivors:

Clyburn came to Omar’s defense Wednesday, lamenting that many of the media reports surrounding the recent controversy have omitted mentioning that Omar, who was born in Somalia, had to flee the country to escape violence and spent four years in a Kenyan refugee camp before coming to the United States.

Along with basically telling children of Hosurvivor survivors to shut up, Clyburn’s position seems to be that because she had a horrible experience, it’s okay Rep. Omar to spew some of the worst anti-Semitic stereotypes, even ones that were used by the Nazis to generate hatred of the Jews.

Even the ADL which very rarely criticizes a liberal bashed Clyburn’s statement:

Clyburn’s statement isn’t a surprise. In 2011 Clyburn appeared in an event with Jew-hater Louis Farrakhan. Rabbi Abraham Cooper,   of the Simon Wiesenthal Center in California, wrote in a Pittsburgh Post-Gazette op-ed.

Saying Americans should separate the positive message (black empowerment) from the bad (anti-Semitism) just doesn’t cut it anymore. Rev. Farrakhan does not deserve the respectability of having Rep. James Clyburn of South Carolina sit alongside him. We hope Mr. Clyburn follows the lead of Melanie Campbell and withdraws from the Pittsburgh event.

Clyburn told Farrakhan’s hate-magazine “Final Call” that he was “not bothered in the least bit” by those criticizing him for appearing at the event.

Rep. Omar has found support from another famous person, the former Grand Wizzer of the KKK.

Dr Duke & Eric Striker: By Defiance to Z.O.G. Ilhan Omar is NOW the most important Member of the US Congress! https://t.co/R4d4X81xdv pic.twitter.com/C083V57VQp