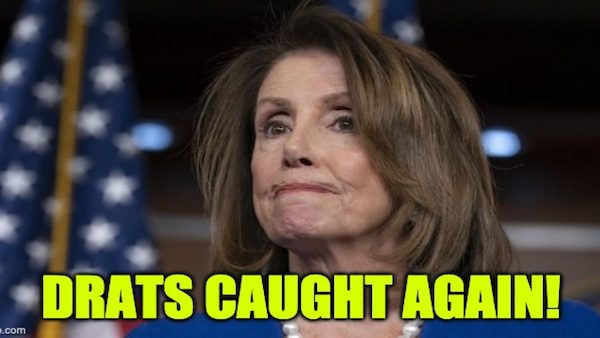 It’s the hair salon blow-out situation all over again. The rules are for all those other saps, but not for her. She’s far too special. One of the rule changes that Pelosi instituted in 2021 is installing metal detectors that elected officials must pass through on their way to the House floor.

This has been the source of real friction between the Democrats and Republicans since it has been instituted.

If we’re going to be really honest about it, it’s mainly there as a prop to help demonize Republicans and to create an obstacle for elected Republicans who have gone through the process of acquiring concealed carry permits.

Drama-addicted Democrats have made a big stink about being afraid for their lives and even go so far as accusing their own counterparts across the aisle of being co-conspirators in some kind of a plot to murder them. (As if most of them are even noteworthy enough to stand out from among the various staffers buzzing around the place, let alone be recognized for what party or politics they represent.)

Pelosi is hard at work laying down the law and literally making people pay for non-compliance with her rules. Her reasons were already being called into question.

At least two Republicans have been slapped with the fines so far, Rep. Andrew Clyde of Georgia and Rep. Louie Gohmert of Texas.

In a lengthy statement on the fine, Gohmert said he has complied with the “unconstitutional” metal detector policy “for weeks.” The lawmaker from Texas described the incident, asserting that he had already passed through the metal detectors earlier in the day.

“Yesterday, after complying with the metal detector screening, I was allowed to enter the House session where debate was occurring,” Gohmert said. “Knowing that I would soon be giving a speech, I stepped off the House floor to use the restroom right beside the Speaker’s lobby as I have done many times since the metal detectors have been installed.

“At no time until yesterday did anyone mention the need to be wanded after entering the restroom directly in front of the guards. The three main entrances have metal detectors, but the House floor entrance from the Speakers’ Lobby does not. Originally I had gone around the metal detectors a few times until it was mandated. I have been complying for weeks since. — FoxNews

When it was widely assumed that only Republicans would object to or be inconvenienced by this foolish policy, social media was chock full of this sort of partisan sniping.

Now, just days after the fines took effect, Pelosi got busted breaking her own rules.  Sounds strangely familiar: BLOW-OUT GATE: Pelosi Doubles-Down Says That She Was ‘Set Up’ By Salon Owner

Rules are for the little people, eh, Nancy?

Play by the rules Madam Speaker.

Multiple members saw you enter the Chamber without going through YOUR metal detectors.

So what did she do? In simple terms, the security equivalent of parking in the handicapped spot.

Rep. Rodney Davis, R-Ill., detailed to Fox News his firsthand account of watching the speaker enter the House floor from a forbidden entrance on Thursday.

“She opened the session on the floor, she came through what is known as the Speaker’s lobby,” Davis said. “We are all told, one Republican was fined for doing this just yesterday, that you cannot walk through those entrances unless you are disabled.” –FoxNews

It’s not a question of whether this is a good rule or a bad rule. It’s a question if it’s a rule that Democrats are equally responsible for obeying or if it’s just a political cudgel that Democrats use to thrash Republicans?

Gohmert is planning to fight the Constitutionality of these fines in court. That’s not the point.

If Pelosi can insist that others obey this heavy-handed and intrusive rule against members of Congress who have been elected and sworn in to uphold the Constitution, she can damned well lead by example and obey it herself.