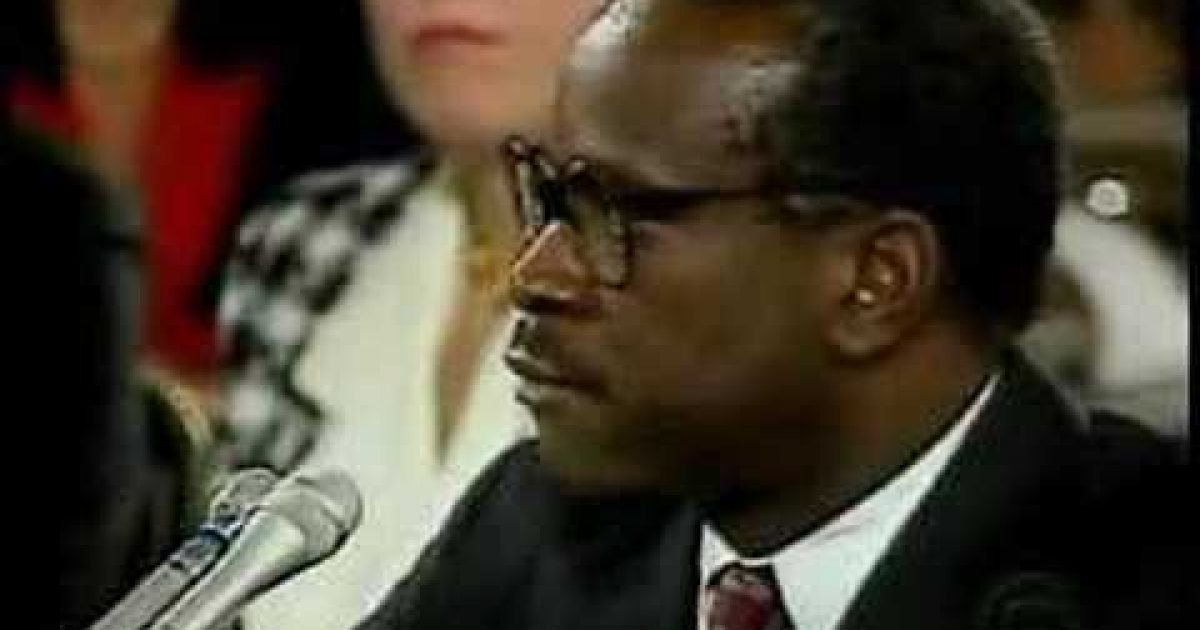 It didn’t take long for the inner Klansman of Nancy Pelosi and Chuck Schumer to come to the forefront of their racist vitriol once Dr. Ben Carson agreed to be the next Secretary of Housing and Urban Development.  You see, according to Fräulein Pelosi and Herr Schumer, blacks can do anything they want…as long as they stay on the Democrat’s plantation and do as they are told by the more enlightened progressives such as they.

Progressives like Pelosi and Schumer are simply petrified, much like the slave-owning Democrats of antebellum, that blacks will turn on them once they realize they don’t have to be in chains anymore.  We saw this with Supreme Court Justice Clarence Thomas during his Senate Confirmation when Liberals tried to keep him “in his place.”

Clarence Thomas summed it up perfectly in his mic drop response to the baseless allegations that progressives tried to sabotage him with:

It’s what they tried to do to Justice Thomas and it is what Pelosi and Schumer are trying to do to Dr. Carson.  Just looking at some of their comments about how Carson is just some ignorant black guy who couldn’t possibly have the cognitive capacity to fill the position is just insulting to all people of color.

From Pelosi’s own racist mouth:

“Dr. Ben Carson is a disconcerting and disturbingly unqualified choice to lead a department as complex and consequential as Housing and Urban Development.”

Apparently one of the most brilliant neurosurgeons of our age can’t pick up the intricacies of bureaucracy.  Riiiiiight.  What is really disturbing to Pelosi is not Dr. Carson’s mind but rather the color of his skin.

“Our country deserves a HUD Secretary with the relevant experience to protect the rights of homeowners and renters, particularly in low-income and minority communities, and to ensure that everyone in our country can have access to safe and affordable housing without facing discrimination or homelessness.”

“There is no evidence that Dr. Carson brings the necessary credentials to hold a position with such immense responsibilities and impact on families and communities across America.”

First, let me highlight that her statements are full of coded language that a racist use in order to be racist in public.  All that experience she is talking about is what is known as “the white man’s burden” made famous by Rudyard Kipling’s poem of the same name.  That white educated people must be in charge because the blacks cannot think or act in their own best interest.  It’s been the progressives modus operandi for decades now, trying to keep blacks in their place in order to ensure that they continue to vote for Democrats en masse.  Because Dems know once enough blacks leave the Democrat plantation and show others that life is better pulling yourself up by your own bootstraps and being successful on your own merit that their party will disintegrate.

Credentials?  On discrimination or homelessness?

How about Dr. Carson has nothing BUT experience dealing with this.  Carson was grew up in the 1950’s to a single mother who had to work 3 jobs, usually as a domestic servant just to make sure her son had enough food on the table.  Growing up poor and black in the 50’s.  Overcoming racism and poverty from a single parent home to become a world-renowned neurosurgeon seems like a good model in which people could emulate.

Senator Chuck Schumer echoes Pelosi’s claims that blacks need to know their place and stay dependent on the government in his racist attack against Ben Carson saying this:

“I have serious concerns about Dr. Carson’s lack of expertise and experience in dealing with housing issues. Someone who is as anti-government as him is a strange fit for Housing Secretary, to say the least. As he moves through the confirmation process, Americans deserve to know that their potential HUD Secretary is well versed in housing policy and has a vision for federal housing programs that meets the needs of Americans across the country and seeks to provide access to those that we haven’t reached already.”

Let’s take a look at that emboldened part.  Schumer is saying that since Carson is off the Democrat’s plantation he shouldn’t be in charge of so many other people who make up the Democrat’s voting base.  Namely poor blacks who have been bamboozled into thinking that government is always the answer and that they are incapable of succeeding without the governments interference.

It’s the Great Lie that progressives have been peddling for more than 50 years and racists like Pelosi and Schumer are petrified that after half a century, black people are finally waking up to the fact that they don’t NEED Democrats to be successful.  In fact, blacks are realizing that Democrats are the ones holding them back.

Every time a Clarence Thomas, a Ben Carson, an Allen West or a David Clarke stand up and show they are nobody’s slave the progressive wing of the Democrat party try to, using Justice Thomas’ own words:  lynch them.

Because that’s what slave owners  do to slaves who run away from their plantation…they lynch ’em.  And that’s what slave masters Pelosi and Schumer are trying to do now.  Calling a world-renowned neurosurgeon who grew up in poverty; ignorant and inexperienced to the needs of the poor.  In truth, I doubt there are many people who could relate to the struggles and how to overcome them better than Dr. Carson.

The only thing it’s missing is Pelosi and Schumer in white hoods setting the cross on fire.  The mainstream media will continue to push this narrative of “the ignorant unqualified black trying up up-jump himself to a position he isn’t qualified for” while Pelosi cackles and Schumer cracks the whip.

Black Conservatives are number one on the hit list of the progressive left.  Once black people realize that they don’t have to be beholden to the government they will start realizing that they can be successful once they flee the Democrat Plantation.

That’s why the racist wing of the Democrat Party, headed by Nancy Pelosi and Chuck Schumer try so blatantly to destroy any black man or women who steps out on their own and doesn’t toe the progressive line.

That’s why we have to fight against racism.  Support people like Dr. Ben Carson who have the courage to stand up to the racists like Pelosi and Schumer like he has been since 1951.  To fight to make a name for himself, to make a career and to make life that was better than what came before.

That is what he, as a black man, brings to the Department of Housing and Urban Development…and that is what has the left so petrified.