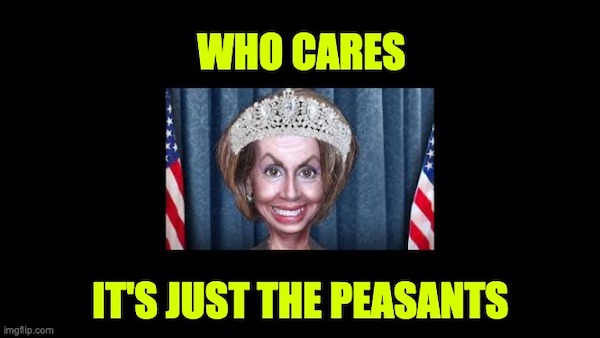 Treasury Secretary Steven Mnuchin stated on Monday morning something many of suspect. He’s afraid another much-needed coronavirus relief bill will not be passed because House Speaker Nancy Pelosi is scared that doing so would provide some positive vibes toward President Trump. Pelosi afraid COVID bill

As usual, since he took office, everything about beating Trump, even if it is at the expense of the American people. These folks are plain outright dastardly. Nothing matters but the completion of their mission, and that mission is the removal of the president so they can get back to work, transforming our nation into a socialist nightmare.

“I am somewhat concerned that she is afraid that any deal would be good for the president,” he told CNBC.

Pelosi, a Democrat from California, in July began calling the coronavirus the “Trump virus” and has for months blamed the president for the economic downturn that followed nationwide lockdowns.

“The president of the United States is central to that failure because he rejects science and he rejects governance,” Pelosi said on MSNBC in early September. “From the start, he was in denial, delay, distortion, called it a hoax. He just would not accept the science.”

Pelosi and her senate partner who has no idea how to wear eyeglasses, has beens taking every opportunity possible to slam the president as Americans seem to be displeased with how Trump has handled the coronavirus pandemic.

A recent poll from Harvard-Harris Says that almost 2,000 registered voters revealed that 59 percent of them were not happy with the president’s handling of the situation. This means voters believe the propaganda from the liberals in Congress and the mainstream media—definitely not good news.

Mnuchin went on to say that Trump is more than willing to sign some executive orders to get relief passed if an agreement is not reached soon. “The president is going to make sure that he uses his authority to do whatever he can to help small businesses, but there are limitations,” the treasury secretary said.

Folks, the bottom line here is that Pelosi is politicizing the suffering of normal Americans who have had their livelihood wrecked by the shutdowns that resulted from attempts to control the spread of the coronavirus. That should be enough to convince anyone that modern day leftists do not care about people, but about power.