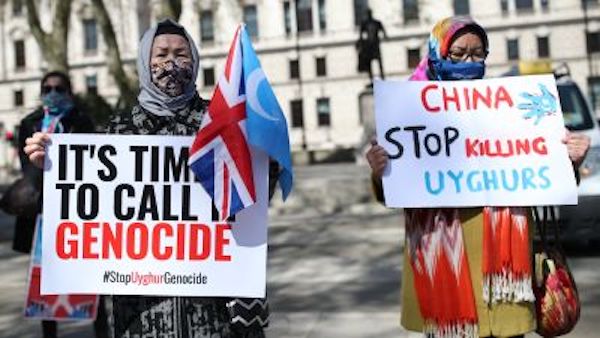 With only minutes remaining on Michelle Bachelet’s 4-year term as UN High Commissioner for Human Rights, she dropped a long-awaited report on China’s human rights record.

It’s not like this was a secret. Even China’s internal documents painted a damning picture of China’s treatment of their religious and ethnic minorities.

In its report, the Office of the UN High Commissioner for Human Rights (OHCHR) said it found “serious human rights violations” in the Chinese government’s “counter-terrorism” strategies targeting Uyghurs and other Muslims in Xinjiang.

The investigation found China’s “anti-terrorism” laws to be “deeply problematic” on the human rights front as they offered broad power to government officials with very little independent oversight.\The report also raises concerns about “torture or ill-treatment” at detention camps—which China refers to as “Vocational Education and Training Centres”—but the OHCHR said it was not able to draw a firm conclusion about these abuses due to limited access to these facilities.

The report urges the Chinese government to investigate the alleged human rights violations at the detention camps and conduct a full review of the scope of its anti-terror laws.

The report also urges businesses to meet their human rights responsibility, a controversial issue as companies who have addressed the issues in Xinjiang have faced state media-driven boycotts in China. — Forbes

There have been mixed reactions to the report.

Predictably, China was incensed that anyone would call them out for their Human Rights record.

China has always denied targeting Uyghurs and others for their religion and culture, denouncing the accusations as a confection of lies by the West and saying its crackdown was aimed at quashing separatism, terrorism and religious extremism. It has said camp attendance was voluntary and no human rights were abused, although internal Chinese documents have frequently contradicted such claims.

…In a note accompanying the U.N. report, China’s diplomatic mission in Geneva registered its strong opposition to the findings, which it said ignore human rights achievements in Xinjiang and the damage caused by terrorism and extremism to the population.
“Based on the disinformation and lies fabricated by anti-China forces and out of presumption of guilt, the so-called ‘assessment’ distorts China’s laws, wantonly smears and slanders China, and interferes in China’s internal affairs,” the note said in part. — ABC

Alibaba Group Holding Ltd, the Chinese company that runs the major online marketplace of the same name, admitted on Thursday that it had developed software that identifies individuals as members of China’s ethnic Uyghur minority solely using images of their faces.

The revelation occurred a week after reports surfaced that Huawei, another multinational Chinese company with close ties to the Communist Party, had also developed facial recognition technology to help police and Party authorities identify Uyghurs by sight, dubbed a “Uyghur alert” system. — Breitbart

The EU Made A Statement

The European Commission, responding to a U.N. report that China may have committed crimes against humanity in its Xinjiang region, said on Thursday that it strongly condemns human rights violations in the country.

“We are currently assessing the content of the report and we will be issuing reaction in good time,” a European Commission spokesperson told a news briefing.

“But, as we have said before, the EU strongly condemns human rights violations in Xinjiang and other parts of China – in particular the persecution of the Uyghurs and other persons belonging to national or religious and ethnic minorities.” — Reuters

Advocates of Oppressed Chinese Citizens Are NOT Happy

Michelle Bachelet, once a political detainee under Chilean dictator Augusto Pinochet and a doctor for tortured children, pledged to be the champion of victims when she became U.N. High Commissioner for Human Rights in 2018.

But as her tenure ends this week, family members and advocates for those caught up in China’s repression of dissent have said they feel let down despite the last-minute release of a report critical of China, and they are calling for a more outspoken successor. — Reuters

What About US Corporations?

A lot of big corporations who love to wag their woke fingers at America have some serious questions to answer.

We’re talking about big names like Disney, the NBA, Hollywood, not to mention companies like Nike who have been accused of having some of their products made by forced labor in China.

Exhibit A: REPORT: China Is Using Uighur Labor To Produce Face Masks And PPE For Export Worldwide (The 83 brands identified in the Australian study as using Uighur forced labor include Nike and Apple)

Big Tech is not in the clear either. They have been actively helping the Chinese Communist Party suppress both content and platforms sharing news critical of China’s ruling regime — including reports like this one.

Worse than that, Silicon Valley has provided much of the tech that allows China to operate the surveillance state and Social Credit system.

Will we be getting a mea culpa from all of our woke corporations? Will they distance themselves from China now that they can’t pretend they don’t know about these labor camps? Of course not. They’ll carry on like nothing has changed — because nothing has.