Pat Buchanan Is Using The Iran Deal To Promote Antisemitism 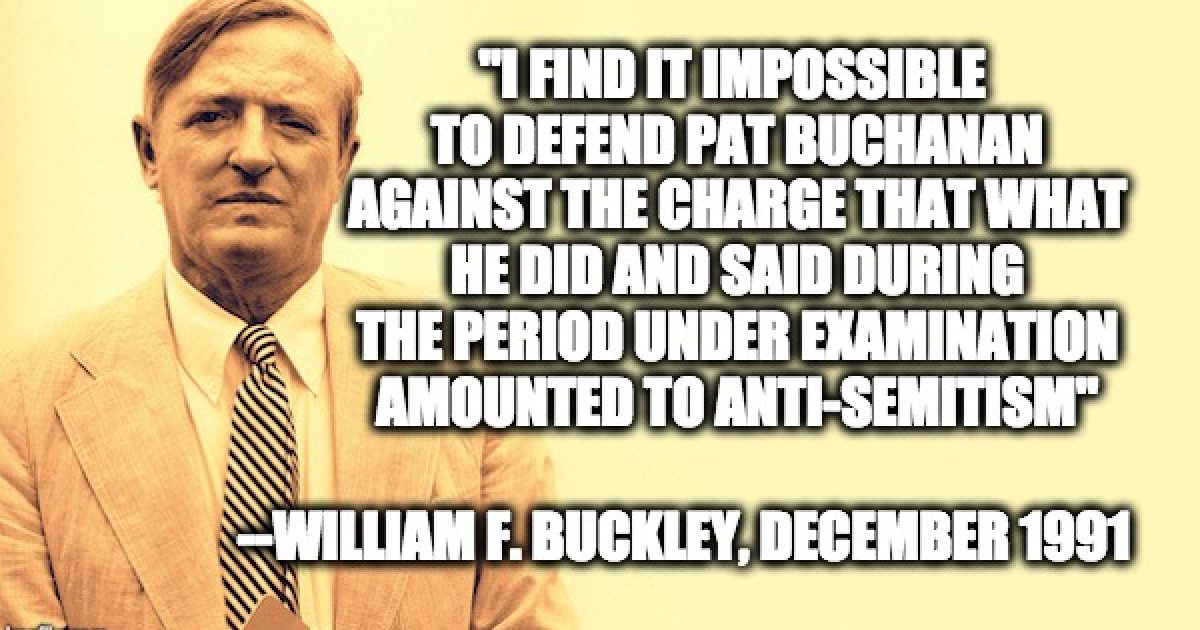 My buddy Onan Coca began a post at Eagle Rising by saying, I hate rashly throwing around words like racist or anti-Semite, but in Pat Buchanan’s case, I really am beginning to wonder if he hate’s Israel and the Jews. Well Onan if they ever give out membership cards, Pat Buchanan would be a card-carrying anti-Semite.

In his conversation with Hannity, Buchanan argued that Netanyahu was simply trying to force the United States to go to war with Iran so that Israel wouldn’t have to. Buchanan implied that Netanyahu had been lying, that the information he shared with the world on Monday wasn’t true, and that he was trying to trick Trump into starting another war.

This is nothing new for Buchanan. After Bush #43 invaded Iraq, he wrote an article called “Whose War” that blamed the Bush action bunch of mostly Jewish public figures such as Bill Kristol, Paul Wolfowitz, Max Boot, and Richard Perle. According to the anti-Semitic Buchanan charges those Jews were “colluding with Israel to ignite wars and destroy the Oslo Accords. We charge them with deliberately damaging U.S. relations with every state in the Arab world that defies Israel or supports the Palestinian people’s right to a homeland of their own.”

He goes on to say, “For whose benefit these endless wars in a region that holds nothing vital to America save oil, which the Arabs must sell us to survive? Who would benefit from a war of civilizations between the West and Islam? Answer: one nation, one leader, one party. Israel, Sharon, Likud.”

Truth be told, Bush 45 did consult with then-PM Ariel Sharon before the 2003 invasion of Iraq, but unlike Buchanan’s fantasy Sharon warned Bush NOT to invade Iraq  arguing correctly that if Saddam was removed, “Iran, a far more dangerous player, will be rid of its principal enemy and free to pursue its ambitions of regional hegemony.”  Which is exactly what happened.

In 1990 when Bush 41 was considering using the American military to drive Iraq out of Kuwait, Buchanan said on the “The McLaughlin Group,”

”There are only two groups that are beating the drums for war in the Middle East: the Israeli defense ministry and its amen corner [Jews] in the United States.”

Here again, Buchanan’s apparent prejudices about Jews seemed to blind him to the facts. On the key January 1991 Capitol Hill vote authorizing the war in the Gulf, most Jewish members of Congress voted no — on Buchanan’s side, not Kissinger’s.

In his Eagle Rising piece, Onan argues, ” my only conclusion can be that he’s an anti-Semite because what other reason could he have for being willing to let a regime whose desire is the destruction of Israel, get a hold of a bomb that is 5X stronger than the one we dropped on Hiroshima?”
Allow me to provide the evidence that beyond the Iran deal and the invasions of Iraq Pat Buchanan is indeed an anti-Semite.

In a 1991 essay, William F. Buckley gave former National Review contributor and presidential candidate Pat Buchanan the label he deserved, anti-Semite. The article called in  Search of Anti-Semitism” and ran  December 31, 1991, Buckley, concluded, that Buchanan was indeed an anti-Semite:

I find it impossible to defend Pat Buchanan against the charge that what he did and said during the period under examination amounted to anti-Semitism, whatever it was that drove him to say and do it: most probably, an iconoclastic temperament.

When Elena Kagan was nominated for the Supreme Court most conservatives (including me) opposed her nomination because based on her history it was clear that she would be an activist justice who would change the meaning of the constitution to fit the progressive agenda.  But Pat Buchanan had a different reason, there were too many Jews on the Supreme Court.

….Not since Thurgood Marshall, 43 years ago, has a Democratic president chosen an African-American. The lone sitting black justice is Clarence Thomas, nominated by George H. W. Bush. And Thomas was made to run a gauntlet by Senate liberals.

In 2007, Buchanan made a similar statement about the U.S. Senate

“If you want to know ethnicity and power in the United States Senate, 13 members of the Senate are Jewish folks who are from 2 percent of the population. That is where real power is at..” (“The McLaughlin Group,” Feb. 2, 2007).”

Buchanan is also a holocaust denier, he  challenged the historical record that thousands of Jews were gassed to death by diesel exhaust at Treblinka:

“Diesel engines do not emit enough carbon monoxide to kill anybody.” -New Republic, 10/22/90

Carbon monoxide emitted by diesel engines is enough to asphyxiate people when they are crammed by the hundreds into thirteen-foot chambers. And from July 1942 through November 1943, the Germans killed between 870,000 and 925,000 Jews at Treblinka

Perhaps Buchanan wasn’t trying to deny the Holocaust, perhaps he was just trying to defend someone he admired and that the U.S. was wrong to fight

“He (Hitler) was also an individual of great courage, a soldier’s soldier in the Great War, a leader steeped in the history of Europe, who possessed oratorical powers that could awe even those who despised him. But Hitler’s success was not based on his extraordinary gifts alone. His genius was an intuitive sense of the mushiness, the character flaws, the weakness masquerading as morality that was in the hearts of the statesmen who stood in his path.” – St. Louis Globe-Democrat, Aug 25, 1977″

In the book, ”A Republic, Not an Empire”  Mr. Buchanan analyzes the history of American foreign policy and questions whether Hitler sought war with the West or was driven to it. ”Hitler made no overt move to threaten U.S vital interests,” after his initial victories across Europe in 1939 and 1940, Mr. Buchanan wrote.

Most historians believe it was LOGISTICALLY IMPOSSIBLE TO GAS 6 MILLION JEWS AND REDUCE THEIR BODIES TO ASHES.”

“I would like to see some rebuttal from Holocaust believers. Let’s see some pictures of those gas chambers or those big cremation ovens. I’ll tell you right now – THEY DON’T EXIST. The same blinded people that believe that the Germans intentionally killed Jews – also believe the myth of the Anne Frank Diary.”

“As anyone reads the various articles that have been posted here, they will have to realize that there simply were not gas chambers or mass crematoriums at any of the German internment camps.”

“Kosher and Halal ritual slaughter, belong in the middle east sands, where both barbaric practices were begun, after an instruction to the Hebrews and Islamics by their god voices, probably the same one. It’s a pity they cannot cut each others throats.”

Many people wonder why American Jews tend to be on the liberal side of politics. One of the reasons is that until the early 1960’s  Jew-hatred that was a big part of the conservative movement. Conservative favorites and American heroes such as aviator Charles Lindbergh and Henry Ford were staunchly anti-Semitic, as were the post-war conservative anti-communist groups such as the John Birch Society and The Liberty Lobby. Many of the most famous conservative writers such as  Joseph Sobran, and Buchanan pushed anti-Semitic lies.

It was William F. Buckley who changed things. He led the effort to show America that conservative policies will save the country (helping to elect Ronald Reagan). But he also attacked the anti-Semites in the conservative movement and marginalized them. And because Buckley was an intellectual the inference was that not only was Jew-hatred bad…but it was stupid.

Through his efforts and attacks on the conservative haters in this country like Pat Buchanan, Buckley pushed Antisemitism to the fringes of American politics where it lived for years until it joined the Democratic Party of Barack Obama, Al Sharpton, Keith Ellison and groups like Ploughshares, Center For American Progress, and Media Matters. Their actions will drive young Jews toward conservatism the same way people like Pat Buchanan drove young Jews toward liberalism in prior generations.