A Passover Message Of Hope From Benzion Netanyahu (Bibi’s Father) 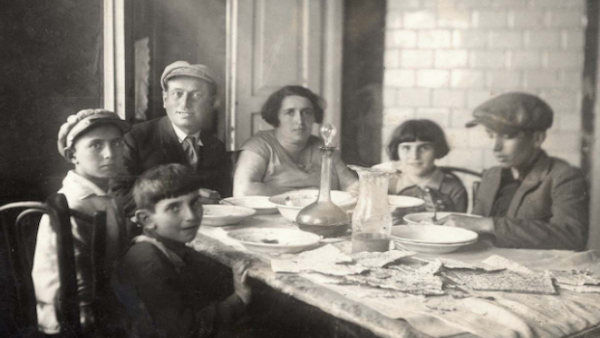 During the 1940s, Benzion Netanyahu—the father of Israel’s current prime minister—served as executive director of the American wing of the Revisionist Zionists, the movement founded by the Zionist leader Ze’ ev Jabotinsky.   Netanyahu was also editor of its biweekly publication, Zionews.

At the same time, Netanyahu was completing his Ph.D. at Dropsie College in Philadelphia, writing a dissertation on the origins of the Spanish Inquisition. His unique perspective as a historian is reflected in the editorial below, which appeared in Zionews in April 1941, just before the Passover holiday.

Viewing his era’s troubles through the prism of Jewish history, he expresses his conviction that the Jewish people ultimately will triumph over their adversaries, including “Hitler and Mussolini [who] have started a march of extermination against us.”

Netanyahu’s use of the term “extermination” is noteworthy, given the fact that the editorial was published two months before the Germans invaded the Soviet Union and began the systematic mass slaughter of European Jewry. It was not possible, in the spring of 1941, to foresee the extent of what would later be called the Holocaust.

The word “extermination” was used by Netanyahu and others at the time to refer to the economic ruin, expulsions, and starvation that Jewish communities in Europe already were beginning to experience.

The news reports reaching the United States from Europe during the two weeks before Netanyahu wrote his editorial offered ample evidence of the devastation suffered by Jews across the continent.

Fifty thousand Jews in Salonika had fallen into the hands of the German forces invading Greece. Twelve thousand Jews fled from Zagreb to escape the approaching Nazi forces in Yugoslavia, leaving behind almost all their possessions. Ghettoes had been set up for the Jews in the German-occupied Polish cities of Lublin, Krakow, Radom, and Kielce. Food rations for the Jews in the Warsaw Ghetto, which were already just half of those allotted to non-Jewish Poles, were slashed to only 700 calories per day.

In Holland, the Germans established a new government office for the ominous purpose of “investigating racial Jewish problems.” In France, the Nazis’ Vichy allies were expanding the denaturalization of foreign-born Jews in preparation for their deportation. Rumania’s Labor Ministry announced the firing of a wide range of Jewish government employees. Slovak officials reportedly were creating slave labor camps for that country’s Jews. Hungary’s new premier was planning new anti-Jewish legislation.

In the face of these mounting horrors, Netanyahu took the long view and composed this brief but stirring message of hope. Perhaps its echoes are relevant even for a generation that faces a very different type of adversary.

“For ages and generations we have assembled in our homes on the first and second evenings of Passover to commemorate the liberation of our forefathers from the slavery of Egypt. Thousands of years have passed since; new slavery, hatreds and persecutions followed our race into every corner of the world. We were uprooted from free and independent Judea to be slaves in the shadow of the Arc of Titus in Rome. We were burned on the fires of the Spanish Inquisition. The cossacks of Bogdan Chmelnitzky have beaten and killed us on the Ukraine. The Prussian antisemites have made fun of us in the German ghettos. The Russian pogromists have shed our blood like water. The Arab effendis have proclaimed a holy war on us. Hitler and Mussolini have started a march of extermination against us.

“Still, through oceans of blood, our blood, through oceans of tears, our tears, hated, persecuted, beaten, wandering and homeless, we assemble at the Passover Seder to thank God for our liberation from Egypt, and to express once again the hope of the Hagada: ‘Hashata avdei, leshana habaah bnei-chorin.’ ‘This year we are still slaves–next year we shall be free men.’

“It is a great hope. It is a great spirit of a great nation.  Only a nation of our spiritual calibre could come through the ages of unparalleled sufferings with its spirit unbroken; still alive; still striving for liberty. Next year we shall be free men.”