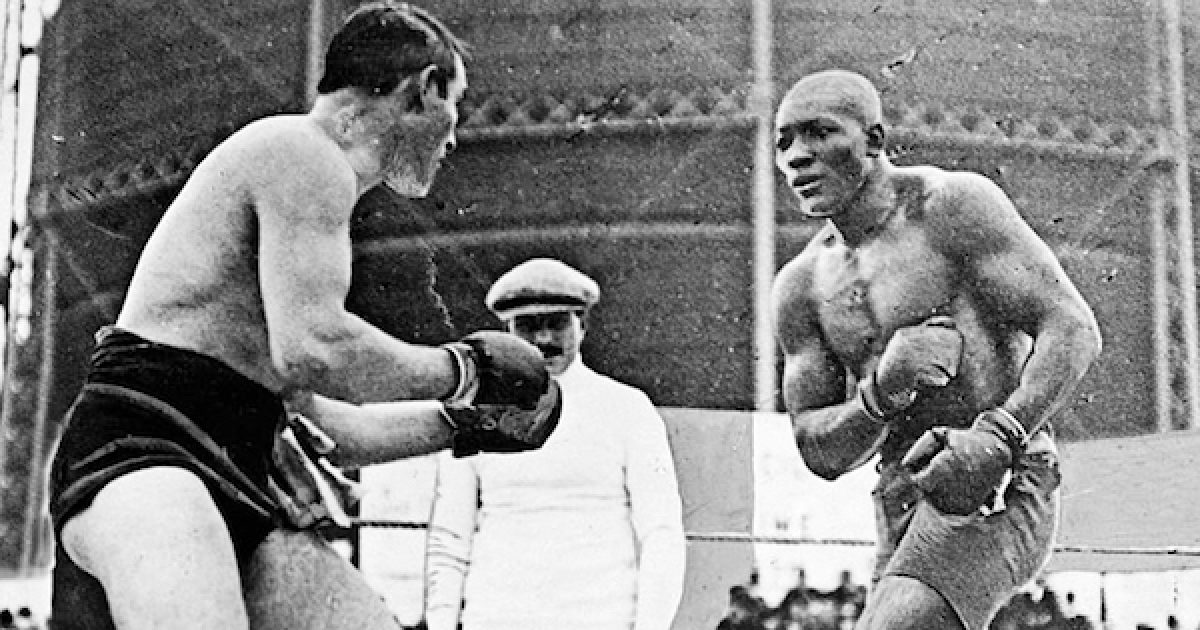 President Donald Trump is apparently preparing to issue a posthumous pardon for Jack Johnson, America’s first black heavyweight champion. In 1912, Johnson was sentenced to ten months in prison on a charge that in many people’s opinion was only filed because he was black.

The pardon only makes sense, but, strangely, even our first black president, Barack Obama, refused to right this century-old wrong.

In another Trumpian wrinkle, it also appears that the pardon is in the offing because of Hollywood actor Sylvester Stallone. President Trump took to his overheated Twitter account on Saturday to reveal his interest in pardoning the famed boxer after the action star put a bug in Trump’s ear over the idea.

“Sylvester Stallone called me with the story of heavyweight boxing champion Jack Johnson,” Trump wrote on April 21. “His trials and tribulations were great, his life complex and controversial. Others have looked at this over the years, most thought it would be done, but yes, I am considering a Full Pardon!”

Sylvester Stallone called me with the story of heavyweight boxing champion Jack Johnson. His trials and tribulations were great, his life complex and controversial. Others have looked at this over the years, most thought it would be done, but yes, I am considering a Full Pardon!

Jack Johnson did, indeed, face “trials and tribulations,” but it was mostly due to the racist “law” he was subjected to. He went from being celebrated across the land as a champion athlete to being pursued and treated like a subhuman due to a Jim Crow-inspired federal law called the Mann Act.

The Mann Act was ostensibly about ending “white slavery” and was supposed to put a crimp in women — especially European immigrants — from being lured into prostitution. But it was often a racially motivated charge and was used to slap down certain members of society that the establishment didn’t like. (In fact, the law was used against such “subversives” as Charlie Chaplin and even rock-n-roller Chuck Berry.)

If anyone deserves a pardon, it is this man. Sadly, he passed away decades ago, but at least a pardon would officially clear his name and right a wrong.

So, who was this man, Jack Johnson?

Well, in 1908, Jack “Galveston Giant” Johnson became the first black heavyweight champion in the U.S.A. During his long career, Johnson fought 114 fights taking 80 wins, 45 by knockouts. Not only was he the heavyweight champion of the world for mainstream boxing, but he also repeatedly won the World Colored Heavyweight title and reigned as champion in the black boxing scene for nearly a decade before so controversially entering the ring against white fighters.

But, much to the distaste of white sportswriters, Johnson fought in a style denigrated by many in the fight game.

Because he was black, many critics called his fighting style “cowardly” because he would bide his time during a match, fighting to tire his opponent out, while steadily upping his game as the match progressed. How do I know Johnson was treated in a racist manner on this count? Because years before famed boxer “Gentleman” Jim Corbett had already used those tactics to win his titles and he was called a genius.

Remember that Johnson fought during the height of the power of Jim Crow and during a day when the Ku Klux Klan was so powerful that it controlled politics in states all across the nation (and not just in the south. Indiana was one more thoroughly infiltrated by the Klan than any state in the nation).

I remind of this fact because when he won the heavyweight title in 1910 by beating former undisputed champ James J. Jeffries (a white man, of course), many whites were so upset that they briefly rioted in the streets. Unrest over the decision was seen in states like Texas, Colorado, New York, and even Washington D.C.

On the other hand, black Americans were thrilled with the outcome. Johnson became a folk hero to blacks nationwide and that fact just made Klan-types even more upset. As blacks sang songs about the boxer and treated him like a king everywhere he went, some whites seethed with anger.

As a result of these conflicted feelings about him, even as he became the best fighter in the nation, the racists were looking for ways to tear him down and the opportunity presented itself by Jack’s own actions.

Firstly, Johnson was accused of knocking around his wife, Etta Terry Duryea, a white Brooklyn socialite. Sadly, Duryea was not a stable person and soon committed suicide by pistol in 1912.

Only three months later, Johnson married wife number two, Lucille Cameron, another white woman. As it happened, the fighter married three times and each woman was white. This was another fact that enraged racists.

Anyway, after riling white detractors by beating Dyryea and — as they saw it — driving her to suicide, Johnson was arrested for a violation of the Mann Act for transporting his wife Cameron across state lines for “for immoral purposes.” Prosecutors maintained that Cameron was a prostitute. That case fell apart, but Johnson was arrested on the same charges only a month later when caught with a woman named Belle Schreiber. They were bound and determined to get Johnson, for sure.

Johnson was soon tried and convicted in the Schreiber case and sentenced to prison. But before he was incarcerated, the boxer skipped bail and fled to Canada to avoid his sentence. He stayed in Canada until 1920. He finally made a deal with U.S. authorities to come back to the U.S. and serve his time.

Even in jail Johnson proved to be a man of many talents. While serving his time he invented a type of wrench that had adjustable jaws and on April 18, 1922, he received US Patent number 1,413,121 for the device.

Still, despite his riches, the famed boxer spent the rest of his life as a convicted felon. He died a felon in 1946 in a car accident in North Carolina.

Some of his earned plaudits didn’t come until after his death. For instance, Johnson was inducted into the Boxing Hall of Fame in 1954. And he has been hailed as an American hero by many in modern times. Many efforts have been made to get one president or another to pardon him for his “crime” of driving across state lines with a white woman. One effort was launched in 2008 but our then president, George W. Bush, refused to rise to the occasion and deliver a pardon as he left office.

Unbelievably, even Barack Obama refused to pardon the nation’s first black boxing champion. In 2009 Senator John McCain (R, AZ) pushed a resolution to encourage Obama to pardon the boxer, but the first black president ignored the pleas of Johnson’s supporters. Obama was given another chance to pardon Johnson in 2016, but again ignored the request.

“Despite this resolution passing both chambers of Congress several times in recent years, no pardon has been issued to date,” Booker and McCain said in a statement. “I hope President Trump will seize the opportunity before him to right this historical wrong and restore a great athlete’s legacy.”

Now it is up to President Donald Trump. I would guess that this is an easy sell for a man such as Trump. Who can’t see that this is just the sort of thing Trump loves doing?  In the end, he will likely jump on this opportunity to be the man who pardoned Jack Johnson and righted a century-old wrong. And watch the left howl when he does it.