Palestinians Ramp Up the Hate 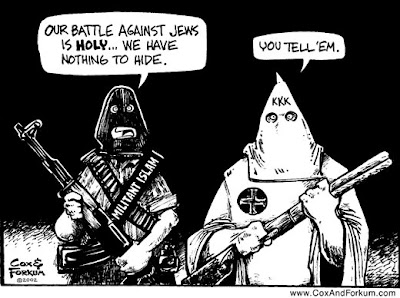 Over the past few days the media stations run by the “moderate” Palestinian President Mahmoud Abbas have been spewing more hate than usual. From music videos selling the benefits of martyrdom to songs about kidnapping Jews, Palestinian media has approached the disgusting levels of anti-Israel AND anti-Jewish propaganda that were last seen when Arafat was alive.
At the same time, rocket attacks are increasing at an increasing pace. You put it all together it looks like the moderate Killer Mr. Abbas, is trying to prepare his people for a war. All at the same time he is “selling the world” (and Olmert that he is a peace-maker).

“Oh, Lord, martyrdom is [being done] for you,” crooned a singer, while pictures of prominent Palestinian women suicide bombers, clad in white, floated beatifically across the screen.

It was part of a music video aired today (April 22, 2006) on the PBC television network under the direct control of Mahmoud Abbas, the PLO Chairman and Palestinian Authority leader. The same video had appeared in the past, but had disappeared after protests from Israel and the United States, but it has now returned, and it is not alone.

Voice of Palestine radio, also controlled by Dr. Abbas and his Fatah movement, have resumed regular airing of the song “Felastin Arabiyyeh”-Palestine is Arab-which includes specific praise for “martyrs” acting against “the cowardly enemy.”

And the broadcasts of PBC television and V.O.P. radio have for the last month left no doubt who that enemy is. It is Israel, which is increasingly called “al-‘udu al-sihiyouni” (The Zionist Enemy) or “al-kayaan al-sihyouni” (The Zionist Entity) or simply “al-‘udu”-The Enemy.

“The only language the enemy understands is force,” declared several different members of Abbas’s Palestinian Authority cabinet in broadcasts dedicated to “The Day of the Prisoner” in the last three days.

While PLO Chairman Abbas has told Israeli officials and American officials that he is working for the release of kidnapped Israeli soldier Gilad Shalit, Palestinian officials appearing before Palestinian audiences say that the Palestinians are entitled to use the “Zionist soldier” [Arabic-al-jundi al-sihyouni] to extricate thousands of convicted Arab terrorists from Israeli jails.

Palestinian rocket attacks on Israeli towns in the Negev, such as today and yesterday, are ignored in the Palestinian media, while Israeli strikes at the rocket launchers or terrorists trying to infiltrate bombs into Israeli cities are regularly condemned as “aggression,” and the terrorists are lauded as “martyrs” and noble citizens.

“Nine more martyrs reached the heavens in the last 48 hours,” observed Voice of Palestinian radio, referring, in part, to a rocket crew that had attacked the Israeli town of Sderot, destroying a house.

“These are crimes against humanity,” declared Dr. Mustapha Barghouthi, the PA Information Minister, in a statement to the foreign press, referring to the Israeli “assassination” of members of the rocket crew in Gaza and armed terrorists in the West Bank towns of Nablus and Jenin.

There are also indications that mosque speeches broadcast by the PA media are turning back to the anti-Semitic themes which regularly appeared during the leadership of Yasser Arafat and the early leadership of Abbas, and it seems there is scant difference between the messages of Abbas’s Fatah movement and the Hamas movement.

“The Day of Judgment will not arrive until the Muslims fight the Jews and kill them, until the Jew hides behind the stones and the trees; and each stone or tree will say: Oh Muslim, Oh servant of God, there is a Jew hiding behind me, come and kill him; except for the gharqad, which is the tree of the Jews.”.

Israeli Army intelligence reported that during the second half of March there was an increase in the number of rockets fired at Israeli settlements in the western Negev (22 confirmed rocket strikes), following a relative reduction in attacks of the first two weeks of March (12 confirmed rocket impact points).