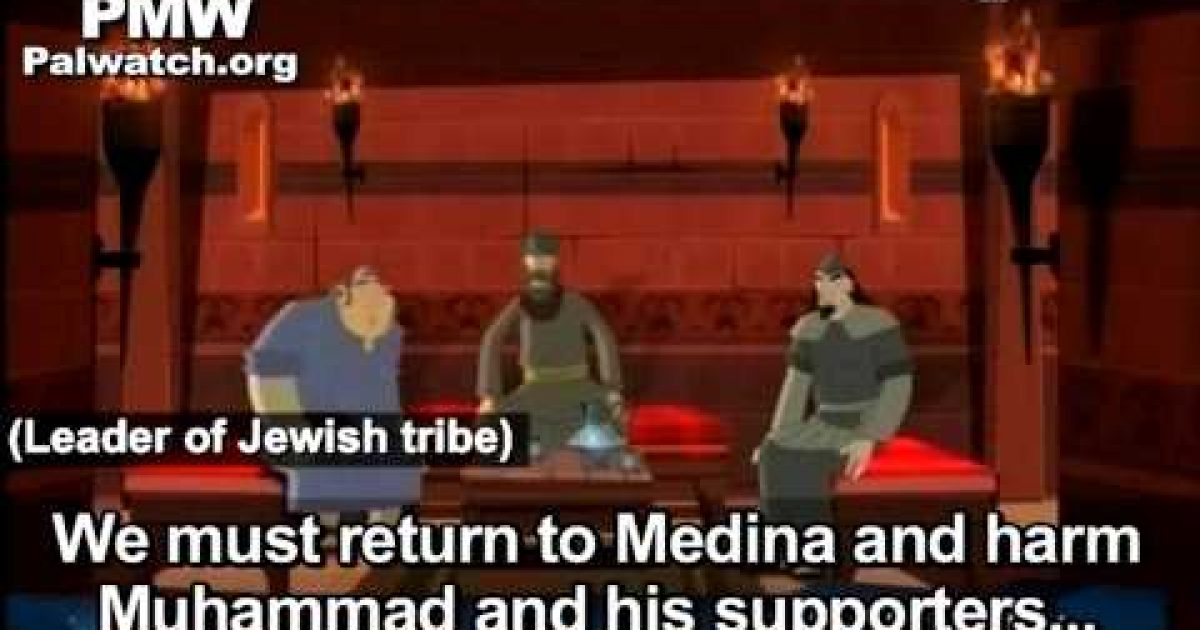 One episode taught children that the Devil and the Jews were on the same side, both desiring the defeat of Muhammad. The cartoon shows the Devil ecstatic because he saw that the Jews who were filled with “hate and loathing” for Muhammad schemed to unite the Arab-pagan tribes to fight Muhammad.

Another episode taught children that “Jews” do not “keep treaties.” In the episode about Muhammad’s “Battle of the Trench,” one boy explains that Muhammad is digging a trench to protect Medina on its vulnerable northern side. Two other sides of the city are protected by “mountains, gardens and date trees,” and the boy implies that the third side is also protected because “the Qurayza,” a Jewish tribe, live there. The second boy asks if “the Prophet trust[s] the Qurayza?” The first boy answers that the Jews of this tribe “have a treaty” with Muhammad. The second boy’s answer teaches the viewers that Jews are not to be trusted:

“Since when do Jews keep their treaties? Have you forgotten [the tribes of] Qaynuqa and Nadir?”

PA TV broadcast this series at the time of peace talks between Israel and the Palestinians.

Note: Amidst the Arab pagan population of Medina, there were also three Jewish tribes. In the year 625 Muhammad exiled the Jewish Qaynuqa and Nadir tribes. Soon afterward, he captured the Qurayza tribe and had the 750 male captives decapitated and the wives and children sold into slavery. Islamic tradition justifies Muhammad’s actions, teaching that the three Jewish tribes broke treaties with Muhammad.

Click to see more examples of demonization of Jews in Palestinian society.

The following are excerpts of the two episodes of the cartoon:

The Devil: “I’ve built my plan on the burning hate and loathing of Muhammad and his supporters that fills the hearts of the Jews… “
[The Devil hovers above the Jews]
Jew: “We have lost our prestige because of Muhammad…”
Leader of Jewish tribe: “We must return to Medina and harm Muhammad and his supporters… There are [Arab-Pagan] tribes that want to destroy Muhammad and the ones who want that the most are the Quraish and their allies… These tribes are not small and they have a major conflict with Muhammad. If they unite, it will be possible to destroy Muhammad.”
Jew: “And then we’ll return to Medina and go back to being prestigious leaders.”
Jew: “A wise idea.”
Leader of Jewish tribe: “So let us go to the tribes and prepare for the war with Muhammad…”
[Official PA TV, July 29, 2013]