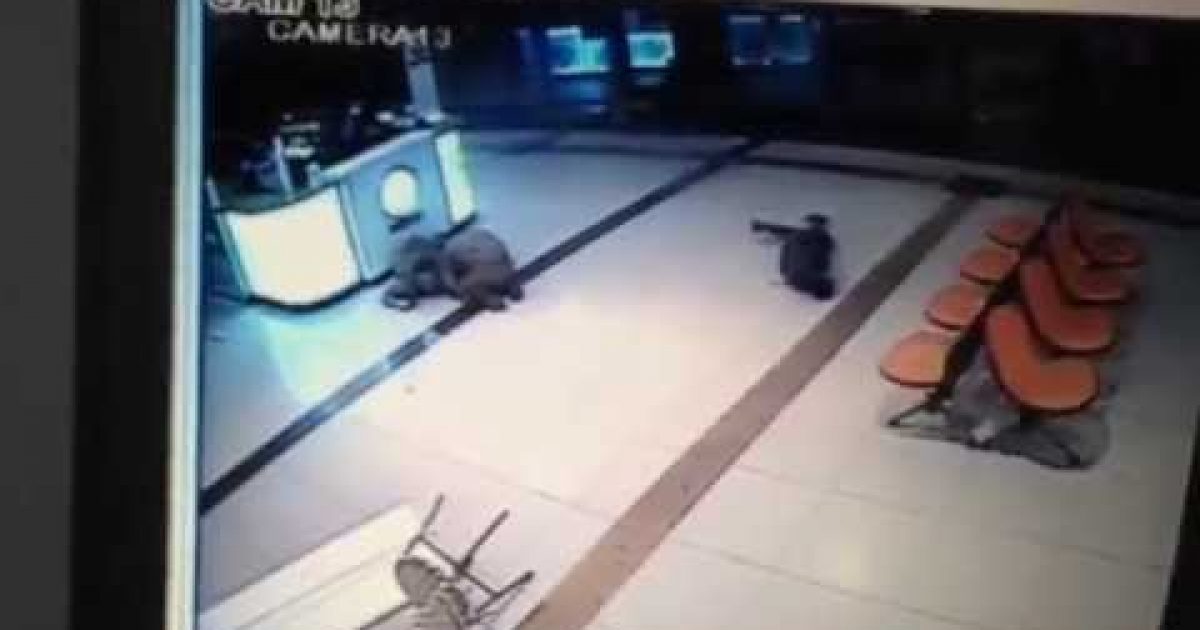 Two Palestinian terrorists opened fire on passengers at the central bus station in Israeli city of Beersheba Sunday evening, injuring at six people and killing one. According to the police the two terrorists were armed with a rifle, a pistol and knives.

Note: this post contains three videos of the attack and its aftermath.

When they got to the bus station the two terrorists split up and began attacking in two different areas in the building.

A large number of Magen David Adom paramedics and police are at the scene, and are delivering emergency first aid to victims, some of whom have already been evacuated to Soroka hospital.  According to the EMTs they treated two people in serious condition, two in moderate condition, and another two with light wounds. Four of the six people injured were cops.

One of the terrorists  was shot dead by security forces, while the second attacker was critically wounded after a short firefight.

The question is what will president Obama say about the attack, will he blame the Jews for bleeding on the floor?  All week the administration has been blaming Israel for the surge in Palestinian terrorism (and having to walk back their statements) while ignoring the fact that the Palestinian leadership has been inciting the violence.

The Tower describes the inaccurate statements coming from the Obama administration.

The most prominent of these statements came from Secretary of State John Kerry, who in a speech at Harvard on Tuesday appeared to blame the violence on Israeli settlement construction. “What’s happening is that, unless we get going, a two-state solution could conceivably be stolen from everybody,” he said. “And there’s been a massive increase in settlements over the course of the last years, and now you have this violence because there’s a frustration that is growing.” Kerry made his statement the same time that Ha’aretz reported that settlement growth since Israeli Prime Minister Benjamin Netanyahu returned to power in 2009 has been the lowest in nearly twenty years. Kerry’s statement also ignored the role in Palestinian incitement in driving the anti-Israel violence. At a press conference the following day, White House spokesman Josh Earnest said that Kerry’s implication wasn’t his intent: “Secretary Kerry didn’t assign any specific blame for the recent tensions there,” Earnest said.

That same day, State Department spokesman John Kirby attributed the violence to Israeli actions, charging that “The status quo has not been observed, which has led to a lot of the violence.” Palestinian terrorists have said that they were motivated to act due to supposed Israeli threats to take over the Temple Mount or change prayer practices there – an idea that Palestinian leaders have repeatedly promoted, despite consistent denials from Israeli officials, including Netanyahu. Later in the day, Kirby tweeted, “Clarification from today’s briefing: I did not intend to suggest that status quo at Temple Mount/Haram Al-Sharif has been broken.”

At the same press conference, Kirby said, “We’ve certainly seen some reports of what many would consider excessive use of force” used by Israel. He later retracted this the following day, saying, “We have never accused Israeli security forces with excessive force with respect to these terrorist attacks.”

It is interesting to note that the uptick in violence began soon after the Democrats in congress blocked the attempt to stop the nuclear deal which allows Iran to develop a nuclear bomb.  Coincidence? Or has the appeasement of terrorism shown by this president over the past 6 and a half years given the Palestinians the encouragement they needed to attack innocent Israelis.