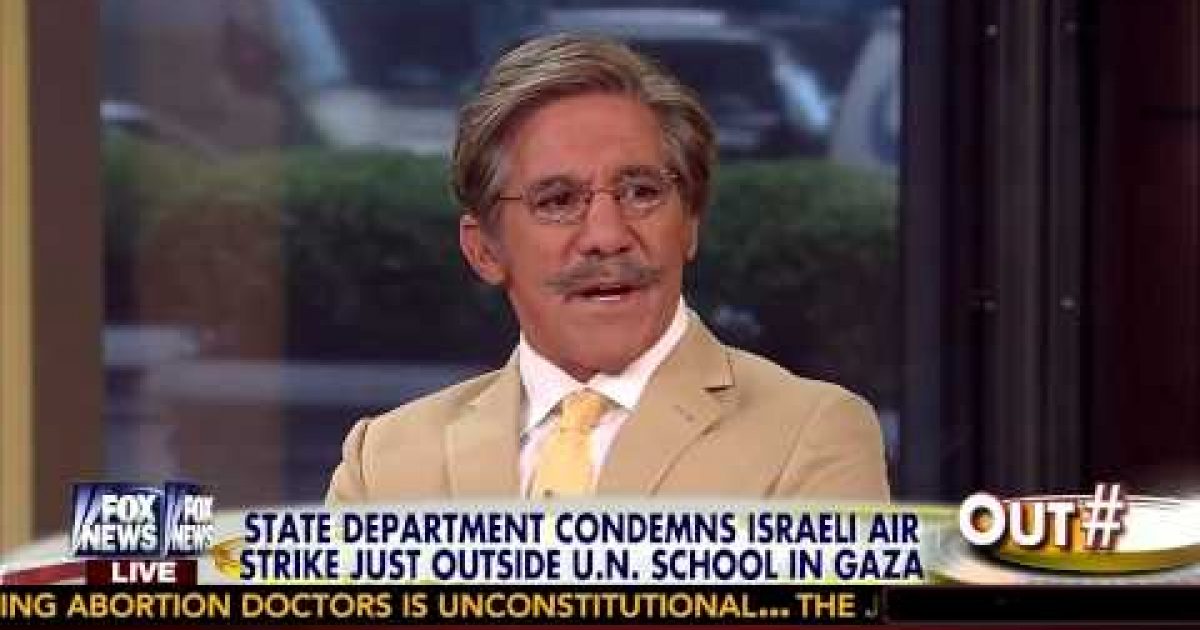 “Aside from the stinking, anti-Semitic implications that I see in that whole New York values money and media coded message that he put out there.”

In an earlier post we discussed the idiocy of any claim that Ted Cruz is anything but pro-Jewish or pro-Israel, the purpose of this post is to discuss the appropriateness of Geraldo Rivera calling anyone anti-Semitic because he is a man with little appreciation for his Jewishness or for the nation of Israel.

Geraldo Rivera (nee Gerald Riviera from Babylon Long Island) portrays himself as being the ultimate Zionist, based on the fact that his mother was Jewish and he had a Bar-Mitzvah when he was 13 (because his mom was Jewish, Rivera is also considered Jewish by Jewish law as religious linage is determined by the mother).

But then again the liberal Rivera says he is a Republican, despite the fact that he spouts liberal views. The Fox news in-house progressive exhibits little affection for the Jewish State, but loves to announce that he is a long-time Zionist immediately before he throws Israel under the bus. Geraldo from Babylon is textbook passive/aggressive.

For example, he exhibited his typical passive/aggressive behavior during an appearance on Fox and Friends in 2010. He began by saying how well he knew Israeli PM Binyamin Netanyahu, then threw the truth out the window to trash Bibi and Israel :

Doocy: Obama wants to get some concessions on settlements. You have known Bibi Netanyahu for many, many years.

Rivera: Since 1972, I know him far better than I know the President. I’ve only met our President one time. Bibi and I have smoked cigars in this building together. \ We’ve hung out together in Jerusalem and in Tel Aviv. I knew his family, his hero brother died in Entebbe.

Geraldo used to say that he knew Michael Jackson’s family I wonder if the three families got together for Passover Seder.

Mr. Rivera, I don’t want to burst your bubble but Bibi Netanyahu is a politician, he “hangs out” with lots of people, that doesn’t mean he’s their friend.

Additionally, you may have been trying to show you are an insider by mentioning that Yonatan Netanyahu lost his life during the Entebbe rescue, but everyone knows that, it was in all of the papers, heck it was even a made-for-TV movie, but I am sure Bibi appreciated phony name dropping.

Rivera was responding to a Steve Doocy question about Israel adding additional housing units to an already established community in Jerusalem (something that was agreed to as Kosher during the adminstration of Bush #43):

But here’s the dirty little secret folks and I think this is what has been revealed. I don’t think Bibi Netanyahu has any intention of making a two state solution peace with the Palestinians. I think he has no intention of ever yielding east Jerusalem. I know it’s very difficult for my fellow Zionists and lovers of Israel to get our arms around what is a clear cut agenda. I think what has been revealed by this snub of Joe Biden when he went over there is far more profound than people credit. I think that what has been revealed is the policy of the Netanyahu government never to make peace with the Palestinians based on a two-state solution, never to give up Jerusalem, never, ever ever and, you know, for them to go through the machinations or continue to point to the Iranian threat as their priority is just to divert attention from the fact that there will never be under a Netanyahu or a Likud government any kind of a two state—

Youou gotta love his technique, establishing his credentials and then the lies. Let’s look at the facts.  Bibi Netanyahu announced his support for the two-state solution many times since he became Prime Minister, and the last time he was in the office he signed an agreement with the terrorist Yassir Arafat, called the Wye River Memorandum that moved the PLO closer to statehood by mapping out the implementation of Oslo.  He also gave the PLO control of much of Hebron which, until the Jews were massacred in the city in 1929 had always been a Jewish city.

Geraldo mentioned Jerusalem. With the possible exception of Levi Eshkol who died less than two years after the 6-day-war, every Israeli Prime Minister built in Jerusalem. When he talks about the lack of peace because of the death of Rabin that is a lie. It is true that Rabin negotiated and signed the Oslo Agreement, but Rabin was against the creation of a Palestinian State, he was against dividing Jerusalem, in fact he said so in a speech to Knesset just a few weeks before he was assassinated.

Even his claim about Likud was false. Since the creation of Israel there have been four Likud Party Governments. The first, Menachem Begin made peace with Egypt. Binyamin Netanyahu during his first administration, signed the Wye agreement. Number three, Ariel Sharon gave Gaza back to the Palestinians even though it had originally been part of Egypt. Sadly that resulted in only for it to become a terrorist base. Finally it is back to Bibi.

Perhaps Geraldo’s most famous anti-Israel performance was his rant about the al Dura hoax. The reported shooting of a Palestinian boy by the IDF that turned out to be a hoax perpetuated by a French reporter and a Palestinian cameraman. When a few months after the incident was first reported, Mr. Investigative reporter was interviewed by Brit Hume where he condemned Israel without seeking the truth, and made the memorable statement, “I’ve also become a Palestinian-ist.”

Hi, Brit. I think you characterized my evolution in thought quite accurately. The catharsis for me was that video — I’m sure you remember — of the Palestinian father huddled with the child…..You remember that infamous video of some months ago, that showed a Palestinian father huddled with his 7- or 8- or 9-year-old son against the wall, caught in a crossfire between the Israelis and Palestinians who, at the time, were shooting back, were throwing rocks at the soldiers. By the time that video ended, that young boy was dead and the father severely injured. Now, I have been, as you suggest, a Zionist my entire life. I would die for Israel. But watching the suffering of the Palestinian people, the real suffering of these people, I’ve also become a Palestinian-ist, in a sense.

If you watch FNC you know that Geraldo insists there there is still not enough evidence to claim that Hillary Clinton did anything wrong in the email scandal which has been going on for over a year. But he was real fast to blame Israel for a video that turned out to be a fraud.

Whenever he is confronted with his anti-Israel positions, Geraldo leans on his Jewish background to prove he is an Israel defender.

In a 2014 appearance in Outnumbered, Geraldo Geraldo Rivera claimed that Israel’s imprecise attacks on Gaza (his words not mine) had brought a decline in its international support, including from the U.S., which rushed to call an attack on a UN School (which was the source of mortar fire towards the IDF), “disgraceful.”

Later, Andrea Tantaros confronted Geraldo about his stance and an argument ensued:

Tantaros: Geraldo, let me please speak. They put these kids in a school, put weapons deliberately in a school, then Israel strikes and people like you get up and defend a terrorist organization.

Tantaros: An apologist for a terrorist organization.

Actually what is really appalling is that the Jewish Geraldo Rivera used a Jewish Star tattoo to prove his Zionist credentials.  If Geraldo remembered his bar mitzvah lessons he would have remembered that tattoos are banned under Jewish law. The source of this prohibition is Leviticus 19:28: “You shall not etch a tattoo on yourselves.” This prohibition applies to all tattoos besides those made for medical purposes, such as to guide a surgeon making an incision or forced ones, such as the ones the Nazis branded Jews with in concentration camps.

There is a lesson Geraldo should remember from the ancient Yom Kipper services when there was a Temple to God atop the Temple Mount in Jerusalem. As the story is told during every modern Yom Kippur service. The High Priest would start by asking forgiveness for his sins, followed by those of his family, then those of all of the Priests, and only then he would ask God to forgive the sins of all the Jewish people.

Perhaps Geraldo should “fix” his own attitudes to Israel and Jewish tradition before he makes false accusations about others.