Palestinian Imam’s Lesson Jews Prepare Their Matzah With The Blood Of Children (Does New-Jew Obama Care?) 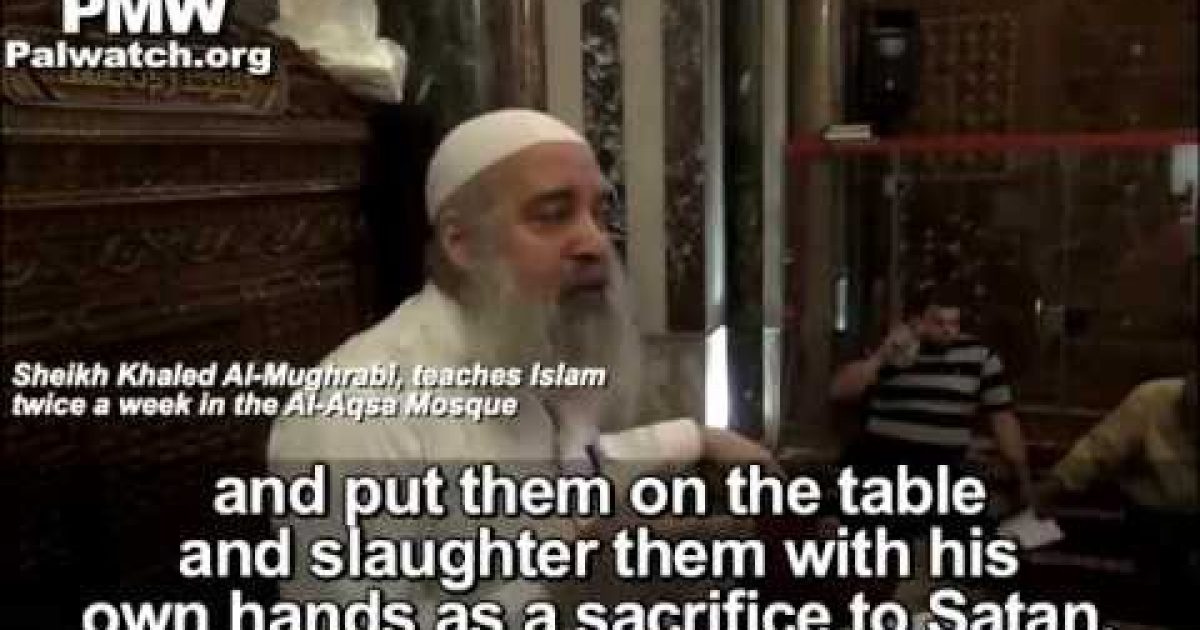 President Obama (now a Jew?) likes to criticize Israel every time someone in the Jewish State gives a dirty look to a Palestinian.  I wonder if he will comment about this story about hate speech coming from the Palestinians especially now that he considers himself a “member of the tribe.”

As reported by Palestinian Media Watch this latest absurdity takes place at the site of the Holy Temple to God, the holiest site in all of Judaism now the site of a Muslim Mosque.

Sheikh Khaled Al-Mughrabi teaches two religious classes a week at the Al-Aqsa Mosque. This past Friday, the Sheikh chose to demonize Jews as the epitome of evil – basing his teachings on both Western and Muslim Antisemitism. The Sheikh presented the blood libel that Jews make Passover matzah bread from the blood of children as fact:

“These stories are known. There is proof of them… Write: ‘Jews’ bread’ in Google… You will see all of these stories, and for all of them there is proof and evidence, with dates and police files in which the material is found.”

Below is the entire hate speech, and subtitled video, all translated by Palestinian Media Watch

“The Children of Israel have more than one god… They say that our god is number ten. It’s an internal [secret] matter of theirs…

They have smaller gods, from one to nine, and they have gods who are stronger than Allah, from 11 to 34. Devil or Satan is number 11 for them. If you look at history, my brothers, you’ll see that the number 11 is holy for the Jews, and 666 is also a holy number, three times six signifies the Devil.

These two numbers, 11 and three times six, are holy numbers. Everything they wish to happen, or that they want to do and succeed at, they try to make happen on the 11th of the month… Therefore, notice the attacks on America (i.e., 9-11 attack on World Trade Center) that took place. When were they? On the 11th of the month. Why? Because who was behind them? … It’s known that the Jews were behind them. The evidence discovered afterward points to the fact that the Jews were behind the attack…

I will show you the ways of Satan, through which he deceives the Children of Israel… The first way is the promise of eternal life… The American film industry is owned by the Children of Israel. Among the most notable film [themes] that this film industry focuses on is the idea of eternal life. You can see films, all of which are about vampires. On what is this idea based? On the fact that if you killed a human being and drank his blood in a certain way, you would attain eternal life. Why did Satan put this in their minds? To cause them to spill each other’s blood. One will kill the other and drink his blood, and thus attain eternal life…

The Children of Israel had the holiday of Pesach, what is now called Passover. Every holiday, every group would look for a small child, kidnap and steal him, bring a barrel called the barrel of nails… They would put the small child in the barrel and his body would be pierced by these nails. In the bottom of the barrel they would put a faucet and pour the blood… The Devil or one of the big gods, demanded it of them as a condition for fulfilling their wishes, that they eat [matzah] bread kneaded with the blood of children.

On the holiday of Passover it is forbidden for them to eat regular bread. They prepare their matzahs. These matzahs were not kneaded in the regular way, but rather with the blood of children. When these stories were exposed, the Children of Israel were expelled from all of Europe and the tragedy of the Children of Israel began in all Europe. In the end it reached the point where they were burned in Germany, because of these things, because they kidnapped young children. These stories are known. There is proof of them. They are in court files. There were a lot of trials against the Children of Israel in these matters. You can see a long list of these stories. Even though there is a news blackout about them, they are on the internet. Write: “Jews’ bread” in Google, “Jews’ bread” or “Jews’ matzah” … You will see all of these stories, and for all of them there is proof and evidence, with dates and police files in which the material is found…

The Freemason lodges are witchcraft gatherings of the Children of Israel. One of the ceremonies, for instance if someone wants to be accepted as a new member, or rise in rank… he has to somehow bring one of his sons or daughters, or his wife or one of his male or female relatives, and put them on the table and slaughter them with his own hands as a sacrifice to Satan, in order to rise in the ranks of the Freemasons. My brothers, this exists until today.”

The Fraud Of Experimental COVID Shots: Slowly But Surely, The Truth Is Coming Out
April 16th, 2021 Sons of Liberty Media