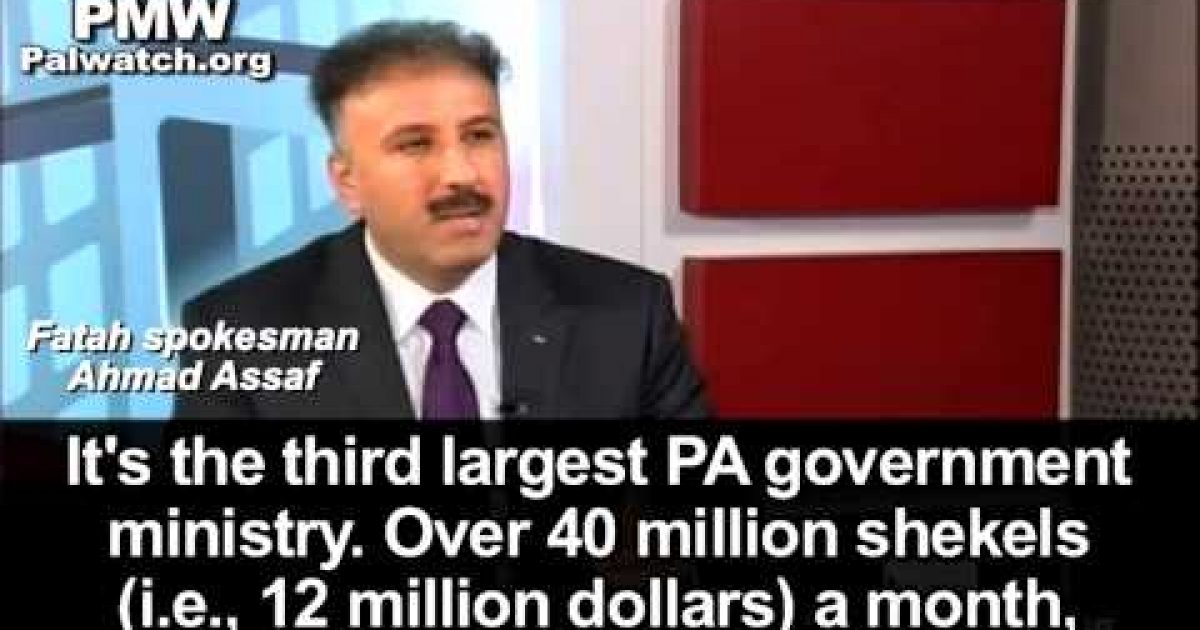 Earlier this month Palestinian Media Watch reported the Palestinian Authority (PA) was considering nefarious ways to avoid Western pressure and continue providing income to terrorists. In the three weeks since, PA leadership confirmed that they would indeed use Western donor nations’ money to pay terrorists. PA government spokesman Ehab  Bessaiso  explained that the change of “the Ministry of Prisoners’ Affairs” under the PA into “the Authority of Prisoners’ Affairs” under the PLO would “provide political and legal cover” and “eliminate arguments … that [foreign] aid money [to the PA] is going to the prisoners.”

Appearing on the Official PA TV station Bessaiso explained that the money will continue to flow to terrorists (video above):

TV host: “What was proposed on the issue of the Ministry of Prisoners’ Affairs, and that it should be under the PLO?”

Bessaiso: “The change of the Ministry of Prisoners’ Affairs into the Authority of Prisoners’ Affairs is not the [PA] government’s issue, but the PLO’s issue. The Palestinian government is part of the PLO… [The change] will provide political and legal cover for this issue. In addition, it eliminates the many arguments made by many parties, who always try to say that [foreign] aid money [to the PA] is going to the prisoners, to cover the prisoners’ expenses. We all owe it to the prisoners to protect their rights and fulfill their due. They spend years in prison and pay the price. The question isn’t the name, or the role, but rather, the framework for the political distribution of roles regarding these issues. When we talk about the prisoners, we are talking about a basic component of Palestinian political activity.”

TV host: “None of the prisoners’ rights will change. Only the name has changed. Instead of calling it “Ministry,” we call it “Authority,” but the [prisoners’] salaries will continue to flow, everything will continue – all the allowances… People are concerned about their livelihood; that it may be cut off. We clarify it for them that nothing will harm the prisoners; their rights – under a ministry that became an authority – will remain the same.”

Bessaiso: “If you want me to put it simply, then yes, that was [put] simply.”

A few days later. a spokesman for the ruling Fatah Party, Ahmad Assaf, explained in an interview the major sum of money paid out to terrorists and their families, saying:

The Ministry of Prisoners’ Affairs established under the PA has the third largest monthly budget in the PA. It’s the third largest PA government ministry. Over 40 million shekels (i.e., 12 million dollars) a month, which the PA pays the prisoners, the released prisoners and their families.

At a House Committee on Foreign Affairs Subcommittee hearing last month, Congressman Randy Weber (R-TX) asked State Department Assistant Secretary Anne Patterson, “If the PA is paying for terrorists in prison, we ought to also be willing to hit them with some economic sanctions of that sort?” She answered, “Frankly, I know that they’re going to try and phase that out and we should give them an opportunity to do so.”
Now that the PA has admitted that they aren’t phasing out their “cash for killers” program, perhaps its time for State Department which helped to legitimize this Palestinian Government which includes Hamas, to reevaluate their stance on dealing with this terrorist cabal.
Facebook Twitter Flipboard