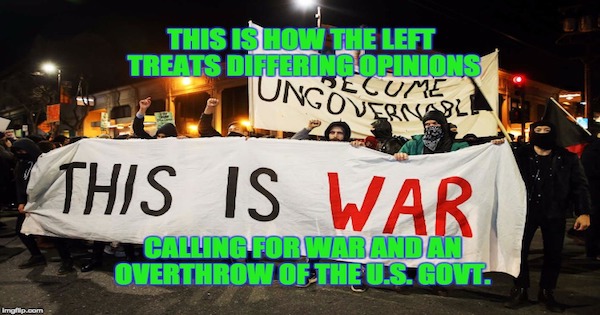 I’m not sure when it happened, but our country has taken a severely dangerous turn. In years past, conservatives, Tea Party supporters, and other shades of America’s right-wing have complained about the growth of government, the Democrat trend toward socialism, and the attack on our natural rights. The right wing has at times used harsh terms, but none but the most fringe have ever argued for the overthrow of government or the upending of a lawfully elected administration.

Sadly, the same cannot now be said for liberals.

Finding themselves in a minority party role for the first time in almost 15 years, it seems that the Democrat left has completely lost control of their senses. Just two weeks in to the Trump administration’s tenure and once “mainstream” voices on the left have actually begun to call for a physical coup, or overthrow, of the duly elected Trump administration.

In a post for Foreign Policy magazine, former Obama administration official Rosa Brooks outline four ways to “get rid” of President Trump, her last suggestion being the most outrageous (though they were all ridiculous),

“The fourth possibility is one that until recently I would have said was unthinkable in the United States of America: a military coup, or at least a refusal by military leaders to obey certain orders.”

This was someone who had actually worked in the Obama administration, folks! They’re not playing around. It wasn’t just Ms. Brooks though, as countless of celebrities have also thrown their hats into the insane and treasonous ring.

And there are others…. 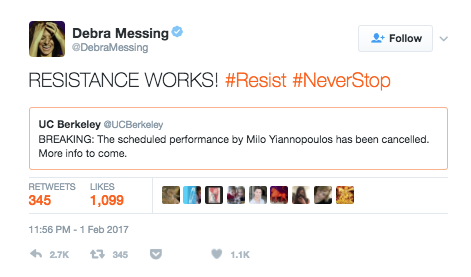 Lexi Alexander apparently believes all conservatives are also Nazis who deserve to be physically assaulted. She also fails to realize the irony of her own tweets. Here she incites people to violence, but in her next tweet says that the people she was calling for violence upon were the real inciter. 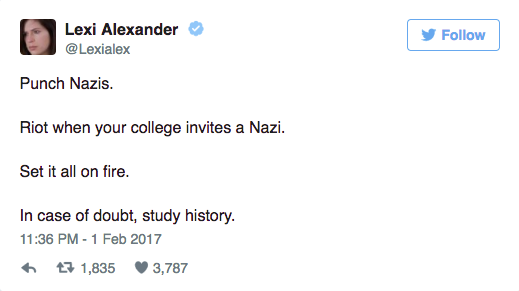 I guess the Lexi doesn’t realize the speaker at Berkley who she is calling a “Nazi,” Milo Yiannopoulos, is Gay and Jewish, which means the Nazis would have killed him twice.

It seems to me that the Berkeley PD should be putting out an arrest warrant for Lexi Alexander. She pushed rioters to violence, or “incited” them to violence. That is a crime… but I won’t hold my breath to see if justice is done.

I guess we shouldn’t be surprised though. I mean they did try to warn us. Liberals whined that if the American people elected Donald Trump as President, the left would get violent. Here’s just one of those warning from back in July, made by a fake Black Guy. 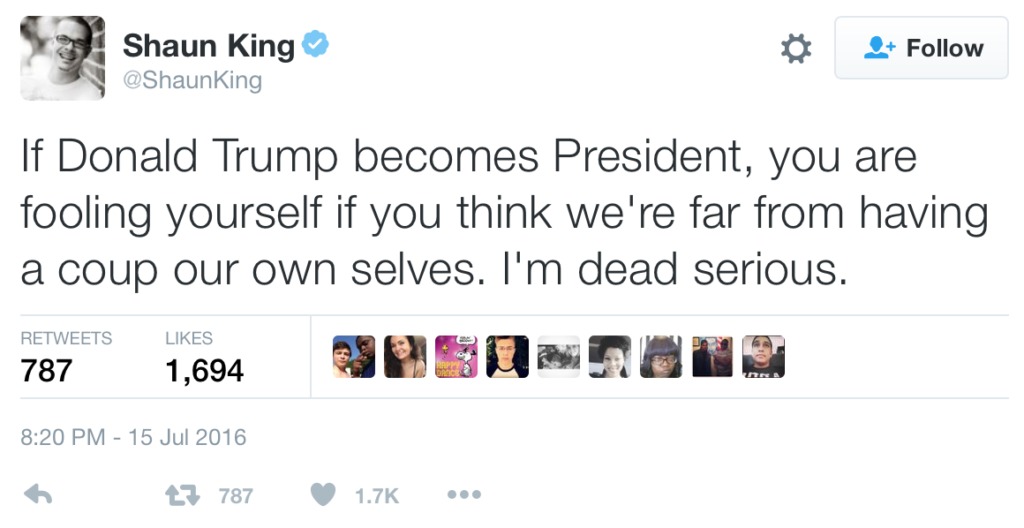 Apparently, democratic principles only matter if you’re side wins every election. If you’re not an identity politics embracing, godless, pansexual liberal… you’re opinion does not matter. Folks, I hope we are all prepared for the onslaught of hate that will continue to pour out from the left in the coming days, weeks, and months. These disgusting provocateurs will continue to inundate us with vitriol and disdain until we either give in to their demands or we stand up and prove to them that their hate-mongering will not work. Stand together friends, stay strong, and keep fighting the good fight. Love really DOES trump hate, and we can prove it by defeating the liberal hate with our tried and true conservative principles.