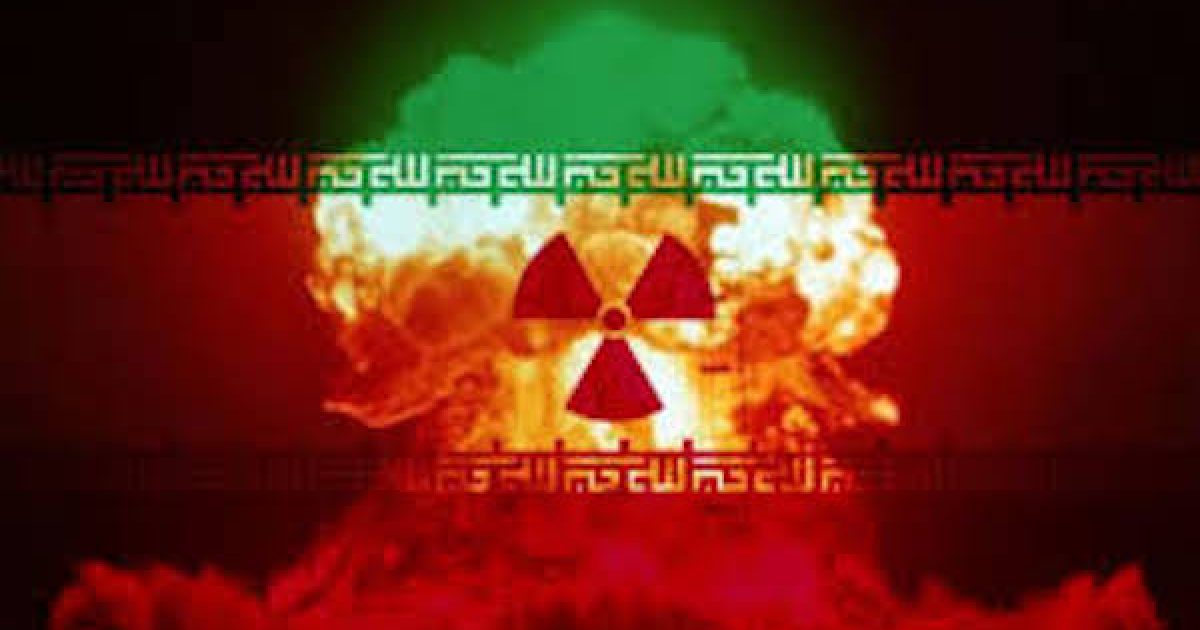 In just a few hours (tentatively scheduled for 12:30p) President Trump will give a speech about Iran. Rather than focus solely on the JCPOA Iran deal, the President will present a comprehensive strategy about how the United States will deal with the rogue nation and best protect the American people. The White House has provided an overview of the strategy which I’ve laid out and added context below.  When the President addresses the nation later today, he will not only discuss the objectives and the strategies reflected below but will add some of the tactical elements he will propose to reach those objectives. And while not yet mentioned by the White House strategy piece, it is still expected that part of his address will include his decision not to certify the Iran deal.

According to the White House, this new Iran strategy was developed in consultation with the national security team who received input and deliberated with members of Congress and our key allies.

The key elements of the strategy:

This strategy was developed after a full analysis of the present Iranian situation, how it got there,  where it sees itself in the world, and how it tries to achieve its goals.

Make no mistake about it, this is Ali Khamenei’s regime which he developed based on his image of what Iran should be. Khamenei’s been Iran’s Supreme Leader for twenty-eight years and before that, he held the office of President for 8 years. During the past thirty-six years, Khamenei and the IRGC have pursued a steady policy of spreading their revolutionary ideology aimed at undermining the international system and many states by force and subversion. Khamenei’s main enemy and rallying point has been and continues to be the United States of America— the Great Satan.

Khamenei’s methodology includes exporting violence, destabilizing its neighbors, and sponsoring terrorism abroad. Internally, under Khamenei’s iron-fisted rule the Iranian government has oppressed its people, abusing their rights, restricting their access to the internet and the outside world, rigging elections, shooting student protesters in the street, and imprisoning political reformers like Mir Hussein

Internally, under Khamenei’s despotic iron-fisted rule the Iranian government has oppressed its people, abused their rights, restricted their access to the internet and the outside world, rigged elections, shot student protesters in the street, and imprisoned political reformers like Mir Hussein Musavi and Mehdi Karroubi.

This Iranian regime and the IRGC, in particular, poses one of the most dangerous threats to the interests of the United States and to regional stability. It’s taken advantage of regional conflicts and instability to aggressively expand its regional influence and threaten its neighbors with little domestic or international cost for its actions. This occurred most recently following the emergence of the Islamic State of Iraq and Syria (ISIS) from the vacuum created by the Obama administration’s politically motivated withdrawal from the region which ignored the facts on the ground.

The full range of the Iranian regime’s hostile activities extends well beyond the nuclear threat it poses, including:

The previous Administration’s myopic focus on Iran’s nuclear program to the exclusion of the regime’s many other hostile activities allowed Iran’s influence in the region to reach a high-water mark.

Over the last decade and a half, United States policy has also consistently prioritized the immediate threat of Sunni extremist organizations over the longer-term threat of Iranian-backed militancy. In doing so, the United States has neglected Iran’s steady expansion of proxy forces and terrorist networks aimed at keeping its neighbors weak and unstable in hopes of dominating the greater Middle East.  Recently, the Iranian regime has accelerated the seeding of these networks with increasingly destructive weapons as they try to establish a bridge from Iran to Lebanon and Syria. 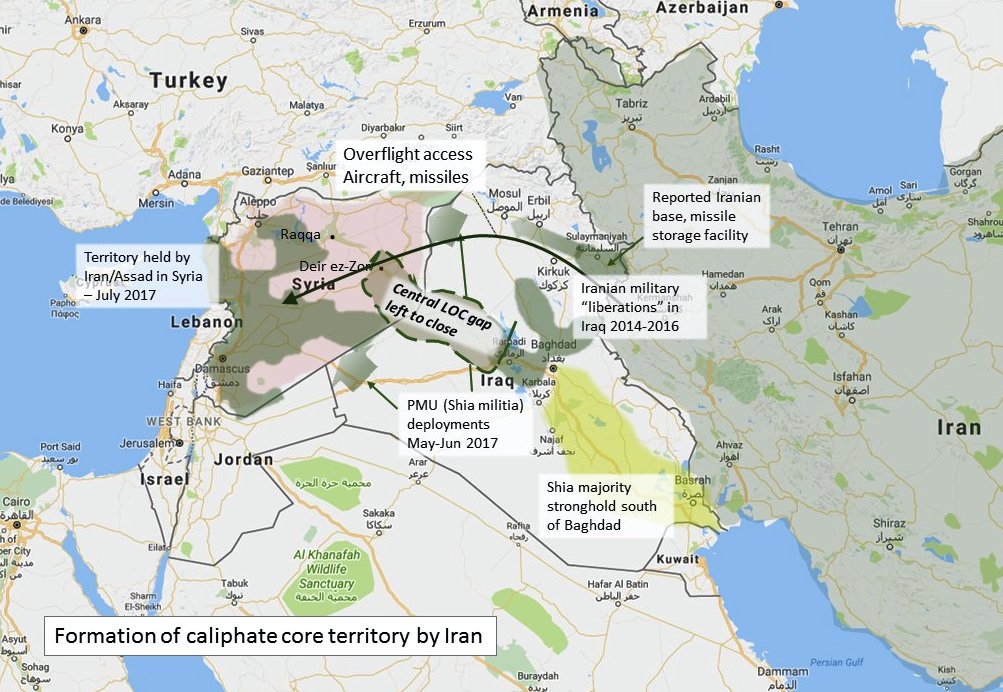 “How Iran’s geomilitary push in Iraq and Syria and attempt at a land bridge to the Mediterranean is building the core of a caliphate. (Source Liberty Alliance Post by J.E. Dyer, Google map; author annotation)”

The Trump Administration developed this strategy as to avoid repeating these mistakes. Its Iran policy will address the totality of these threats from and hostile activities by the Government of Iran and will seek to bring about a change in the Iranian’s regime’s heinous behavior. The U.S. will accomplish these objectives through a strategy that neutralizes and counters Iranian threats, particularly those posed by the IRGC, which is Supreme Leader Khamenei’s primary tool and weapon in remaking Iran into a rogue state has been the hardline elements of the IRGC.

Our partners in the international community agree with us that the IRGC’s reckless behavior threatens international peace and security.  They agree that the IRGC is fanning sectarianism and perpetuating regional conflict.  They agree that the IRGC is engaged in corrupt economic practices that exploit the Iranian people and suppress internal dissent, human rights, and Iran’s economic prosperity. For all these reasons, we want to work with our partners to constrain this dangerous organization, for the benefit of international peace and security, regional stability, and the Iranian people.

The Iranian regime’s activities severely undercut whatever positive contributions to “regional and international peace and security” the Joint Comprehensive Plan of Action (JCPOA) sought to achieve. Even with regard to JCPOA itself, the Iranian regime has displayed a disturbing pattern of behavior, seeking to exploit loopholes and test the international community’s resolve.

As explained last week on this site Iran’s implementation of key elements of the JCPOA cannot be confirmed because the countries military leaders have stated publicly that they will refuse to allow International Atomic Energy Agency (IAEA) inspections of their military sites which is where the regime conducts much of its nuclear weapons development  These statements fly in the face of Iran’s commitments under JCPOA and the Additional Protocol.   This behavior cannot be tolerated; the deal must be strictly enforced, and the IAEA must fully utilize its inspection authorities.

While the outline does not state what the President will say about certifying the agreement. It is still the belief of many this writer and many of his sources that President Trump will announce that he will not certify the JCPOA (Iran nuke deal) but he will not pull out of the deal either, giving Congress a 60-day window to determine whether or not to re-implement sanctions. Trump’s decision will be based on all the above concerns which prove the deal is not in the national security interests of the United States. However rather than recommend re-imposing sanctions, the word is that the POTUS will ask  Congress to establish “trigger points,” which could prompt the United States to reimpose sanctions on Iran if it crosses certain thresholds set by Congress.These Thresholds could include continued ballistic missile launches by Iran, a refusal to extend the duration of constraints on its nuclear fuel production, continued refusal to refuse inspections on military facilities,  or a conclusion by the United States’ intelligence agencies that Iran could produce a nuclear weapon in less than a year.

This type of program gives the president something he didn’t have before, some leverage over Iran to try and force “good behavior.” It also gives the President leverage to try and renegotiate parts of the JCPOA, as it shows the rogue nation they are no longer dealing with Obama and Kerry who capitulated so often they hurt their backs from bending over.

We will know for sure later today

President Trump will make good on Friday on a long-running threat to disavow the Iran nuclear deal that was negotiated by his predecessor, Barack Obama. But he will stop short, for now, of unraveling the accord or even rewriting it, as the deal’s defenders had once feared.

In a speech on Friday afternoon, Mr. Trump will declare his intention not to certify Iran’s compliance with the agreement. Doing so essentially kicks to Congress a decision about whether to reimpose sanctions on Iran, which would blow up the agreement.

But the Trump administration made it clear that it wants to leave the 2015 accord intact, at least for now. Instead, it is asking Congress to establish “trigger points,” which could prompt the United States to reimpose sanctions on Iran if it crosses thresholds set by Congress.

Those could include continued ballistic missile launches by Iran, a refusal to extend the duration of constraints on its nuclear fuel production, or a conclusion by the United States’ intelligence agencies that Iran could produce a nuclear weapon in less than a year.