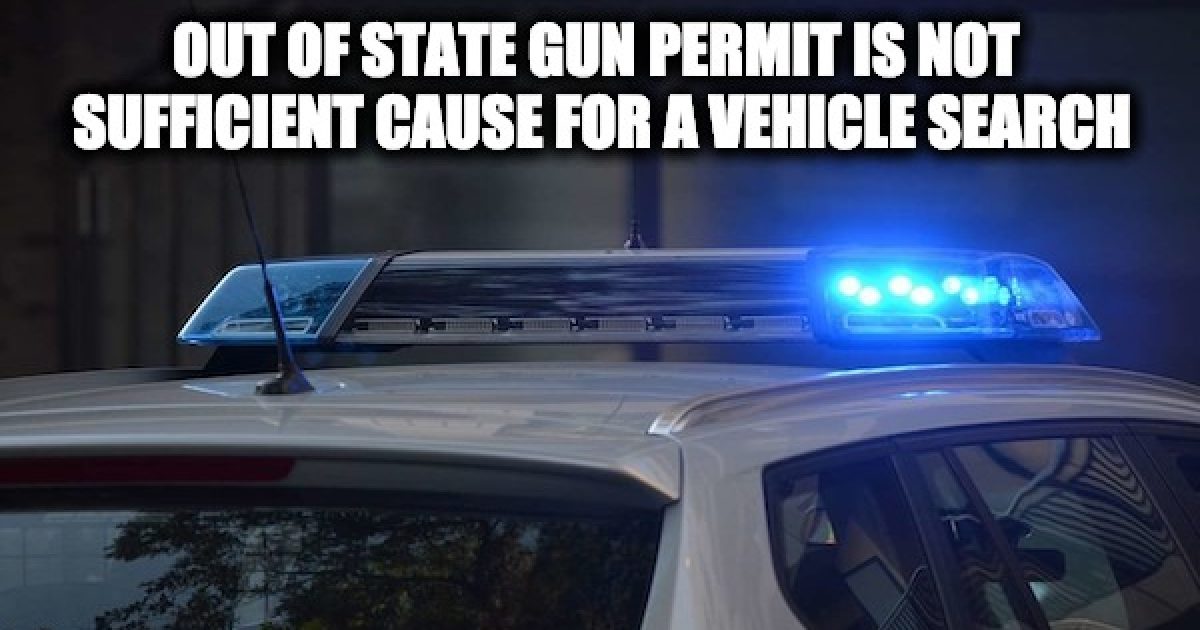 In a small win for gun owners, a New York court has ruled that owning an out of state gun permit is not enough “cause” for a New York cop to search a vehicle.

The incident that sparked the case was when a man who had recently moved to New York was pulled over by a Rye City, New York, police officer and when handing over his ID also handed the officer his Colorado concealed gun permit.

This is how Jonathan Rose, the man who was pulled over described what happened:

Not long after arriving in New York, I was driving down the road a few hundred feet from my rented house. I was stopped by the police for an improperly affixed to the front license plate, it was in the windshield as there is no front mounting place on my car.

When the officer stopped me and asked for license and registration, the police officer saw my out of state “concealed carry permit and my life was destroyed in an instant.”

The officer decided my CCW permit meant I was armed and dangerous and although I obeyed all instructions and was polite and courteous, he unconstitutionally searched my car,  arresting me for possession of my regular and backup FFL dealer, lawfully purchased handguns and for oversized 15 round magazines.

During my traffic stop, I videoed the interactions with the officer. When the officer searched the vehicle, he deleted the video. (We were, however, able to recover fragments with the help of Northeastern Cyber Data Recovery). Upon the DA’s office finding out we had recovered the video they ceased to deny that the officer had a  DashCam video and it suddenly became available. We now have detailed footage and audio recording of everything that transpired. I strongly recommend everyone get a dashcam it is invaluable on those occasions we badly need it (traffic stop, car accident, vandalism, someone hitting your parked car) This one uploads directly to the cloud so it cant be deleted by someone and you can monitor your kids while they are actually driving etc

The permit spurred the officer to launch an all-out search of the man’s car because gun laws in New York pretty much eliminate anyone’s Second Amendment rights.

But the man took the search and subsequent arrest on “illegal” gun charges to court. He said that the only reason his car was searched was that he had a Colorado gun permit. Now the state’s courts have agreed.

An out of state concealed carry permit does not establish sufficient cause to warrant a car search for firearms, a New York judge’s Decision and Order decided Wednesday. Further, the opinion concludes the sworn testimony of the officers involved is not borne out by police video camera and microphone evidence, and a recording from a defendant’s cell phone.

Because of the illicit search, the defendant, Jonathan Rose, was charged with

Police also lied in the commission of this search and their subsequent attempts to justify it. Police said that Rose lied to them about having a gun in the car and that “lie” caused the officer to search the vehicle.

But an audio transcript of the traffic stop shows that the officer asked Rose “do you have a gun on you,” and Rose said “no.” Rose was telling the truth. He was not carrying a gun ON his person. There was one in his car, but the cop did not ask if Rose had a gun in his car. He asked if Rose had a gun “on” him.

Rose is not clear of the charges yet, though. He has set up a GoFundMe page to help with his legal expenses.

Goldman Sachs CEO: We Will Deny Business to Companies with Too Many White Men on Their Boards
January 25th, 2020 Big League Politics

Busted: DNC Group Caught on Video Teaching Illegals How to Vote
January 25th, 2020 DC Clothesline
Thanks for sharing!
We invite you to become a Lid insider. Sign up for our free email newsletter, and we'll make sure to keep you in the loop.