The Other Anthony Weiner Scandal is Ignored By The Media

“This was a circumstance where someone committed a prank on the internet,” he told MSNBC’s Luke Russert. “I didn’t send [that] picture out” the congressman said, though he does not know who did. Is the photo of him? “I can’t say with certitude” he told Russert.

I will leave it up to the reader whether you believe his claim or not. (you can see the entire interview here). But there is an even bigger scandal surrounding the NY Congressman that has largely gone unreported, his use of earmarks to help campaign contributors.

In the interest of full disclosure, allow me to inform you that IMHO since he was first elected to congress, Anthony Weiner’s (D-NY) only major contribution to this country was getting bit on the hand by a goat on the Capitol Building Lawn. Actually that was the goat’s contribution wasn’t it? Now that Alan Grayson is gone, Anthony Weiner is the nastiest hypocrite in congress. 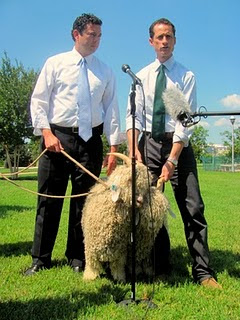 Weiner has been working hard pushing his position wives of Supreme Court justices have absolutely no right to work, not all justices of course just conservative ones. The big weenie of congress is leading 73 members of congress in a demand that Judge Clarance Thomas recuse himself from any Obamacare case that reaches the Supreme Court. Weenie believes the career of the Judge’s wife, Ginny Thomas who is a conservative political activist by trade.

“As members of Congress, we were surprised by recent revelations of your financial ties to leading organizations dedicated to lobbying against the Patient Protection and Affordable Care Act,” the Democrats wrote. “We write today to respectfully ask that you maintain the integrity of this court and recuse yourself from any deliberations on the constitutionality of this act.”

Weiner is basing his demand on the fact that Mrs Thomas is a tea party activist and a lobbyist  who has “experience and connections” and appeals to clients who want to overturn health reform (their words, not necessarily Mrs. Thomas’).

“Given these facts, there is a strong conflict between the Thomas household’s financial gain through your spouse’s activities and your role as an Associate Justice of the United States Supreme Court,” they wrote. “We urge you to recuse yourself from this case.”

Of course what they don’t say is that there is nothing wrong with Mrs. Thomas working for as a lobbyist or for the Heritage Foundation and the Judge wasn’t required do disclose his wife’s income, but did anyway.

The Mrs Thomas represents a conflict of interest ploy has been used before without sucess. During the Judge Thomas’ confirmation hearings, several Democratic Senators claimed that his wife’s job, then  with the Labor Department, might create a conflict of interest.  In 2000, she was working for the Heritage Foundation; and conflict-of-interest was again raised because she was collecting résumés for potential Presidential appointments in the George W. Bush Administration when the Judge Thomas was on the Supreme Court  deciding Bush v. Gore.

Its interesting that the congressman who co-sponsored the re-introduction of the equal rights amendment in 2007 believes that a woman cannot have an independent career when it’s politically expedient. And that is what this is all about…politics.  This move by the Weenie is really being made to preempt another recusal request, Judge Elena Kagan.

Kagan was solicitor general for the Obama Administration during the time the bill was being passed although she has claimed that she had no substantial legal involvement with the bill (of course she is the one defining substantial).  Congressman Weenie’s letter was trying deflect attention away from Kagan.

Weiner is not one to talk about conflict of interest.  In the 2009  spending bill Congressman Weiner sponsored $18.3 million in earmarks for 22 groups and projects,  over $500,000 of those earmarks went to campaign contributors.

An earmark of $238,000 for the Sephardic Addiction and Family Education (SAFE) foundation, which may or may not be an organization deserving of tax payer dollars. Of course the fact that  the organization’s board of directors have contributed more than $160,000 to Weiner’s various campaigns, may make it a bit more worthy in Weiner’s eyes.   Weiner also sponsored a $300,000 earmark for Brooklyn’s Ohel Children’s Home and Family Services, whose director, David Mandel, personally contributed $6,240 to Weiner’s political campaigns.

According to the NY Daily News:

At least four board officers of the Sephardic Addiction and Family Education (SAFE) Foundation have, together with their families and close associates, directed more than $160,000 to Weiner’s campaigns, including more than $100,000 for this year’s mayoral race.

“It smacks of pay to play,” said Steve Ellis of Taxpayers for Common Sense, an advocacy group that has railed against so-called “earmarks” in the federal budget that let lawmakers steer federal dollars to pet projects back home.

“You can’t prove and there may not even be a quid pro quo, but it does raise the specter of that in the minds of taxpayers,” Ellis said.

“People might make contributions to curry favor … to get federal dollars for themselves or their organization.”

When the story broke, Weiner declined to answer questions about why he chose this group for the funding, or about the campaign contributions.

His spokesman John Collins said in a statement: “It is an outrageous smear to say these leaders of the Jewish community are engaged in anything improper.”

This is at least the second year that Weiner has steered cash to nonprofits in Brooklyn’s Sephardic Jewish community, whose board members have been longtime supporters.

The three Sephardic groups are not affiliated. Some of their board members come from the same families and all three have officers who have made contributions to Weiner.

“Anthony is a friend of the Sephardic community of Brooklyn,” said Morris Missry, a SAFE Foundation board officer who raised $67,700 from 27 donors for Weiner last summer.

He and his wife have given $9,950 to Weiner’s mayoral and congressional campaigns.

Missry said he was surprised about the Weiner earmark when called by the Daily News. “That’s wonderful,” he said of the $238,000 for SAFE. “We need the money.”

Other SAFE Foundation officers who gave money to Weiner did not return calls or could not be reached for comment.

The Sephardic Angel Fund has been the focus of scrutiny because tax documents revealed that a wealthy board member, Eddie Shamah, received an improper interest-free loan. The group also gave no-interest loans to board members’ relatives.

Shamah, who has given $3,000 to Weiner since 1999, said the tax document was an error and the Angel Fund has since filed an amendment.

A lawyer for the fund confirmed Shamah’s claim that he never received a loan, but said the amendment had not yet been filed.

This issue does not call into question the ethics of “these leaders of the Jewish community,” But it does call into question the ethics of Congressman Weiner.  Personally, if the junk tweeting episode is true, it occurred between adults and unless there is evidence it was done on the public dime, I believe it is an issue between Weiner and his Wife.

This suspicious use of the congressional earmark privilege calls into question his use of public funds. That and his hypocrisy, after all  before he questions others about conflicts of interest, Congressman Weiner should answer questions about his campaign deals/ earmarks that smell a bit rancid?