Oh No, Not Oreos Too! Favorite Cookie Goes Woke 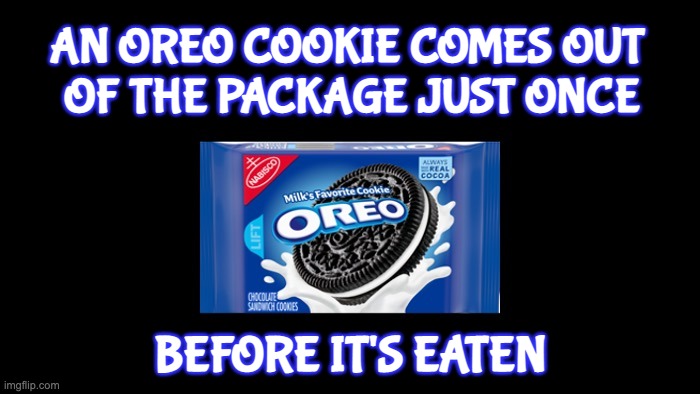 One of the happiest days of my life occurred almost twenty-five years ago, in December 1997, when the most fabulous cookie on this earth (IMHO), the Oreo cookie, replaced lard (pig fat) from its recipe and was given a Kosher certification. I could finally eat the best-tasting cookie dunked in a glass of milk. It didn’t even bother me when in 2013, researchers at Connecticut College released a study reporting Oreos were as addictive as morphine and cocaine. Honestly, it was way too late. I was already hooked. My personal motto became “Hi, My name is Jeffery, and I am an Oreocaholic

The cookie seller’s latest foray into hardcore leftism is a video entitled “The Note,” produced by Alice Wu for Oreo, which they posted on Twitter:

Coming out doesn’t happen just once. It’s a journey that needs love and courage every step of the way. Share our new film 👇 and let someone know you’re their #LifelongAlly. pic.twitter.com/S5ipPxZRON

I don’t have a problem with homosexuality. However, cookies shouldn’t go woke.   No cookie that I have ever seen has made me think of intimacy—gay or straight. Cookies don’t have sex.

“The Note” is the latest result in a multiyear collaboration between the cookie brand and PFLAG National, and is the launching point for its new #LifelongAlly campaign, which includes a $500,000 donation to the advocacy organization. Oreo senior brand manager Olympia Portale says the brand didn’t want to show another coming-out story, but worked with PFLAG, ad agency 360i, and Wu to find an insight for taking the discussion around coming out in a positive, new direction. That insight revolves around the idea that coming out isn’t just a one-and-done experience. “For many people, the only time their parents or family even acknowledge that they’re in this community is in that first moment,” says Portale. “That [subsequent] silence can last years and can be really harmful. So we wanted to show that being an ally, being supportive to family members, isn’t just about saying ‘I love you, and I support you’ in that one moment, but how you show up in an active way, so that individual feels you have their back all the time.”

Coming out? Come on folks we are talking about a cookie, a great one but still just a cookie. The only relationship it has with coming out is when one of the tasty confections is removed from a package.

It really is long past time that woke corporations face some consequences for pushing leftist agendas instead of just selling us cookies, cars, soda pop, and chips. Now excuse me, I have a package of Oreos and a glass of milk. See ya’ll later.