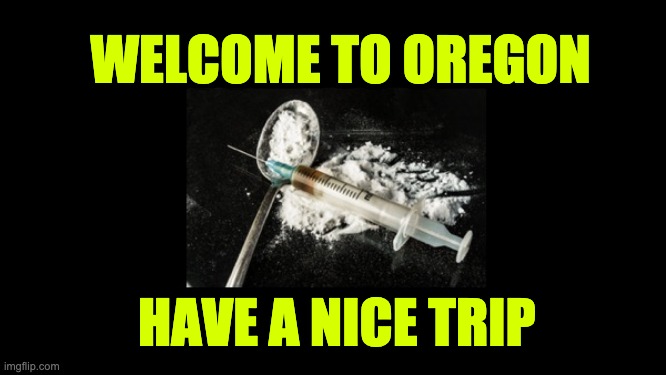 Most of the election night news was dominated by the Presidential race, which is the way it should have been. Getting little attention was the local races, and the down-ballot initiatives people voted on. For example, in my county, we voted on an initiative about funding sewers. In the extremely liberal state of Oregon, citizens had the chance to vote on a measure decriminalizing the possession of small amounts of hard drugs such as heroin, coke, and meth.

A “yes” vote supports making personal non-commercial possession of a controlled substance no more than a Class E violation (max fine of $100 fine) and establishing a drug addiction treatment and recovery program funded in part by the state’s marijuana tax revenue and state prison savings.

According to Oregon Live, the vote was a cause for celebration:

“Today is a huge day of celebration but the work is not over and we have a lot more work to do to win a better system for everybody,” he said.

Supporters believe U.S. drug policy has filled the country’s jails with nonviolent offenders who need treatment instead of incarceration and has disproportionately affected generations of Black people.

Gee, a day of celebration? Did they celebrate by doing lines of coke? Tripping on acid? They should try a few rounds of what they just made legal. But before they give it a shot, someone should remind them of the case of Lenny Bias, the college basketball star who was drafted by the Boston Celtics–the second overall pick in the 1986 NBA draft.  On the day of the draft, Lenny Bias celebrated his future NBA stardom by trying cocaine for the first time in his life. Lenny’s heart didn’t like the coke and stopped working. He was pronounced dead of cardiac arrhythmia at the too-young age of 22. All because he tried coke once.

While I agree somewhat that we shouldn’t fill up our prisons with people who committed non-violent drug crimes, perhaps the solution is getting rid of mandatory sentences. Totally eliminating prison for those offenses may encourage drug use and possibly lead to additional non-drug-related crimes or more cases like Lenny Bias.

Dr. Paul Coelho of Salem Health Hospitals and Clinics disagreed with the measure:

“The framers of ballot measure 110 portray individuals with active addictions as rational actors who will naturally seek out and accept treatment for their condition. But I can assure you as a front-line provider this is simply not true, nor is the levying of a token $100.00 fine a financial disincentive of sufficient magnitude to coax the ambivalent or pre-contemplative person into a life of abstinence or long-term recovery. Unfortunately, removing the threat of incarceration and abandoning the collaboration between law enforcement, the judiciary, probation, and the drug court system will result in a revolving door of drug abuse, treatment refusal, crime, homelessness, and ongoing costly health-related expenditures for hospitalizations due to overdose, infections, and drug-induced psychosis.”

Former Oregon Gov. John Kitzhaber argued the measure would undermine the courts’ role in getting people into drug treatment and would not guarantee much-needed treatment beds.

Over the past few months, the city of Portland, Oregon, has become something of a war zone.  The Portland riots have continued through this past weekend.  Now take those riots and throw some heavy-duty street drugs, such as heroin or cocaine. It will be like throwing gasoline on a fire. Sadly this will spread way beyond Portland. It is the future of the entire state of Oregon.