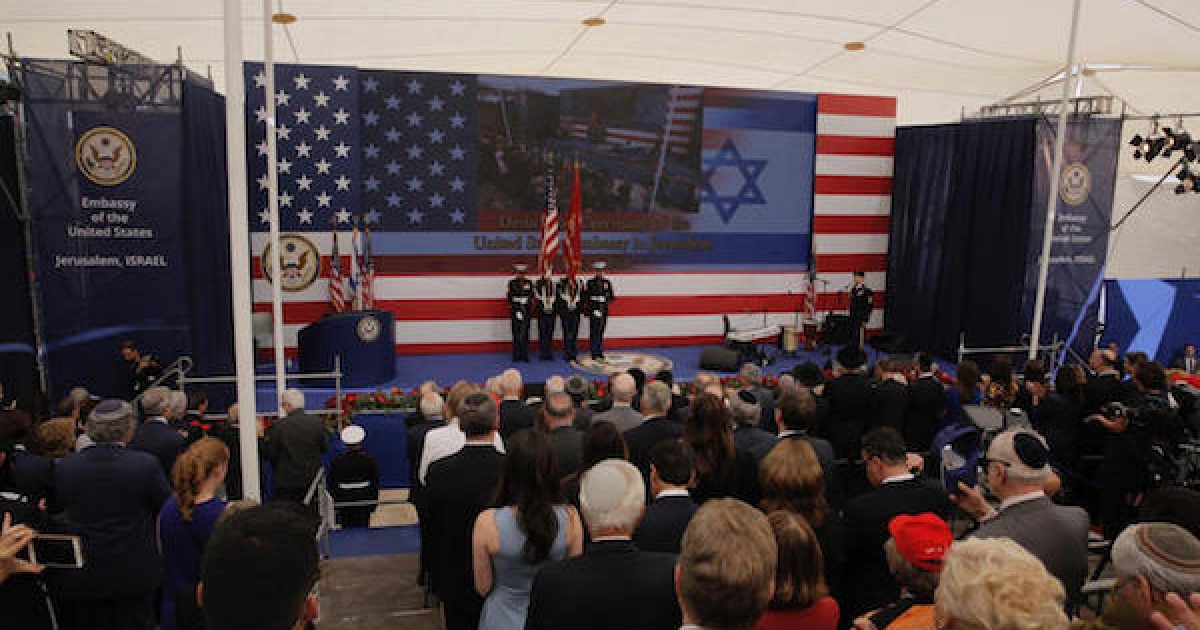 If I forget thee, O Jerusalem, let my right hand forget her cunning. Let my tongue cleave to the roof of my mouth, if I remember thee not; if I set not Jerusalem above my chiefest joy.

Who says the age of miracles is over? Seventy years to the day after Harry Truman ignored the warnings of the State Department and some of America’s European allies to recognize the creation of the first Jewish nation in 2,000 years, we are witness to another miracle. Once again over the objections of some in the State Department and our allies in Europe, a United States President has become the first world leader to move a nation’s embassy to Jerusalem, the capital of the Jewish State.

The U.S. Ambassador to Israel David Friedman acted as the master of ceremonies for the 90-minute ceremony, but the highlights were speeches by presidential advisor Jared Kushner, Israeli Prime Minister Binyamin Netanyahu, and two songs by Israeli singer Hagit Yaso.

Friedman opened the ceremonies with:

“On this exact day 70 years ago, at almost this exact time, David Ben Gurion declared Israel’s independence. Just 11 minutes later, President Harry Truman caused the United States to be the first nation to recognize the reborn State of Israel. He later regretted that he waited so long, 70 years since that memorable event, almost to the minute, the United States finally takes the next step: a step awaited, voted upon, litigated, and prayed for all these years. Today, we open the United States embassy in Jerusalem, Israel,”

One point uttered by most speakers was thanking President Donald Trump for having the courage to open an embassy in Israel’s capital, which was very well deserved. In 1995 Congress passed a law declaring that the U.S. embassy had to move to Jerusalem. But every six-months the President could tell Congress the move was going to be delayed. Sadly, Bill Clinton and George Bush couldn’t generate the courage to move the embassy to Israel’s capital city.  And Obama…well…let’s just say Barack Obama wasn’t a fan of anything Jewish. It took President Trump who cares more about doing the right thing than pleasing the critics, to execute the move.

Most of the Jewish speakers uttered the Shehecheyanu prayer in Hebrew thanking the creator of the universe for allowing them to reach that day, in English:

Blessed are You Lord our God, Ruler of the Universe who has given us life, sustained us, and allowed us to reach this day.

President Trump addressed the crowd of about a thousand via video. He explained that the move should have happened years ago and that he saw the embassy move as the first step toward peace:

“Yet for many years we failed to acknowledge the obvious: the plain reality that Israel’s capital is Jerusalem. On Dec. 6, 2017, at my direction, the United States finally and officially recognized Jerusalem as the true capital of Israel. As I said in December, our greatest hope is for peace. The United States remains fully committed to facilitating a lasting peace agreement, and we continue to support the status quo at Jerusalem’s holy sites, including at the Temple Mount, also known as Haram al-Sharif.

This city and its entire nation is a testament to the unbreakable spirit of the Jewish people. The United States will always be a great friend of Israel and a partner in the cause of freedom and peace.”

“While presidents before him have backed down from their pledge to move the American Embassy once they were in office, this President delivered. Because when President Trump makes a promise, he keeps it,”

“We believe, it is possible for both sides to gain more than they give – so that all people can live in peace – safe from danger, free from fear, and able to pursue their dreams.” and “Jerusalem must remain a city that brings people of all faiths together.”

Kushner reminded viewers that Israel was the only free country in the area.

“Israel proves every day the boundless power of freedom. This land is the only land in the Middle East in which Jews, Muslims, and Christians, and people of all faiths participate and worship freely according to their beliefs. Israel protects women’s rights, freedom of speech, and the right of every individual to reach their God-given potential.”

He got a standing ovation when mentioning President Trump’s big move, the prior week. Praising the U.S.’s withdrawal from the JCPOA calling the agreement “flawed” and “one-sided.”

Sadly, while the celebration was going on, the long-promised violent Hamas protest was also happening. Israeli warnings for the protesters not to rush the border fence (which included dropping flyers) were ignored, and IDF soldiers were forced to protect their country. According to the Palestinian Authority, more than four dozen were killed, and over two thousand were injured, almost as a human sacrifice to Hamas terrorism.

But the terrorist attack did showcase another miracle–well either that or the guy was using crutches to create a media story:

A miracle in Gaza. The man with the crutches suddenly started running pic.twitter.com/53l5bb3zV1

Creating their own narrative, the U.S. mainstream media blamed the violence on the embassy move even though Hamas announced the weeks of violent protests tying into “Nabka Day” what the Palestinians call the catastrophe of the creation of the state of Israel, long before the United States announced the date of the embassy move.

Kushner mentioned the protests during his address, “those provoking violence are part of the problem and not part of the solution.”

An elated Prime Minister Netanyahu began with praise for the United States,

“We have no better friends in the world. You stand for Israel, and you stand for Jerusalem. Thank you. Your presence here today is a testament to the importance of this occasion, not only for the Trump administration but in a very personal way for you. For you, each of you, for the pursuit of peace, and for President Trump himself. Thank you.”

He told the story of growing up near where the new embassy was located, but then it was empty land.  His mother would warn not to go near that area.

“This was near the border. It was exposed to sniper fire. That was then. This is now, today. Today, the embassy of the most powerful nation on earth, our greatest ally, the United States of America, today its embassy opened here.”

Netanyahu spoke of the history of Jerusalem leading up to that historic day during the Six-Day-War when an Israeli soldier spoke those three beautiful Hebrew words, “Har ha’bayit be’yadeinu,” “The Temple Mount is in our hands,” words that lifted the spirit of the entire nation and Jews around the world.

As he wrapped up, he quoted the Prophet Zachariah

“So said the Lord, ‘I will return to Zion, and I will dwell in the midst of Jerusalem. And Jerusalem shall be called the City of Truth.’ May the opening of this embassy in this city spread the truth far and wide, and may the truth advance a lasting peace between Israel and all our neighbors.

He finished by asking for heavenly blessings for Israel, and the US, and with the Shehecheyanu prayer.

Of the 86 national diplomatic corps who received an invitation to the embassy opening, 40 attended including the ambassadors from Hungary, Czech Republic, Austria, and Romania. Among the countries who said no were Russia, Germany, Ireland, Malta, Mexico, Portugal, Australia, Poland, and Sweden.

Four U.S. Senators Ted Cruz (R-TX), Dean Heller (R-NV), Lindsey Graham (R-SC), and Mike Lee (R-UT) attended the ceremony along with ten Republican U.S. Representatives — but not one Democratic member of Congress joined the U.S. delegation for the embassy event. Per Senator Graham no one, Republican or Democrat, had been specially invited to the ceremony,  they just chose to come, or not. And he noted that only Republicans decided to attend. Another surprise when one considers American Jews blind loyalty to the Democratic Party.

Today’s ceremony was not the end, it was the beginning of a new period in Eretz Yisroel. Whether or not it brings peace as the President contends won’t be known for a very long time. But with enough prayer, the words of the song, Od Yavo Shalom Aleinu, Od Yavo Saalam Aleinu performed by Hagit Yaso during the ceremony will indeed come true:

The entire ceremony is featured on the video below: