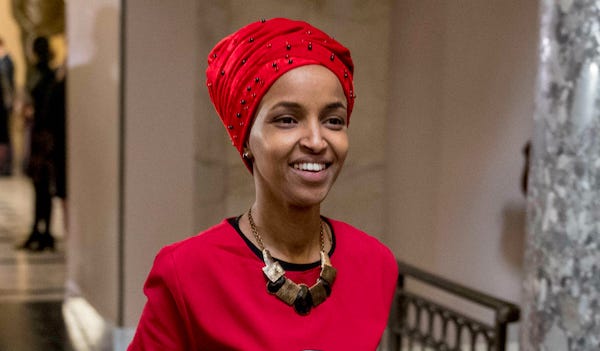 How is this not treason? Omar suggests Iran attack Trump

Trump needs to immediately divest from his businesses and comply with the emoluments clause. Iran could threaten Trump hotels *worldwide* and he could provoke war over the loss of revenue from skittish guests.

His business interests should not be driving military decisions.

I guess it isn’t technically treason because she is talking hypothetically and not specifically giving advice.

In trying to make a point she seemingly laid out a blueprint for Iran didn’t she?

How are his business interests driving military decisions currently?

Is she suggesting that he should sell off everything because it could be attacked?

This is just Omar being Omar — stirring the pot instead of focusing on the task at hand.

What a nut job.

The inspiringly patriotic Rep. Ilhan Omar (D-Tehran, no, check that, I’m hearing she’s from Minnesota) tweeted Monday offering some unsolicited military advice to the Islamic Republic of Iran: “Trump needs to immediately divest from his businesses and comply with the emoluments clause. Iran could threaten Trump hotels *worldwide* and he could provoke war over the loss of revenue from skittish guests. His business interests should not be driving military decisions.” She also tweeted a video in which the late comedian George Carlin asserts that the U.S. is “not very good at anything” besides war. And so once again we have to ask the by-now-familiar question: Is Ilhan Omar a traitor who hates America?

Omar’s warning that Trump’s “business interests should not be driving military decisions” makes no sense, because clearly the fact that Trump owns hotels that Iran could target didn’t stop him from going after Qasem Soleimani. But as far as Omar and her ideological allies are concerned, it doesn’t matter how much they have to twist their logic into pretzels to get Trump, as long as they make the president look bad. That imperative has now driven Omar even to give a military suggestion to a hostile foreign power. The mullahs and their henchmen haven’t said anything about targeting Trump hotels, so here is a United States congresswoman to give them a marvelous new idea about how they could murder Americans and others, and further menace the United States.

The definition of treason is giving aid and comfort to the enemy. The leaders of the Islamic Republic of Iran order their people to chant “Death to America” in mosques every Friday, and repeatedly vow that they will ultimately destroy the United States of America and the state of Israel. They were doing this before Soleimani was killed, and they’re doing it now. How is giving them a suggestion about how they could target the United States, whether or not they have or would have thought of it themselves, not giving aid and comfort to the enemy, and hence treason?

When she took the oath of office to become a member of the United States House of Representatives, she swore to “support and defend the Constitution of the United States against all enemies, foreign and domestic,” as well as to “bear true faith and allegiance to the same.” Inviting, out of a hysterical hostility to the president of the United States, a nation that regularly chants “Death to America” to strike American-owned businesses – is that supporting and defending the nation against foreign enemies? Omar might well split hairs and assert that she suggested no attack on the Constitution, which is what she specifically swore to defend, but clearly the oath uses “Constitution” as a metonymy for the nation as a whole.

Abetting this impression is the fact that Omar on the same day demonstrated her hostility to the country that she has sworn to protect and defend. She tweeted the Carlin video with the comment: “It’s no laughing matter,” just so we’re clear that she didn’t mean any joke. She is seriously offering the claim that the country to which she has sworn allegiance and which she represents in its Legislative Branch is just a war-mongering blunderer that is not good at anything besides being militarily aggressive. Meanwhile, she invites the military aggression of one of America’s foremost enemies. If the Islamic Republic of Iran turns out to be not good at much of anything besides war against the United States, would Ilhan Omar have any problem with that?

Despite all this and more, it is, of course, inconceivable that any treason charges will ever be brought against Ilhan Omar. Her hatred of America plays well among the American Leftists who share it, and the Democratic Party establishment would condemn any such charges as a partisan attack and the attacker as a racist right-wing white supremacist and enemy of all that is good. Meanwhile, the past week has given us abundant examples of how the Democrats hate Trump with such burning intensity that they are willing to lionize and mourn a man who was responsible for the deaths of at least 600 Americans, as well as for a great deal more terrorist activity. So what’s a little treason among America-hating friends?

This woman is on the House Foreign Relations committee–-WHY?

She did earn a major dishonor the same day she tweeted about Iran. She was named anti-Semite of the year.

She’ll soon be giving jihadis, that are already here, a list of targets to attack. She’s already been accused of passing info to Iran.

Ilhan Omar is a sharia loving ____ (starts with a “B”) who does nothing but undercut everything that has ever made America great. She even celebrated Memorial Day with CAIR, an organization affiliated with Hamas.

This congresswoman needs to start focusing on America First and let the jihadis plan their own attacks.

There is a reason she is in America and not working with the terrorists she loves and admires.

Silly Omar, America has changed you.

Maybe Iran should send a terrorist to Ilhan Omar’s house.

It’s best they shut her up before she starts telling us how to beat them.

Oh wait, that will never happen…

And no one in America would listen to her anyway…