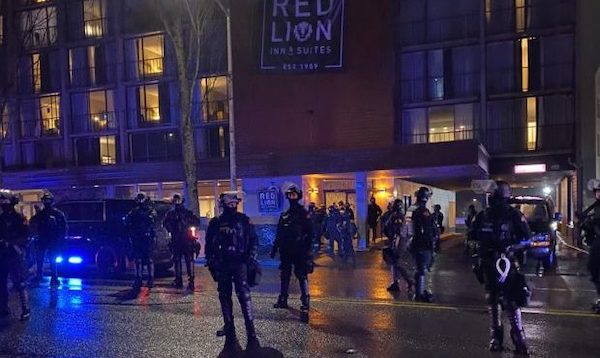 At around 11 a.m. on Sunday, two floors of the Red Lion Motel in downtown Olympia, Washington, were forcibly taken over by a mob armed with knives, hatchets, gas masks, and batons. Calling themselves “homeless activists,” the group consisted of an Antifa-linked anarchist group called Oly Housing Now. They stormed the motel, demanding that homeless people be allowed to winter inside the building. For free, of course.

Police received multiple 911 calls from employees at the Red Lion around 11 a.m. Sunday saying numerous individuals were entering their lobby armed with batons, knives and axes. One employee was assaulted as they tried to close the doors and the rest fled to the basement, according to an Olympia police spokesperson.

When police arrived, there were about 45 members of the group inside and outside of the hotel. The group had occupied the 4th and 5th floors and were placing black tarps on the windows, according to police.

Police must have had an inkling of what was coming as the Antifa-linked group advertised that something was up (but didn’t mention the Red Lion).

Join us for a Housing Justice Rally this Sunday at 11am at Sylvester Park!

Stand as a community in support of housing for our houseless neighbors! pic.twitter.com/dzqtevfxdA

For reference, the activists put out a press release saying they were illegally occupying the hotel. They are accused of having weapons inside — and assaulting staff members of the hotel. The staff had to flee to the basement.

The group calling itself “Oly Housing Now” were not your average “advocates for the homeless.” It’s terrorism, an open attempt to intimidate and terrorize. Olympia Police issued this statement on the Olympia occupation:

“The Olympia Police Department (OPD) is in the process of clearing the Downtown Olympia Red Lion Hotel after it was forcibly occupied by a group identified as Oly Housing Now, a homeless activist group. Employees of the hotel have been safely escorted out of the occupied hotel after sheltering in the basement through the afternoon and part of the evening.

“At about 11 a.m. today, people inside the Red Lion began calling 911 to report a group was attempting to forcibly take over the hotel. OPD received reports that the employees felt under threat from the group, and that an employee was allegedly assaulted.

“Employees reported that some members of the activist group inside the hotel were armed with items such as hatchets, batons, knives and had gasmasks, helmets and goggles apparently in preparation for a confrontation. OPD estimated about 45 members of the group inside and outside of the hotel.

“At the time of the occupation, approximately 40 rooms in the hotel were booked with guests who were bystanders to the incident. Those guests sheltered in their rooms during the occupation, and OPD is providing a safe place for them as the hotel is cleared.

“Before the occupation, the activist group had earlier reserved 17 rooms, which were occupied by currently unhoused individuals as the occupation occurred. As OPD clears the hotel, the City’s Crisis Response Unit is connecting those unhoused people to services. They will not be allowed to remain at the hotel.

“OPD does anticipate there will be some arrests associated with the occupation. The investigation is ongoing. OPD is being supported in their efforts to reclaim the hotel by the Thurston County Sherriff’s Department and the Washington State Patrol.

“Making sure our unhoused residents have access to safe and affordable housing has been Olympia’s priority for more than a decade,” said Mayor Cheryl Selby. “Olympia has led on responding to homelessness, on coordinating shelter and other basic needs. The tactics used today by Oly Housing Now are unproductive and won’t make the mission more attainable.

The agitators keep pushing the Olympia cops. They’re actively trying to agitate a conflict so they can pretend the police started it. pic.twitter.com/kMde4dzuJj

I thought an agitator was the part of a washing machine that stirs the water and clothes. This group is associated with Antifa; they are domestic terrorists (unless you are a Democrat who claims they don’t exist like Rep. Jerrold Nadler, whose memory was destroyed when he started to wear his pants and belt so high it cut off the oxygen supply to his head).

Agitator grabbed my phone for filming at Olympia occupation. pic.twitter.com/H5RIgeia0q

They are now chanting to Olympia cops to “choke and die.” pic.twitter.com/EnMh9esHbu

The agitators — including some I recognize from Seattle — tore the police line down as a way to antagonize a conflict with Olympia Police. Then when police move, agitators play victim. pic.twitter.com/4cpFA2s28M

Agitator wishes spectator die from COVID here in Olympia outside the hotel that was being occupied by Antifa and other agitators. pic.twitter.com/qtoR47Jf5E

The Hotel invasion was supported by a related group Tacoma Housing Now, which took over a Travelodge in Fife, Washington, a month earlier on Christmas eve. They wanted the money from COVID relief funds.

The Travelodge was almost entirely empty when we moved in, like all hotels during the pandemic. We’re not costing the owner business; we’re bringing him business by insisting the City and County pay him with CARES money.

Whether they are connected or not (it sure seems they are) it will be a very long time before I visit Washington State.