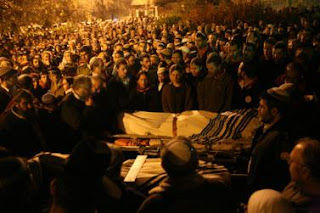 David Rubin and Achikam Amichai were murdered last month while hiking in the Telem Stream region near Hevron. They were ambushed by four terrorists, returned fire and killed two of them.

The two surviving murderers are Ali a-Hamid Rajeb Dandis, a clerk at Hevron’s Islamic Court and member of Fatah’s intelligence wing, and Amr Bader a-Halim Taha, a resident of the Abu-Sneineh hills opposite Hevron’s Jewish community and member of the Fatah-controlled PA security forces. The two took refuge shortly after the murders among their fellow PA security men in an apparently successful attempt to avoid arrest by the IDF.

Tthe PA did not even inform Israel that the two had taken refuge at a PA facility until after the Shabak (General Security Service) filed a request that the weapons of Rubin, Amichai and their killers be handed over. At that point, assuming that Israel knew the whereabouts of the murderers anyway, the PA told the Shabak that it had the men in custody.

According to Israel’s TV Channel 2, the Olmert government has agreed to let the murderers remain in PA custody, effectively confined to their place of employment (for some that is cruel and unusual punishment). The IDF was all ready to snatch up the two murders but Mr. Comb-over refused to grant authorization Once again this Neville Chamberlain wannabe is appeasing the terrorists. Once again he is teaching them that their horrible methods work. Its one thing being incompetent, which Olmert is, but it is even worse when a leader is both incompetent and an appeaser, that is a deadly combination…that is Ehud Olmert. Report: Olmert Gov’t Prevents Capture of Hikers’ Killers