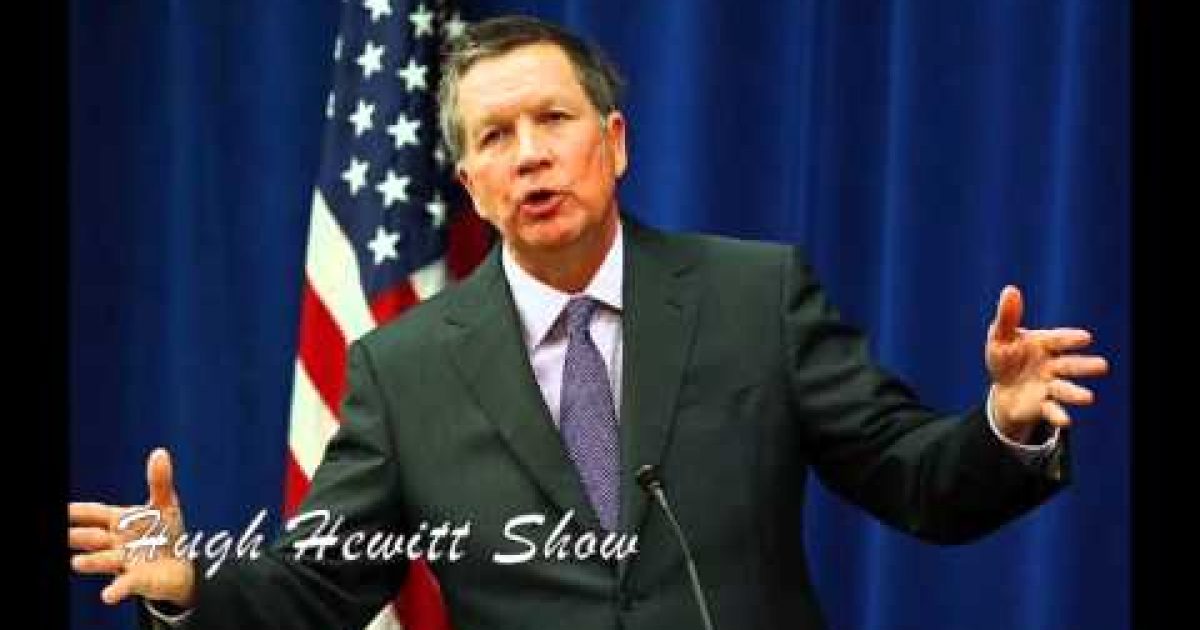 Ohio Gov. John Kasich is rumored to be preparing for a 2016 POTUS run. One issue where he disagrees with the GOP base (and agrees with almost declared candidate Jeb Bush) is Common Core. He was asked about it on Tuesday night on the Hugh Hewitt Show.

Hewitt: Now Governor, earlier today, because of Jeb Bush’s announcement. I started looking into Common Core. And I saw you sat down with the Columbus Dispatch a few months ago, or maybe it was even a year ago, and said look, I’m not for Common Core, I’m not against Common Core, I’m for kids learning. Is this your effort to take the education issue and put it along with the balanced budget issue at the center of the American agenda?

Kasich: No, no, no. Look, we’ve got so many education reform proposals, Hugh, we could do two hours on all of them, including the 3rd grade reading guarantee, to stop social promotion, a different pathway for kids who are likely to drop out to be able to get an education, in other words, turning our education system from an agrarian model into a 21st Century model. But here’s what I was saying about Common Core. First of all, it was the governors that came up with this idea. In my state, we designed the curriculum to meet the higher standards which we need in America at the school board level. I have nothing to do with their curriculum. Washington has nothing to do with their curriculum. It’s the school board with parental advisors who designed the curriculum to meet the higher standards. And that’s, I said, you know, without Washington or Columbus being involved, I’m for higher standards, and I’m for local schools being able to figure out how to get them achieved. Now there’s a test called the Park Test. I’m not committed to that test. If that test doesn’t make any sense, we’ll throw the God-darned test out. And frankly, there’s too much testing in our schools right now. But until somebody shows me that this Common Core, which involves higher standards so our kids will do better, I don’t know what’s wrong with it except, you know, I mean, people say what’s wrong with it. I’ve never heard anything that was a legitimate opposition to it, Hugh.

Hewitt: So when you go out and you appear in Arizona on the balanced budget, or you’re out talking to community activists about Community Connectors,…

Hewitt: It doesn’t come up?

Kasich: I haven’t had it come up, but I’m, you know, when I go out there, I’m out there to talk about balanced budget. But I’m not afraid of any issue. I mean, you know, what, are you kidding? You know me. And look, you know, I’ve been very open with everything that I’ve done out here, and I don’t know whether you’re aware of this or not, but you know, I won 86 out of 88 counties. I won your home county, and I won Mahoning County.

Hewitt: I am aware of that.

Kasich: Yeah, people who are self-identified conservatives in, when I ran the first time, it was 80% that voted for me. This time, it was 88%. So I pay no attention to the hype, and I try to look beneath that to see what is the reality, what is the real story about these controversial issues? So I’m free to do it. You know, I don’t need anything else, Hugh. I’m just here to try to be a good public servant, to try to lift people in each and every way. But look, let’s just hit that thing head on.