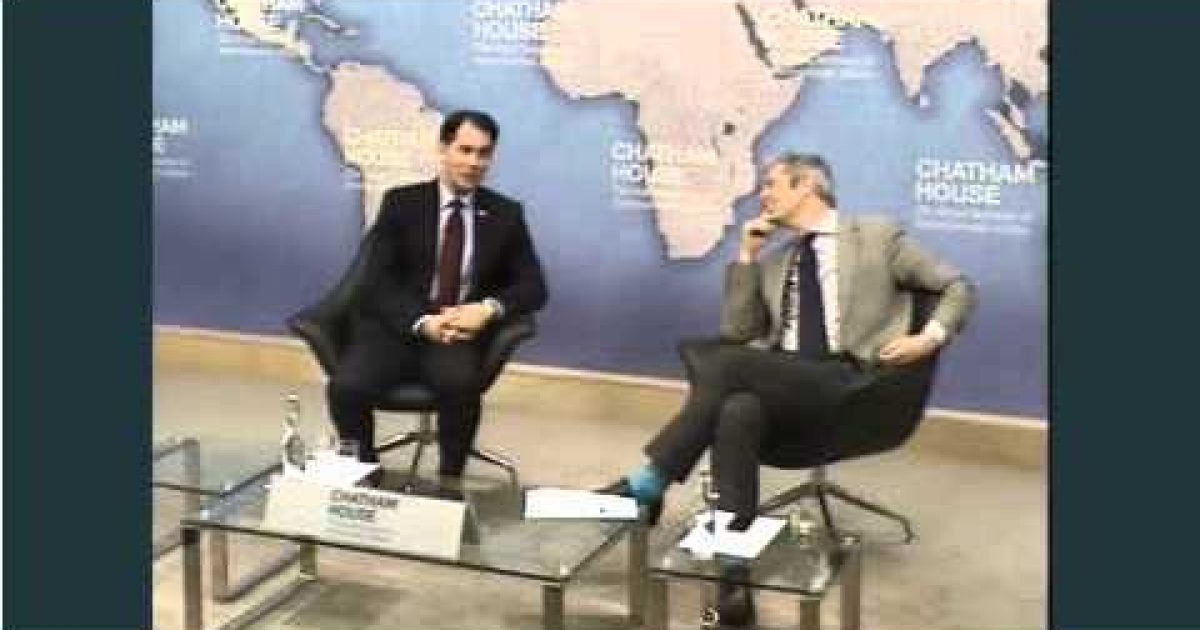 The stupid questions are beginning already.  Supposedly on a trade mission to Great Britain (but really to pick up some foreign affairs bone fides) Wisconsin Gov. and possible GOP candidate for president Scott Walker, was speaking at Chatham House, the Royal Institute of International Affairs, is an independent policy institute based in London was asked by a British moderator if he feels comfortable with the idea of evolution. He chose not to respond, “I’m going to punt on that one as well, that’s a question a politician shouldn’t be involved in one.”

I know how I feel about the question, but I am not sure how I feel about the answer. I happen to believe that there is nothing contradictory between the creation of the world as described in B’reisheet (what Jews call Genesis) and the theory of evolution (that argument is below the video).

If he was going to punt, it would have been better if he was stronger with his objection. Something like “That it a ridiculous question and I am not going to answer it because it has nothing to do with my job as governor and if I seek higher office it will have nothing to do with that job either.”

Walker’s polite response just seems as if he was embarrassed at his answer.

As far as the “intelligent design” vs “evolution ” issue, I happen to believe that for the most part both sides are wrong.

The “science side” believes that the creation of the world happened exactly the way its described in the science books with no divine interference. There are those on the other extreme who are just as bad. They reject science out of hand because it seemingly does not agree with the biblical version of Creation. But IMHO they do not trust that God could create the “natural laws” that brought the universe to the point it is today. Or as I like to put it in the story of evolution it was God pushing the buttons.

The real problem with both sides is neither looks at the other side with an open mind. Because if they did they would realize that there is very little difference between science and the traditional biblical creation story. Allow me to put it a different way, “Hey crazies on both sides, you guys are saying the same thing”

The Torah was written in a language that could be understood 3,500 years ago as well as today. Look how similar the stories are and both the Torah and Science have everything happening in the same order.

Science: Before the big bang the universe was totally empty
Torah: Now the Earth was astonishingly empty, and darkness was on the face of the deep, and the spirit of God was hovering over the face of the water.

Science: Out of a tiny singularity there was an explosion of light and matter
Torah: There is no ancient Hebrew work for singularity, so it starts with, God said, “Let there be light,” and there was light.

Science: Gravity cause the matter started clumping together
Torah: God separated between the light and between the darkness

Science: In the very beginning of earth’s history it was a giant, red hot boiling sea of molten rock – a magma ocean. When it began to cool land formed
Torah : And God said, “Let the water that is beneath the heavens gather into one place, and let the dry land appear,” and it was so.

Science: Other clumps of matter collected and formed Stars and Planets and other celestial objects.
Torah: And God said, “Let there be luminaries in the expanse of the heavens, to separate between the day and between the night, and they shall be for signs and for appointed seasons and for days and years.

At the above point we are in the midst of the biblical fourth day. Now I would like to point out to my friends on the Religious fundamentalist side that the Torah says “separate between the day and between the night, and they shall be for signs and for appointed seasons and for days and years.” The Torah is saying that until this time there was no “earthly way to separate day night and years.

It’s as if God is telling us not to be so freaking literal. Days one to three were “God Days” they could have been 2 hours long, 24 hours long, or 24 trillion hours long. Its right there in ink and parchment. Now lets get to this “evolution thing”

Science: We developed from one celled animals in the ocean which became sea animals, eventually those animals crawled out on land , evolved into other things such as dinosaurs and other animals including Mammals. The dinosaurs became birds and through billions of years of evolution the mammals became great apes then Homo Erectus and we end up with Kanye West and Kim Kardashian (which may mean we are regressing).
Torah: Let the waters swarm a swarming of living creatures, and let fowl fly over the earth, across the expanse of the heavens. And God created the great sea monsters (dinosaurs?), and every living creature that crawls, with which the waters swarmed. (The next day we get Mammals-which is in the same order that science claims also). Let the earth bring forth living creatures according to their kind, cattle and creeping things and the beasts of the earth according to their kind [finally after all that is done God gets around to Humans].

Folks, the biblical story of creation is simply the scientific version translated into words that a bunch of ex-slaves and a former Egyptian Prince whose with a speech impediment could understand.

That in itself is proof of God’s existence, he wrote a creation story that was relevant to 603 thousand wanderers three and a half millennium ago can and is just as relevant to the “science” generation of today. The religious refusnicks just have to trust that God knows physics better than Einstein, and the scientific fundamentalists  just have to have an open mind when they look at biblical text.

In the end science is knowledge obtained by observation and experiment. Faith comes from belief in a supreme being that cannot be proven true or false. I believe that the theories of the Earth’s creation described by the scientists are basically correct. But my faith is just as strong that it was a God  “pushing the buttons” to make that science happen.