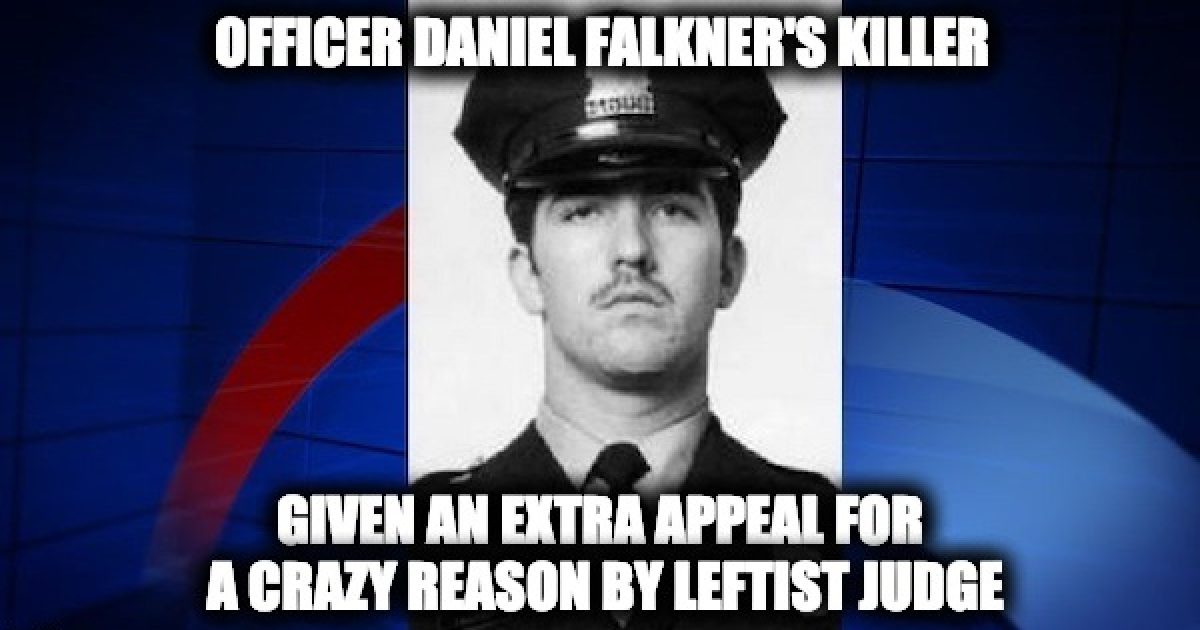 Cop killer Mumia Abu-Jamal was first convicted of killing Philadelphia police officer Daniel Faulkner thirty-seven years ago during a traffic stop in 1981. When backup officers arrived at the site of the murder, they found Officer Faulkner mortally wounded and Abu-Jamal with the murder weapon in hand, laying several feet away.

On Thursday 12/27 leftist Judge Leon Tucker ruled that former Supreme Court Justice Ronald Castille should have recused himself before a 2012 ruling on the appeal of cop-killer Mumia Abu-Jamal. Thus he granted the cop-killer a new appeal. Tucker’s silly reason for the Justice recusing himself was that when he was a prosecutor, Justice Castille said bad things about cop killers so there is a chance he might have been biased.

Mumia Abu-Jamal was sentenced to death for fatally shooting the officer Faulkner and spent three decades on death row before his death sentence was overturned because of flawed jury instructions.

The U.S. Supreme Court refused to hear the cop-killers case in 1999, and in 2001 Judge William H. Yohn, Jr. of the United States District Court for the Eastern District of Pennsylvania upheld the conviction, saying that Abu-Jamal did not have the right to a new trial, but he overturned the death sentence. So after the 2012 Pennsylvania Supreme Court ruling, it was thought that his appeals were done with.  But thanks to Judge Tucker’s decision the cop killer gets a few more attempts to change history,

“I’m absolutely outraged with Leon Tucker. Tucker has no merit on this judgment. [Castille] had nothing to say about Mumia Abu-Jamal, he had no prejudice, This is going to open the door for so many murderers to be able to do this and appeal this.”

(…)”Mumia Abu-Jamal shot my husband between the eyes, he executed my husband,” Faulker said. “I’m never going to let this go. All over the country, they’re reducing sentences on murderers, they’re allowing them out of prison, and it’s wrong. It’s so wrong.”

(…) “To Judge Leon Tucker: I hope you can sleep at night with the decision you made, because you know it was not the right one,”

See video of her interview below:

Abu-Jamal, a 1996 book “Live from Death Row,” has a favorite of liberals because of his claims of racial bias in the case. During his original trial, the jury was racially mixed, with 2 blacks and 10 whites. They voted unanimously that he was guilty. But during a 2001 federal appeal, his defense counsel told the Third Circuit Court that Abu-Jamal did not get a fair trial because the jury was racially biased, misinformed, and the judge was a racist.

Judge Tucker’s ruling was that state Supreme Court Justice Ronald Castille should have recused himself because as a prosecutor he said he didn’t like cop killers.  Did he expect Castille to get on his hands and knees and express his undying love for cop killers?  Anybody who says nice things about cop killers is either a relative of the murderer or an idiot.

I would imagine that during his 15 years as Philidelphia’s attorney general he expressed he didn’t like other kinds of killers also.   Does that mean that Tucker believes that every single murder case the Penn. Supreme Court ruled on while Castille was on the court should be overturned? What if Justice Castille said he didn’t like rapists and child molesters when he was tossing them in jail also? Do those supreme court cases get an appeal?

Tucker was a private attorney for from 1979-2005 did he represent people who committed a crime? If he represented accused criminals, did he express nasty things about the attorney generals or the laws in Pennsylvania? If so, shouldn’t he recuse himself on criminal appeals?

Maureen Faulker is 100% correct, and Judge Leon Tucker should be ashamed of himself,  Watch the video of her Sunday interview below:
Officer Daniel Faulkner