The Most Biting Satire Of American Politics EVER 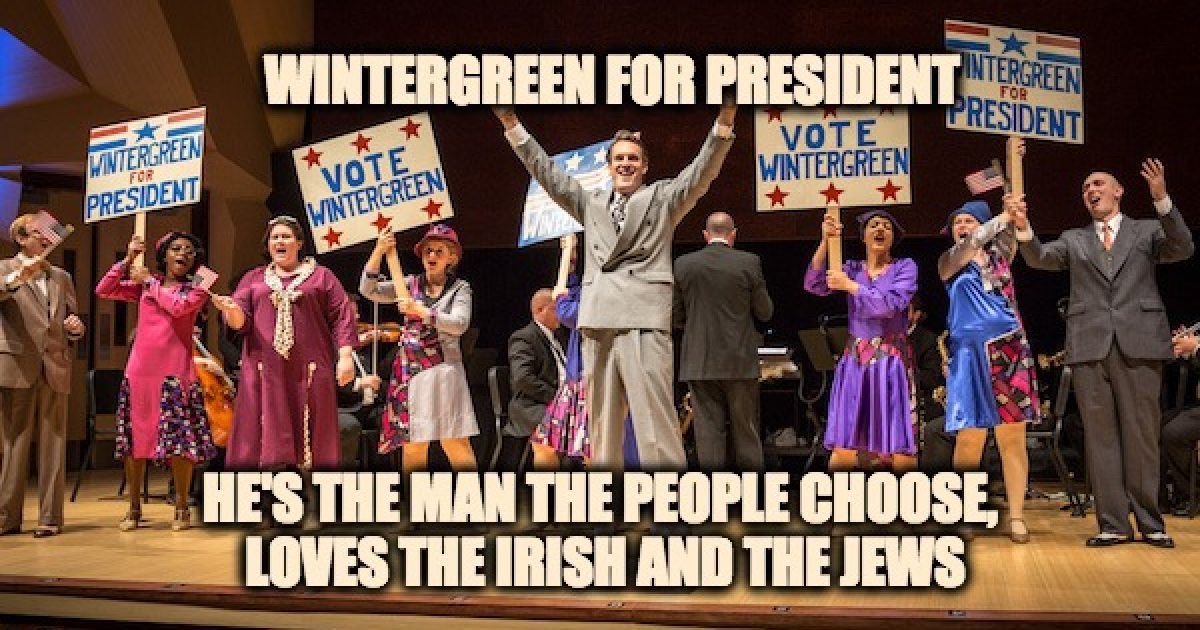 Eighty-six years ago today, on December 26th,1931 the most biting political satire ever written opened at the Music Box Theater on Broadway. Called Of Thee I Sing was the first successful American musical with a consistently satiric tone.  Still relevant eighty-six years after it debuted, the play lampoons identity politics lampoons a political system too tied up in personalities and silly little issues to fix the country’s economy, and how a completely, gullible American people can be controlled at the hands of a good presidential media spin (sound familiar?).

Despite the fact that Of Thee I Sing first appeared on Broadway over eight decades ago, it speaks to politics today and is long overdue for a Broadway revival. 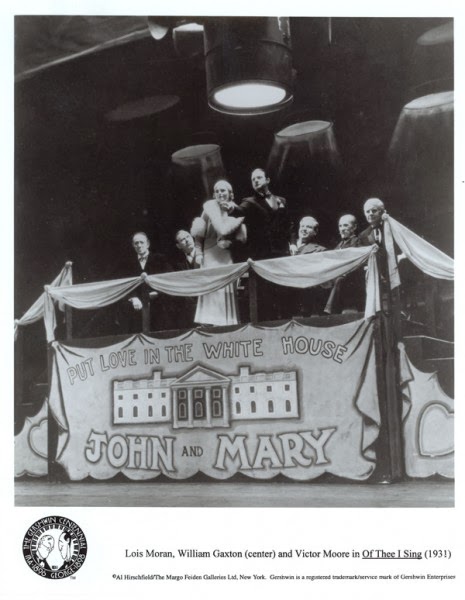 Written at the beginning of the Great Depression, Of Thee I Sing was so satirical, the writers and cast of the play and were unsure of what the public’s reception would be, prompting one of the writers of the book, George S. Kaufman, to quip “Satire is what closes on Saturday night.” Ah but it didn’t. In fact, Of Thee I Sing was the first musical to win the Pulitzer Prize.

George and Ira Gershwin wrote music and lyrics. George Gershwin was perhaps America’s greatest composer, writing everything from musicals, to opera, to classical music and ballet. Ira Gershwin is one of the American musical’s greatest lyricists, who wrote for both stage and screen (including the original A Star is Born).

The play tells the story of presidential candidate John P. Wintergreen,” he’s the man the people choose, loves the Irish and the Jews (song below)”

For Vice President the choice is Alexander Throttlebottom, a man best known for gaffes (sound familiar) and who throughout the play gets thrown out of important meetings because, despite the fact he is vice president, no one knows who he is.

Who Is The Lucky Girl To Be?

As happens with most campaigns, the candidate throws a wrench into the plans to marry the contest winner. You see right after Miss Deveraux is announced as the winner, candidate John P. Wintergreen stops the pageant because he has fallen in love with the all-American Mary Turner whose major qualification is… well:

After hearing such a “heartfelt” announcement the all the voters exclaim (and sing) “Love is Sweeping The Country”  and of course Wintergreen and his Mary win the election. But immediately after the inauguration/wedding, Ms. Deveraux shows up to tell her story of winning the contest and being jilted by the new President because she is “Jilted, Jilted, I’m a flower that’s wilted”

The Supreme Court is called in to decide between corn muffins and justice. They march on to the stage singing: “We’re the one, two, three, four, five, six, seven, eight, nine Supreme Court Judges.
We have powers that are positively regal; Only we can take a law and make it legal.”

After the court, the audience meets the least sympathetic character in the play, the French Ambassador. Even back then (as Al Bundy once said) everyone hated the French. The Ambassador escalates the Diana Deveraux scandal, bursting into the White House demanding retribution for the affront to France. It seems that the sultry Deveraux is “the illegitimate daughter of an illegitimate son of an illegitimate nephew of Napoleon.”

France is not happy, so to placate the French, the political operatives decide to have the President impeached. But just as the Senate is going through its roll call to convict the President, in bursts the First Lady, Mary Turner who announces she’s expecting. Since no expecting President has ever been impeached the impeachment is called off (she ends up with twins–because it was the politically expedient thing to do).

Below is the vocals for the stinging Senate impeachment scene:

Of Thee I Sing is a special play because it really connected with the mood of America during the first part of the depression. That mood is similar to today, a feeling that much of our government is run by a bunch of well-meaning fools, who get tied up in their own underwear trying to get anything done. Over and above the great music, comedy and biting satire, the element that worked best was a sense of optimism; a feeling that however bad things got eventually things would turn out fine. That optimism is uniquely American. 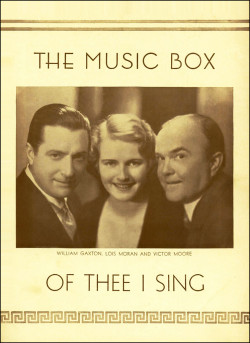 Of Thee I Sing is merciless in the way it attacks all American institutions, the nine members of the Supreme Court care more about politics than justice (just like today), the Senators care more about petty local politics than doing their jobs, the political operatives don’t give a rat’s ass about what the country needs. They only care about public opinion and maintaining power, and identity politics are more important than issues.

Oh…and the play ends with the Supreme Court deciding the gender of the presidental babies.

In the end, everyone is happy, the President has his Mary (and corn muffins).