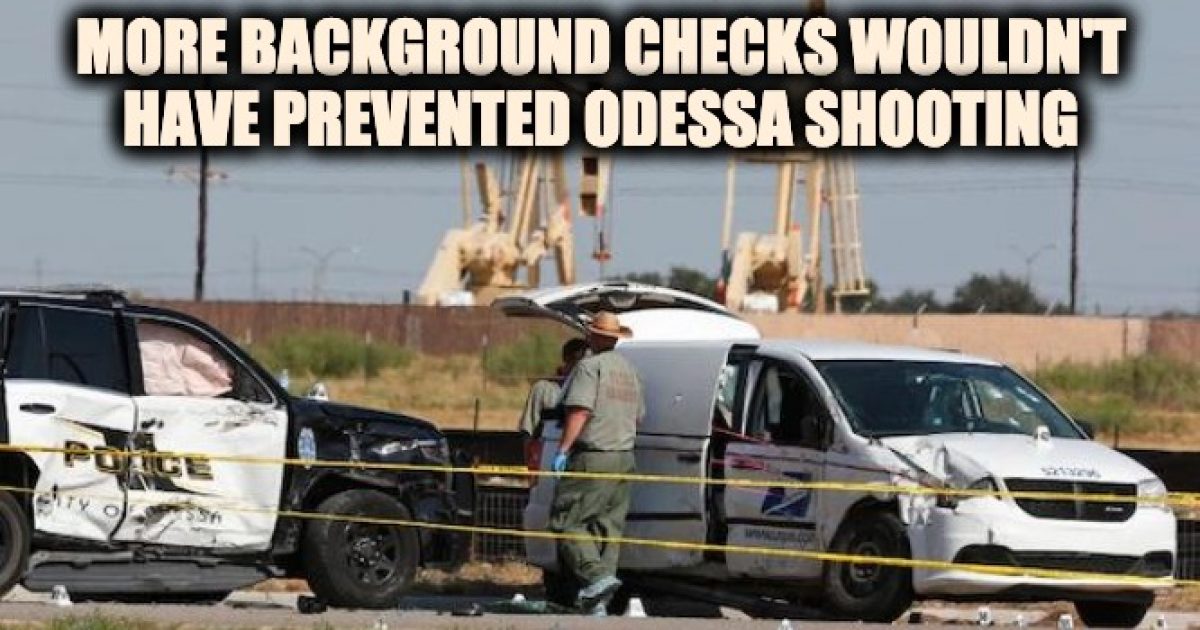 The Odessa Shooting was horrible. One man, possibly angry about losing his job went on a mad shooting spree killing seven people and injuring almost twenty-three others.  While the bodies of the victims were still warm, leftists and other democrats were screaming for “universal” background checks.  But additional background checks would not have prevented the deaths in Odessa, because the monster who killed in Odessa had a criminal record, failed a background check and still ended up with the weapon that would take seven lives. In other words, by definition, criminals don’t follow laws, including gun laws.

In a tweet, Monday, Texas Governor Abbott said wrote that the gunman not only had “a criminal history…he also previously failed a gun purchase background check in Texas…& he didn’t go thru a background check for the gun he used in Odessa. We must keep guns out of criminals’ hands.”

Not only did the Odessa gunman have a criminal history…

…& he didn’t go thru a background check for the gun he used in Odessa.

We must keep guns out of criminals’ hands. https://t.co/vgrqcHtBtF

Words alone are inadequate. Words must be met with action,” Governor Abbott said. “We must broaden our efforts to address (Odessa) and we must do so quickly. We need solutions that will keep guns out of the hands of criminals like the killer in Odessa while also ensuring that we safeguard rights.”

How he DID eventually get his hands a firearm is still uncertain.  What is known is The shooting spree began when Texas troopers pulled over the murderer for a traffic violation, and he shot and wounded one of the troopers with a rifle. He then began driving around Midland and Odessa, randomly shooting at people. At some point he ditched his car, fatally shot a 29-year-old U.S. Postal Service letter carrier and continued shooting people from the postal van.

Democratic Candidates for president are promising different ways of removing guns from the hands of legal gun owners. For example, “Beto” O’Rourke called for a gun licensing which would create a national database and a mandatory buyback program for so-called “assault weapons.”  He also advocated a “voluntary” buyback for handguns.  Over the weekend, however, he told us exactly which guns he would require us all to sell to the federal government.

The House Democratic caucus in want’s to close loopholes that under federal law, allow certain people to sell firearms without requiring background checks, like for example a father selling, or giving a gun to a child,

However, as usual  Beto, the house Democrats, other candidates, and politicians are demanding, action without explaining how their plans will prevent more shootings. The Odessa monster failed a background check and somehow got a gun anyway. Yes, he used an AK-type weapon, but he had it illegally, so any “ban” wouldn’t have stopped him.

It seems to me that instead of expanding background check or confiscating “assault weapons,” the way to prevent shootings like Odessa is to enforce the law and ensure that the people who fail the background checks cant get a weapon.