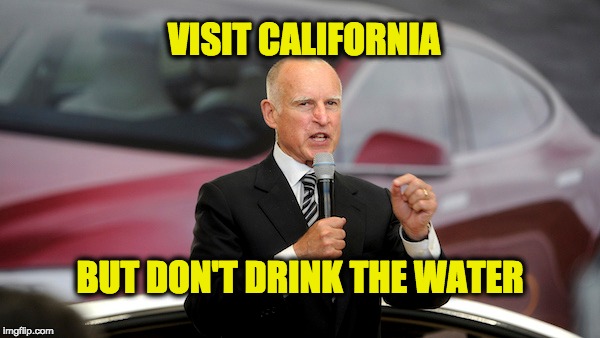 California is so blown away by the unproven climate change hypothesis that they decided to proceed with former President Obama’s plan for the state even though President Trump withdrew from the agreement. And earlier this week they approved a plan for “cap-and-trade” of carbon credits in the state.  While the new rules will not change the carbon emissions of the country, it will serve to increase costs and drive businesses to other states. And while Governor Moonbeam Brown is concentrating on the non-existent temperature rises some of the California, people in his state are drinking dirty water.

The liberal government in California has been accused of a plethora of pathetic failures, but their latest liquid lunacy is literally going to kill someone. Californians should be far more concerned about their own governmental inadequacies than they are about President Trump’s work in Washington.  After all, they can’t even keep their tap water from spreading cancer to their citizens.

“In the Central Valley of California, hundreds of wells that provide water to a million people are tainted with a chemical that some experts say is one of the most powerful cancer-causing agents in the world.

“The state is poised to take the first step Tuesday to regulate the substance — called 1,2,3, TCP — but test data compiled by an activist group show it’s also been detected by utilities across the country.

“Some who live in this lush farmland believe it’s to blame for the health problems of their family members and neighbors.

“”The word that really captures all of it is “outrage,”‘ said Jerry Tinoco, 45, who is from the city of Arvin and says at least three close family members have been diagnosed with cancer. ‘It’s a man-made chemical, so someone is to blame.’

“There’s no research showing the chemical has caused cancer spikes in specific communities, but some residents and experts told NBC News that research simply has yet to be done in towns like Arvin.

“How dangerous is TCP? The Environmental Protection Agency has concluded it’s ‘likely to be carcinogenic to humans,’ and the California water board warns residents not to shower with tainted water because they might inhale the chemical.”

The irony is certainly not lost on all who are familiar with California’s absurdly liberal legal stance.

California is a state that has promoted wildly left-leaning environmental legislation, as well as overwhelmingly strict legislation prohibiting Americans from enjoying certain guilty pleasures.  The bizarre contrast of a state in which the water cannot be made safe enough to prevent carcinogens from entering the bloodstream, yet smoking a cigarette is virtually illegal anywhere in public, would be a laughable situation were we not dealing with these life and death circumstances.

No other way to say it, California Governor Brown is a real drip.