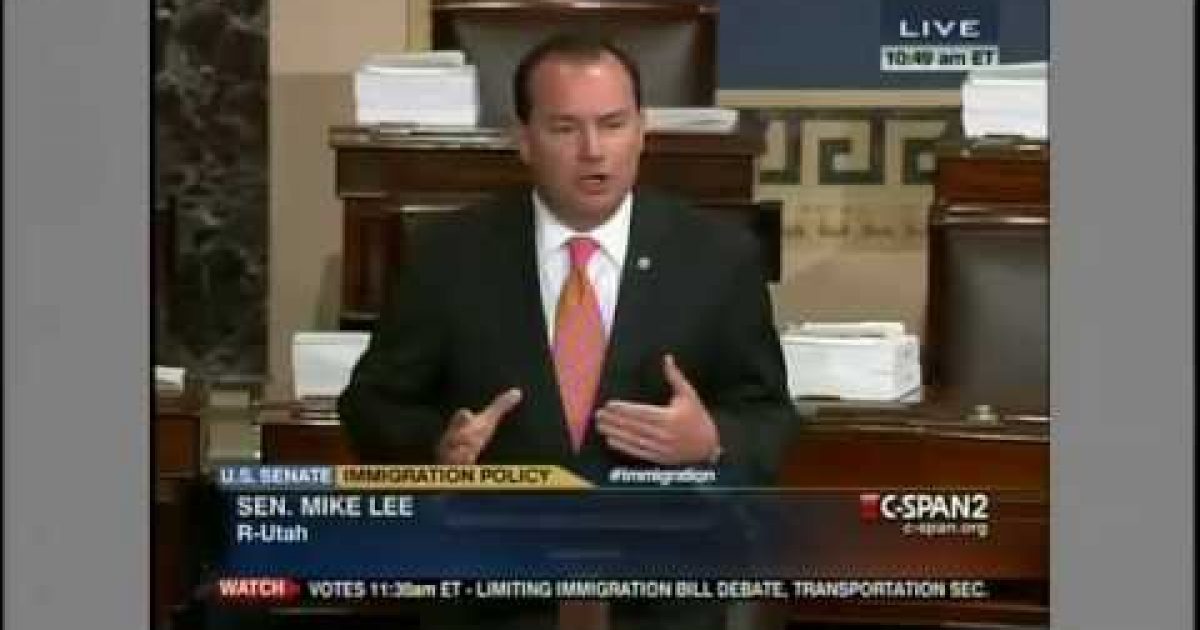 Facebook Twitter Flipboard
Progressive talking heads and liberal columnists claim that a bill that passed the Senate guarantees action to secure the border. Sometimes they add that President Obama has deported more illegal aliens than any president in history. Both those claims are lies. There are no guarantees of border security in the Senate bill, only political promises; every president beginning with Gerald Ford deported illegal immigrants at a faster rate than Barack Obama.

The bill supposedly doubles the number of border agents and completes the border fence voted for/funded by Congress during the Bush administration, but there is no guarantee those actions will be taken because the amnesty elements of the bill will be enacted whether those actions are taken or not. The bill also contains a provision giving the head of Homeland Security discretion to nix the border protection elements of the bill. Other provisions allow the Homeland Security Secretary to validate that certain triggers were met.

In other words, once the legislation is enacted President Obama will decide whether the border is secure and what to do about it. The last time Obama was given authority to enact a border security bill it was basically ignored.

The Secure Fence Act was introduced on Sep. 13, 2006 by Rep Peter King (R-NY) and passed Congress on a bi-partisan basis. In the House of Representatives, the Fence Act passed 283 -138 on September 14, 2006. On September 29, 2006, the Fence Act passed in the Senate 80 -19. The Secure Fence Act of 2006’s goal was to help secure America’s borders to decrease illegal entry, drug trafficking, and security threats by building 700 miles (1,100 km) of physical barriers along the Mexico-United States border. Additionally, the law authorized more vehicle barriers, checkpoints, and lighting as well as authorizing the Department of Homeland Security to increase the use of advanced technology such as cameras, satellites, and unmanned aerial vehicles to reinforce infrastructure at the border. So far, just 40 miles of a real fence have been built – most of it during the Bush Administration.

Of the almost 700 miles of fencing, DHS reports there are currently 36.3 miles of double-layered fencing, as the bill required, the kind with enough gap that you can drive a vehicle between the layers. But the majority of the fencing erected has been made from vehicle barriers with single-layer pedestrian fencing, the kind of barriers that are designed to stop vehicles rather than people. The design specifications vary, depending on geography and climate characteristics, but according to the Customs and Border Patrol website, those include ‘post on rail’ steel set in concrete; steel picket-style fence set in concrete; vehicle bollards similar to those found around federal buildings; ‘Normandy; vehicle fence consisting of steel beams; and concrete jersey walls with steel mesh.

Barack Obama has ignored what Congress intended. Those vehicle barriers (above) can be easily hopped by any small child. If Obama won’t build the fence, what makes people believe he will enact any of the border security elements of the Gang of Eight bill?

There are two types of deportation numbers. The first are known as “returns”: people caught at or near the border and immediately sent back from where whence they came. The other kind are “removals,”: legal immigrants who have committed crimes, those who overstay visas, or illegal aliens caught inside the country away from the border.

President Obama achieved the title of “Deporter-in-Chief” via a semantics illusion.

There is no official “deported” number, DHS does report two types of numbers for the people sent back to their home countries,”returns” and”removals.”

Before Obama’s tenure, when ICW reported “deportation” numbers they were talking about removals. In August 2012, Congressman Lamar Smith (R-TX), then Chairman of the House Judiciary Committee, explained that Obama was adding returns to the removal totals:

President Obama agreed. In an October 2011 roundtable with reporters from the Spanish media, President Obama himself said the deportation numbers were artificially high because they included those caught at the border:

Jessica Vaughn, a writer at the Center for Immigration Studies, provided the real numbers for Obama’s first term in December 2013. The numbers to examine are the Avg. Annual Deportation, as there are differences in the years served in the White House. Vaughn reported,

“Because the Obama administration has blurred the lines of which agencies can take credit for deportations, the only fair way to assess their performance is to count all deportations done by all the DHS agencies. These are reported every year in the DHS Yearbook of Immigration Statistics in Table 39, which shows the number of ‘removals’ and ‘returns’ by all immigration enforcement agencies going back to 1927.”

The actual “Deporter-in-Chief” was Bill Clinton, in fact the last president who deported at a slower rate than Obama was Richard Nixon.

Instead of telling the truth, the mainstream media is simply protecting the President. And President Obama doesn’t really want a comprehensive immigration plan; he wants an issue, which he can use to bash the opposition. If he really wanted an immigration plan there would be provisions in the Senate immigration bill with hard-fast triggers judged by people outside our border, just as the bill Congress passed requires