Obama’s Dream World: Blames Everyone But Himself For Hyper-Partisanship 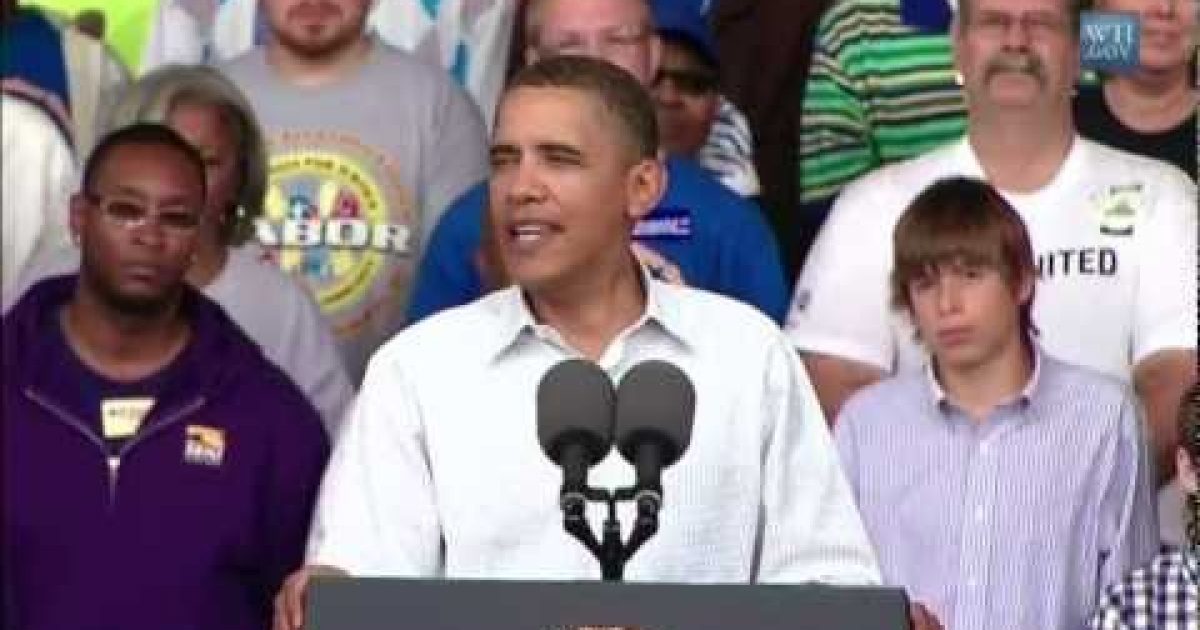 Some parts of Glenn Rush’s interview with president Obama published in Politico on Monday were quite amusing. For example this paragraph:

Obama gives less ground when it comes to his own performance as president — repeating the message, from last month’s State of the Union address, that he’s “very proud of what we’ve gotten done over these last seven years” and that his “singular regret … is the fact that our body politic has become more polarized,” a situation he attributes to the actions of others — hyper-partisanship on the GOP side, gerrymandering, the media, super PACs.

The president left out perhaps the biggest contributor to the hyper-partisanship—himself.

The Government’s dysfunction began on his third day in office, January 23, 2009 when Eric Cantor offered the President a suggestion for the stimulus plan, Obama answered:

“Elections have consequences, and at the end of the day, I won.”

That got the ball rolling.  Because he had huge majorities in both the Senate and House, the president refused to accept any input on the trillion-dollar stimulus plan. The same thing happened with Obamacare which passed with only Democratic party votes.

September 2009 saw the President’s Organizing for America group try to sell Obamacare with a slam against the Tea Party:

All 50 States are coordinating in this – as we fight back against our own Right-Wing Domestic Terrorists who are subverting the American Democratic Process, whipped to a frenzy by their Fox Propaganda Network ceaselessly re-seizing power for their treacherous leaders.

February 2010 saw the president answering Republicans at a healthcare summit. McCain complained of “unsavory” dealmaking to get the bill passed in the Senate, including promises to give special deals to residents of Louisiana, Nebraska and Florida. McCain’s also complained that despite Obama’s promise the health care bill was not produced in the open, but “behind closed doors.”  Obama’s answer?
“We’re not campaigning anymore. The election’s over.”

In October 2010 the president tried too be bipartisan by blaming all the country’s problems on the GOP and inviting them to come along with him…as long as they sat in the back.

These are the folks whose policies help devastate our middle class. They drove our economy into a ditch. And we got in there and put on our boots. We pushed and we shoved and we were sweating. These guys were standing, watching us, sipping on a Slurpee. And they were pointing at us saying, ‘How come you’re not pushing harder? How com you’re not pushing faster?’ And then when we finally got the car up–and it’s got a few dings and a few dents. It’s got some mud on it. We’re going to have to do some work on it. They point out to everybody else and say: ‘Look what these guys did to your car!’ After we got it out of the ditch, and then they got the nerve to ask for the keys back. I don’t want to give them the keys back. They don’t know how to drive…. We don’t mind the Republicans joining us. They can come for the ride, but they gotta sit in back.”

In 2011 Obama claimed that all the GOP really wants to do is destroy the environment:

“My plan says we’re going to put teachers back in the classroom, construction workers back to work rebuilding America, rebuilding our schools, tax cuts for small businesses, tax cuts for hiring veterans, tax cuts if you give your worker a raise,” said Obama. “That’s my plan. Then you’ve got their plan, which is, let’s have dirtier air, dirtier water, less people with health insurance. So far at least, I feel better about my plan.”

There were many times Obama bloviated that  GOP because they want to take away all government programs and give the money to the rich such as this 2012 example:

“The Republicans in this race, they’ve got a fundamentally different idea,” he told a small crowd who paid at least $10,000 to attend the private affair at a home in Palm Beach Gardens.

“Their basic deal is that if they dismantle government investments in infrastructure or clean energy research, or education, if they give it all away in tax cuts to folks like me and some of you who don’t need them and weren’t even asking for them, that that somehow makes America stronger.”

Since the GOP may have different objectives than the president–they are wrong and he cant compromise with them. Instead he goes on the attack, because after all…its all about him:

How about the “bi-partisan” way Obama reacted to the shooting in the navy yard?  He beat up the GOP on the budget talks:

“I can’t remember a time when one faction of one party promises chaos if it can’t get 100 percent of what it wants. … that’s what happening right now”

During the government shutdown in 2013, the president broke protocol and sent a partisan letter to government employees blaming the Republican controlled House of Representatives for the shutdown. He claimed that the Senate and the President have nothing to do with the government shutdown. At the time only the house was GOP controlled which is why they were the target, even though the Democratic party-controlled Senate was filibustering each and every GOP compromise.  Federal workers are not allowed to send partisan/political emails to other government workers using their government email accounts while they are on duty, but that didn’t stop Obama.

Here’s the truth.  Since the first day he arrived on the national political stage this President has persistently spewed hateful comments about the GOP, the Tea Party, and anyone else who would dare to disagree with his policies.   It’s hard to come up with another Commander-in-Chief who has spoken out with such venom, and as often as Barack Obama.

Obama is correct, America has seen hyper-partisanship in the past seven years. But he is blind to the fact that it originates from the White House.