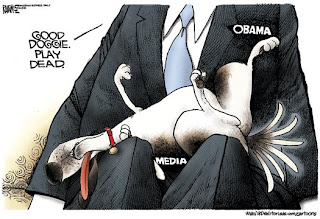 The story was all over the place yesterday, Senator Barack Obama told the San Francisco Chronicle that he is going to squeeze the coal industry into bankruptcy. Not just making this country rely even more on foreign energy, but crippling industries in the states of Pennsylvania, Ohio and West Virginia.

The San Francisco paper (it should be renamed the Comical) let its bias show in this case. You see while it did put the entire interview online (which how the quote was found), the paper wrote TWO stories about the interview and failed to mention this newsworthy response from the Democratic Candidate. Read more below:

Sarah Palin on Sunday punched the liberal media yet again. And this time it looks like she connected. Hopping on comments promoted by conservative blogs, Palin said the media are trying to hide Barack Obama‘s comments that his pollution proposal could bankrupt coal plants. The audio of the interview with the San Francisco Chronicle is here. The germane part of the interview: “So if somebody wants to build a coal-powered plant, they can. It’s just that it will bankrupt them because they’re going to be charged a huge sum for all that greenhouse gas that’s being emitted.” Said Palin on Sunday: “Why is the audio tape just now surfacing? This interview was given to San Francisco folks many, many months ago. You should have known about this, so that you would have better decision-making information as you go into the voting booth.” John Diaz, The Chronicle‘s editorial page editors, blasted back: “How can anyone suggest that we hid an interview that we did, immediately put up on the Web – and advertised to our readers?” he said. “We promoted it like hell … and I’m sure the Clinton campaign and the McCain campaign scrubbed it. You can still find the whole 48 minutes and 33 seconds online.” However, a visit to the San Francisco newspaper’s Web site shows two things. — First, the paper’s information about the audio recording does not mention Obama’s cap-and-trade proposal, the controversial part that’s now getting attention. Instead, the newspaper chose to highlight three other issues discussed by Obama, and to post the entire interview (again, without mentioning the cap-and-trade plan). — Second, the news story produced by the newspaper the day after the interview does not contain any mention of Obama’s plan for coal-fired power plants.