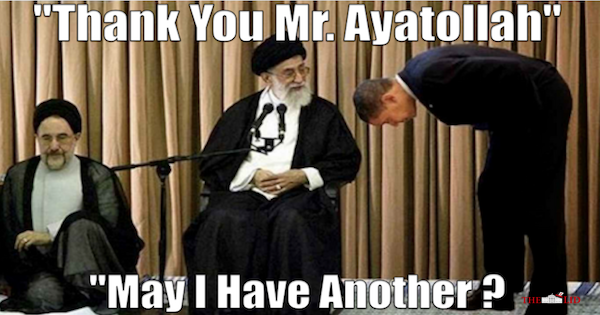 It seems that despite what the American people were told, U.S. payments of money to Iran did not have to be cash. In fact, Politico had received confirmation that the U.S. wired money to Iran in 2015 before the pallets of cash were delivered to Tehran and in 2016 after the planeloads of cash were delivered. In other words (not particularly shocking), the President and his people lied.

Last month (August 2016), we learned about the $1.7 Billion of cash given to Iran in three installments (1/17, 1/22, and 2/5/2016). We also learned that the first installment ($400 Million) was delivered the same exact time American hostages were released from the Ayatollah’s clutches (but the Administration crosses their hearts, hope to die, stick a needle in their eyes–double pinky promise that money was not ransom).

At the time, Treasury spokeswoman Dawn Selak explained why the payments had to be in cash:

“The form of those principal and interest payments—made in non-U.S. currency, in cash—was necessitated by the effectiveness of U.S. and international sanctions regimes over the last several years in isolating Iran from the international financial system,”

President Obama was more direct, and in the usual nasty style he has when caught in a lie said:

“[W]e couldn’t send them a check, and we could not wire the money,” he said during a press conference at the Pentagon today (…)It is not at all clear to me why it is that cash, as opposed to a check or a wire transfer has made this into a new story,” he said. “Maybe because it kind of feels like some kind of spy novel or you know, some you know, crime novel because cash was exchanged.”

Not surprisingly, now we know that is a lie also. The Treasury Department confirmed to Politico the U.S. has been wiring millions of dollars to Iran for over a year – before and after the $1.7 billion cash payments. But only after they got caught in their lie. Mark Dubowitz of Foundation for Defense of Democracies during his early September Congressional testimony, and the Weekly Standard last week each detailed two specific payments, which Treasury confirmed were wired: one in July 2015 for $848,072 and one in April 2016 for $8.6 million. The $1.7 billion cash payments were in between, in January and February 2016.

Politico pointed out those two separate payments (that they know about) to the Iranian government contradicted explanations from President Barack Obama and the Treasury Department that such payments were impossible.

A Treasury Department spokesman confirmed as much on Saturday and explained:

In July 2015… the U.S. government paid the Islamic republic approximately $848,000… in April 2016, the U.S. wired Iran approximately $9 million to remove 32 metric tons of its heavy water (which is used to produce plutonium for bombs).

Even though wire transfers were possible, that $400 Million ransom the administration swears isn’t a ransom had to be paid in cash:

Even though wire transfers were possible, that $400 Million ransom that the administration swears isn’t a ransom had to be paid in cash: The Treasury Department spokesman said that the January settlement specified that payment be made in cash because Iran had previously had difficulty accessing wire-transferred funds and was “very aware of the difficulties it would face in accessing and using the funds from the January 2016 settlement payment if they were in any other form than cash.”

Funny, but in April, wiring money was just fine.  The real issue might be that wire transfers can be traced, but cash cannot be traced:

Sen.James Lankford (R-OK.) who discovered the two wire transfer payments in briefings with Obama administration officials, echoed those concerns in an interview with POLITICO on Thursday.

“Oh, I don’t have any question that Iran wants the money in cash because they wanted it faster than what a wire transfer would be and it’s fungible,” Lankford said. “They announced pretty quickly afterward that they were expanding their defense and their military budget by $1.7 billion dollars, an exact amount that we had just sent over to them. So I don’t think that was accidental.”

Thanks to Obama’s capitulations to the number one supporter of terrorism in the world, we will never know.