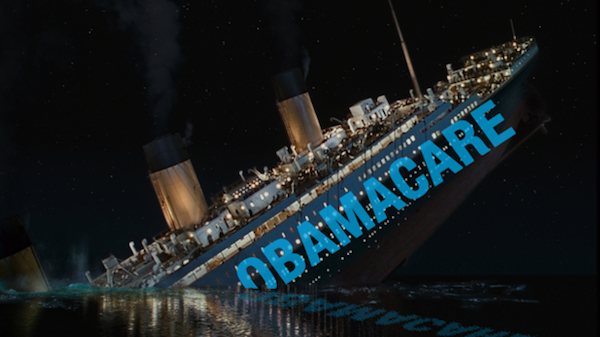 The Obamacare death spiral continues. According to CMS not only will over thirteen hundred counties only have one insurer,  fifty won’t have any insurer. In those 50 counties, there will be 27,660 people required by law to buy insurance but there won’t be any way for them to make the purchase. Those people are most damaged by the Congressional Republicans’ failure to keep their promise and repeal the oppressive health care plan

“According to recent data released by the Centers for Medicare and Medicaid Services (CMS), in 2018, 1,332 counties in the United States will have only one health insurer operating on the Obamacare exchanges and 49 will have none.

“‘The map currently shows that nationwide 49 counties are projected to have no issuers, meaning that Americans in these counties could be without coverage on the Exchanges in 2018,’ a press release for the agency states. ‘It’s also projected that 1,332 counties—over 40 percent of counties nationwide—could only have one issuer in 2018.’”

If that estimate is accurate more than 2.3 million people buying their insurance via the exchanges will only have one choice of insurer.

“We continue to see a decline in issuer participation in the Health Insurance Exchanges leaving consumers with fewer and fewer insurance options,” said CMS administrator Seema Verma. “I am deeply concerned about the crisis situation facing the individual market in many states across the nation.”

The president has urged the Congress to try again. Lindsey Graham wants to take the money and block grant to the States. I have the better idea…get rid of the entire damned thing and go back the way it was seven years ago before government told me what kind of insurance I could get and what had to be in the plan I buy.
Enough already! That’s what we were promised in 2010.
Facebook Twitter Flipboard