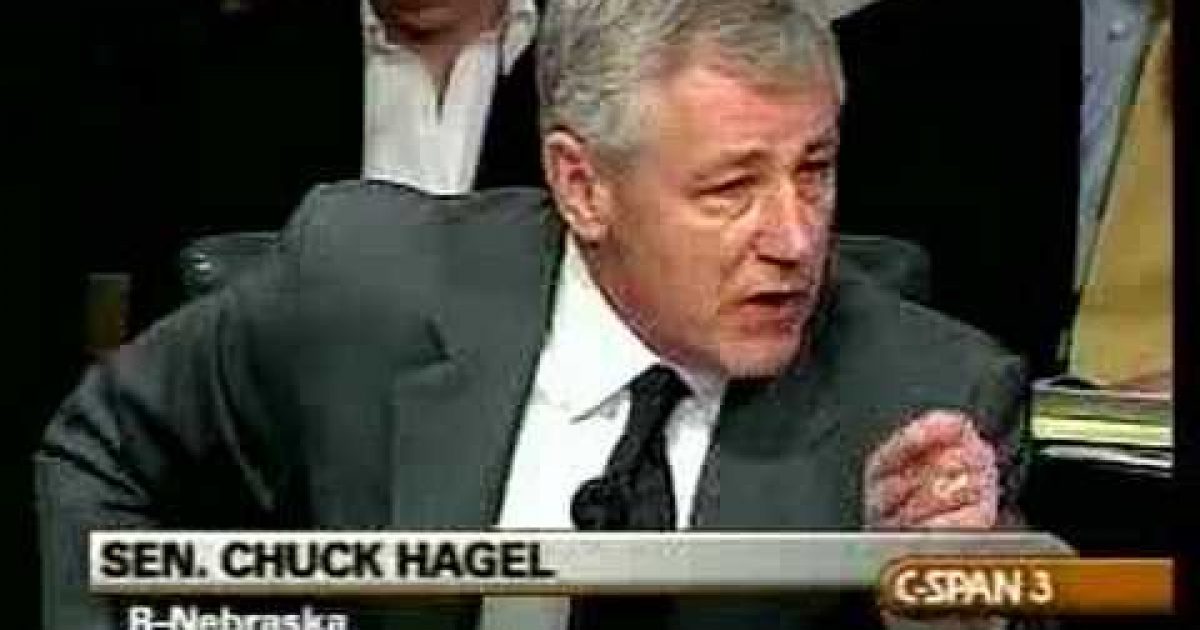 Parler Facebook Twitter Flipboard
Now that the election is over Barack Obama no longer has to appeal to supporters of Israel or haters of terrorism–so he is about to appoint former Senator Chuck Hagel to replace Leon Panetta as Secretary of Defense.

Former Republican Sen. Chuck Hagel is likely to be President Barack Obama’s next pick for Secretary of Defense, although the White House has yet to finalize its decision for the cabinet appointment.

A former Pentagon official tells NBC News that Hagel is the likely pick for the post, while another White House insider says that, while Hagel is a top candidate, it’s unclear if the president has made a final decision.

A senior administration official tells NBC News that “no decision” has been made on the nomination.

Bloomberg News reported Thursday that President Barack Obama spoke to Hagel about the position on December 4.

Hagel, who served two terms in the United States Senate representing his home state of Nebraska, has been a member of the president’s Foreign Intelligence Advisory Board as well as a member of the faculty of Georgetown University since leaving Capitol Hill in 2009.

Why should supporters of Israel be worried about Hagel?  Don’t take my word for it—in an attempt to be bi-partisan, I posted below what the National Jewish Democratic Council (NJDC) warned about Sen. Hagel’s lousy record on Israel in 2007.  (They took the page down when Obama began to express interest in Hagel for his administration…but I saved it here. Below are some of the details:

I don’t want to leave you with the impression that everyone hates Hagel’s record on Israel. The same NJDC artic did cite one group that supported Hagel’s Middle East efforts–CAIR, the American organization created by the Muslim Brotherhood is a fan of Hagel:

“Potential presidential candidates for 2008, like Hillary Clinton, John McCain, Joe Biden and Newt Gingrich, were falling all over themselves to express their support for Israel. The only exception to that rule was Senator Chuck Hagel …” [Council on American-Islamic Relations, 8/28/06]

Then there was that nice little speech he made during the Senate debate about the surge where he seemed to justify terrorism by the Palestinians “who have been chained down.” (see video below the fun part starts at 5:40-if you cannot see video click here)

Senator Hagel often appears before Arab-American groups to air his views regarding the Middle East. Among the gems of wisdom: support for Israel shouldn’t be automatic. .

He has also joined a chorus of people surrounding Barack Obama who use the anti-Semitic meme about the so-called Jewish Lobby.

Says Hagel: “The political reality is that… the Jewish lobby intimidates a lot of people up here.” This audio should be heard to truly gauge his own feelings.

Note his use of the term “Jewish Lobby”. There are many millions of Americans who are not Jewish, who support the American-Israel relationship. Hagel pushes the meme that Jews control American foreign policy (if they did–they would do a better job than this administration).


As Defense Secretary, Chuck Hagel would play a key role in working with his Israeli counterparts when formulating strategies that would promote our mutual interests in the region. The Israeli and American defense industries and departments have a long record of working closely together-an alliance that has been mutually beneficial and that has proven crucial in giving Israel the tools she has needed to defend herself from a wide range of adversaries boasting of her coming destruction, and the US the benefits of Israel’s years of counter-terrorism experience.
The Secretary of Defense is a key player in our fight against terrorism. Yet Hagel does not believe Hezbollah is a  terrorist group, thinks we should be talking to Hamas and that Iran isn’t a threat.  This man cannot be the best choice for America.

Back in 2009 when Hagel was appointed to a minor position in the Obama administration Ira Forman then executive director of the NJDC suggested that NJDC would publicly oppose Hagel’s nomination for a position with more authority. “If [Hagel] was taking a policy role, we’d have real concerns,” Forman said. And Forman indicated that his group would oppose Hagel’s appointment to any position that had influence over U.S.-Israel relations.  Lets see if they follow through or if they are simply tools for the Obama administration.

Is There A Connection Between 5G, The Vaxx & The Magnetic Phenomenon?
June 18th, 2021 Sons of Liberty Media