Obama Tells U.N. That Americans Must Give Up Their Freedom 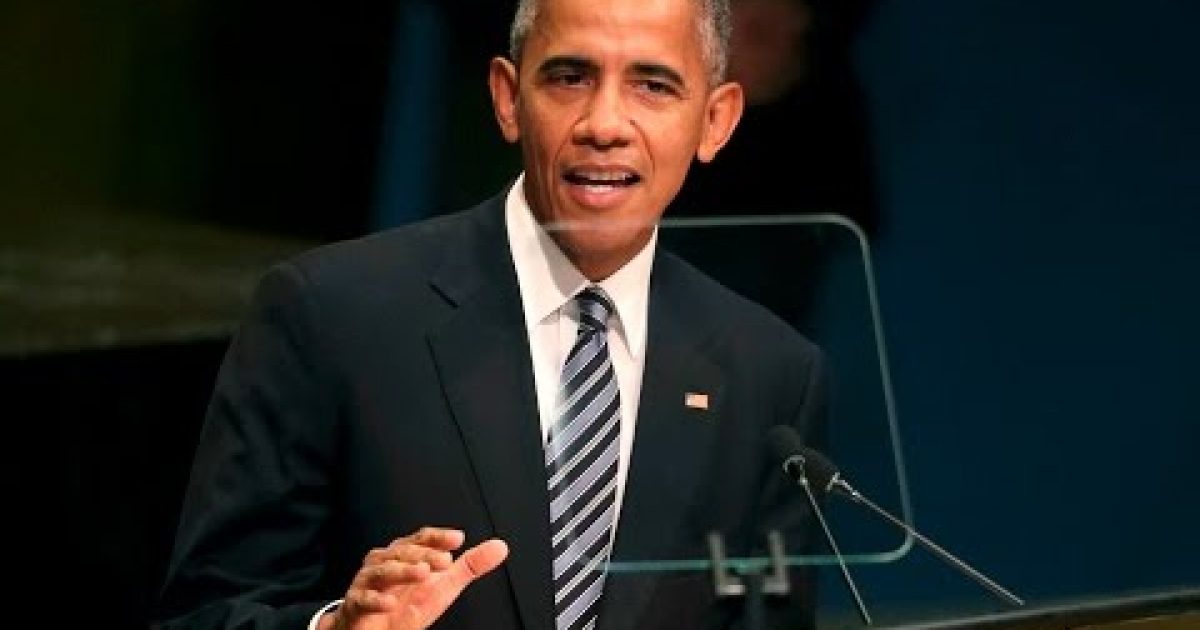 We have to put our money where our mouths are. And we can only realize the promise of this institution’s founding to replace the ravages of war with cooperation if powerful nations like my own accept constraints. Sometimes I’m criticized in my own country for professing a belief in international norms and multilateral institutions, but I’m convinced in the long run giving up some freedom of action, not giving up our ability to protect ourselves or pursue our core interests but binding ourselves to international rules, over the long-term, enhances our security.” — President Barack Obama

President Barack Obama may have just delivered the most disturbing speech ever given by a sitting US president.

Over the course of a 5,000 word diatribe to the UN General Assembly, Obama bragged about his many failures “successes,” complained about his political opponents, recognized that capitalism is the reason the world has come as far as it has, before arguing for an end to free markets, cheered the fall of communism, before calling for more socialism, and argued for greater freedom before saying that we must all give up some of our freedoms for the betterment of the world.

Obama told the audience that he believes global security can be achieved with the help of international institutions like the U.N. In his remarks, Obama said “powerful nations” like the United States will have to accept constraints and give up some of their freedom.

The president acknowledged that he has been criticized by his own citizens for this belief, but that he remains convinced he is right. Obama also stated that, while countries will have to accept some limits on their freedom, they should not give up the right to defend themselves.

To call it a “paradoxical” speech would be too kind. It was schizophrenic, full of blind idealism that ignored reality and the laws of physics. This speech, perhaps better than any before, perfectly epitomizes the foolishness, thoughtlessness, and sheer ignorance that is the Obama era of American politics.

Watch it for yourself and be amazed at the alternate reality that President Obama apparently lives in.

…Let me recount the progress that we’ve made these last eight years.

From the depths of the greatest financial crisis of our time, we coordinated our response to avoid further catastrophe and return the global economy to growth.  We’ve taken away terrorist safe havens, strengthened the nonproliferation regime, resolved the Iranian nuclear issue through diplomacy.  We opened relations with Cuba, helped Colombia end Latin America’s longest war, and we welcome a democratically elected leader of Myanmar to this Assembly.  Our assistance is helping people feed themselves, care for the sick, power communities across Africa, and promote models of development rather than dependence.  And we have made international institutions like the World Bank and the International Monetary Fund more representative, while establishing a framework to protect our planet from the ravages of climate change.

This is important work.  It has made a real difference in the lives of our people.  And it could not have happened had we not worked together.  And yet, around the globe we are seeing the same forces of global integration that have made us interdependent also expose deep fault lines in the existing international order.

We see it in the headlines every day.  Around the world, refugees flow across borders in flight from brutal conflict.  Financial disruptions continue to weigh upon our workers and entire communities.  Across vast swaths of the Middle East, basic security, basic order has broken down.  We see too many governments muzzling journalists, and quashing dissent, and censoring the flow of information.  Terrorist networks use social media to prey upon the minds of our youth, endangering open societies and spurring anger against innocent immigrants and Muslims.  Powerful nations contest the constraints placed on them by international law.

This is the paradox that defines our world today.  A quarter century after the end of the Cold War, the world is by many measures less violent and more prosperous than ever before, and yet our societies are filled with uncertainty, and unease, and strife.  Despite enormous progress, as people lose trust in institutions, governing becomes more difficult and tensions between nations become more quick to surface.

And so I believe that at this moment we all face a choice. We can choose to press forward with a better model of cooperation and integration.  Or we can retreat into a world sharply divided, and ultimately in conflict, along age-old lines of nation and tribe and race and religion.

I want to suggest to you today that we must go forward, and not backward.  I believe that as imperfect as they are, the principles of open markets and accountable governance, of democracy and human rights and international law that we have forged remain the firmest foundation for human progress in this century.  I make this argument not based on theory or ideology, but on facts — facts that all too often, we forget in the immediacy of current events.

Here’s the most important fact:  The integration of our global economy has made life better for billions of men, women and children.  Over the last 25 years, the number of people living in extreme poverty has been cut from nearly 40 percent of humanity to under 10 percent.  That’s unprecedented.  And it’s not an abstraction.  It means children have enough to eat; mothers don’t die in childbirth…

I say all this not to whitewash the challenges we face, or to suggest complacency.  Rather, I believe that we need to acknowledge these achievements in order to summon the confidence to carry this progress forward and to make sure that we do not abandon those very things that have delivered this progress.

In order to move forward, though, we do have to acknowledge that the existing path to global integration requires a course correction.  As too often, those trumpeting the benefits of globalization have ignored inequality within and among nations; have ignored the enduring appeal of ethnic and sectarian identities; have left international institutions ill-equipped, underfunded, under-resourced, in order to handle transnational challenges.

And as these real problems have been neglected, alternative visions of the world have pressed forward both in the wealthiest countries and in the poorest:  Religious fundamentalism; the politics of ethnicity, or tribe, or sect; aggressive nationalism; a crude populism — sometimes from the far left, but more often from the far right — which seeks to restore what they believe was a better, simpler age free of outside contamination.

We cannot dismiss these visions.  They are powerful.  They reflect dissatisfaction among too many of our citizens.  I do not believe those visions can deliver security or prosperity over the long term, but I do believe that these visions fail to recognize, at a very basic level, our common humanity.  Moreover, I believe that the acceleration of travel and technology and telecommunications — together with a global economy that depends on a global supply chain — makes it self-defeating ultimately for those who seek to reverse this progress.  Today, a nation ringed by walls would only imprison itself.

So the answer cannot be a simple rejection of global integration.  Instead, we must work together to make sure the benefits of such integration are broadly shared, and that the disruptions — economic, political, and cultural — that are caused by integration are squarely addressed.  This is not the place for a detailed policy blueprint, but let me offer in broad strokes those areas where I believe we must do better together.

It starts with making the global economy work better for all people and not just for those at the top.  While open markets, capitalism have raised standards of living around the globe, globalization combined with rapid progress and technology has also weakened the position of workers and their ability to secure a decent wage…