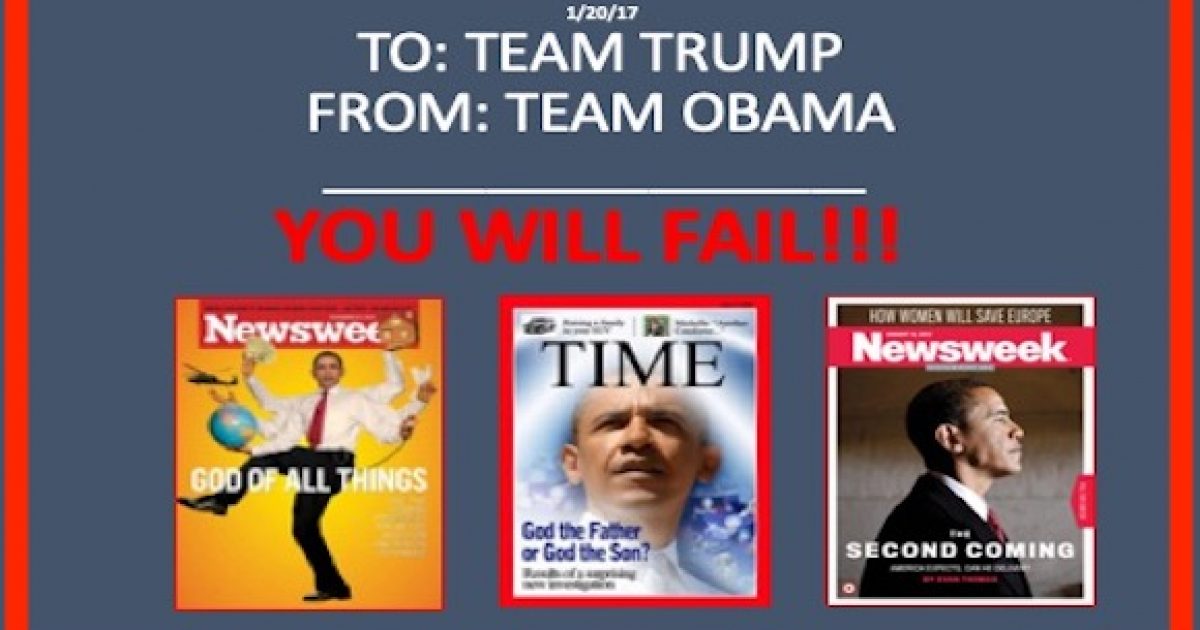 White House Press Secretary Stephanie Grisham revealed that the Obama team departing the White House lower press office left notes telling incoming Trump administration members that “you will fail.” (Note the picture above is the editor’s creation, NOT one of the notes left by team Obama).

Grisham relayed the story during an interview with a Virginia radio station.

“We came into the White House – I’ll tell you something, every office was filled with Obama books,” she recalled. “And we had notes left behind that said ‘You will fail,’ ‘You aren’t going to make it.’”

“And in the press office,” Grisham added, “there was a big note taped to a door that said, ‘You will fail.’”

Here's what we know about the nasty notes left behind by Obama aides for their Trump administration succesors when they left the West Wing for the last time. I've confirmed this with 3 sources beyond what Stephanie Grisham said on the radio this morning. https://t.co/HhXYM8Q4zL

Naturally, every Obama official who hadn’t experienced what Grisham was describing personally immediately declared her to be an outright liar.

“This is another bald-faced lie,” former National Security Advisor under Obama Susan Rice insisted. Yes, that Susan Rice, the one who told America five separate times that Benghazi was the result of a YouTube video.

“This is absolutely not true,” Obama Cabinet Secretary Chris Lu said. “Obama repeatedly and publicly praised Bush cooperation during the 2009 transition and pledged we would provide the same cooperation to whoever followed us. And that’s what we did.”

Wrong again, bicentennial breath!. Nearly every Democrat and Obama lackey was screaming about impeachment from day one, and those who didn’t, including Barack himself, constantly criticized President Trump. Which was in direct contrast to the graceful manner in which Bush conducted himself.

Not to mention, Grisham clarified that she meant the lower press office and that multiple administration officials confirmed her account.

“I was talking specifically about our experience in the lower press office — nowhere else,” Trump’s Press Secretary told The Hill.

“I don’t know why everyone is so sensitive!” she added. “At the time, we saw it as kind of a prank and something that always happened. We were so busy trying to learn where the bathrooms were and how to turn on the lights, it wasn’t that big of a deal.”

The Daily Mail spoke to officials who knew about the incidents.

“It was a mess that first week,” one told them. “Yeah, there were mean notes left in odd places. One in a deputy press secretary’s office, one inside a desk drawer in upper press, another on a bathroom mirror. They were all about how we were doomed to failure.”

Jimmy Fallon: This is after the Trump inauguration … you waving from Air Force One. Can you just walk me through…

Michelle is a queen. https://t.co/PgH7j9IDEv

Punking the new administration’s kind of a Democratic Party tradition. More severe than the team Obama notes was Bubba Clinton ‘s staff causing about $12K in damages per the General Accounting Office:

The GAO concluded that “damage, theft, vandalism, and pranks did occur in the White House during the 2001 presidential transition.” The report stated that some incidents, such as removing keyboard keys, placing glue on desk drawers and leaving obscene voicemail messages “clearly were intentional,” and intentional damage would constitute a criminal act under federal law. No prosecutions are planned, though.

The keyboard key removed was the letter “W,” making it difficult to type out George W. Bush, the name of the new president.

It’s certainly not beyond the realm of reason to think that a new generation of resistance warriors would do something almost as childish.

I mean, just look at these faces … 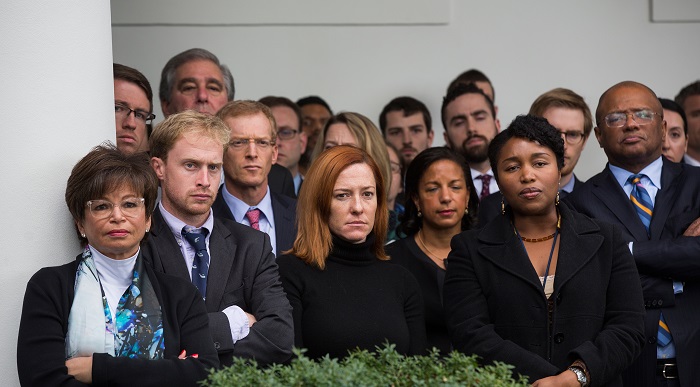 Michelle Obama herself said she cried after Trump’s inauguration, then proceeded to smear Melania Trump with a ridiculous made-up lie about the gift the new First Lady presented to her.

Would you even doubt for a minute that these partisan bureaucrats would be so bitter over Trump’s victory that they’d leave little childish notes for their successors?