Wooden Pallets Stacked With Euros, Swiss Francs And Other Currencies 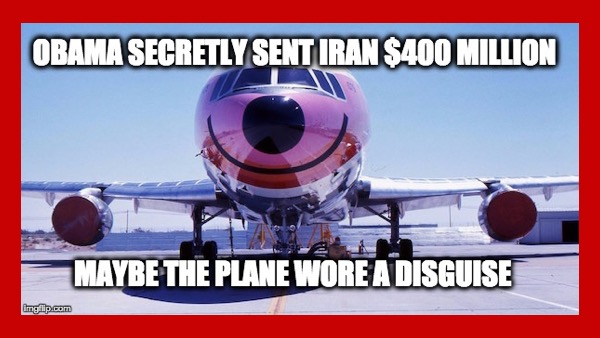 At the same time, four detained Americans were released by the terrorist state $400 Million dollars were secretly shipped by the American Government to Iran. Now it may be a total coincidence that the money transfer was at the same time as the prisoner release, that’s if one believes in coincidences, along with tooth fairies, monsters under the bed, and Hillary never told the Benghazi parents that it was all because of a video.

Wooden pallets stacked with euros, Swiss francs and other currencies were flown into Iran on an unmarked cargo plane, according to these officials. The U.S. procured the money from the central banks of the Netherlands and Switzerland, they said.

The money represented the first installment of a $1.7 billion settlement the Obama administration reached with Iran to resolve a decades-old dispute over a failed arms deal signed just before the 1979 fall of Iran’s last monarch, Shah Mohammad Reza Pahlavi.

Sure, that’s the ticket– the only reason Obama secretly sent the cash was that he suddenly decided to stop fighting a lawsuit.

“With the nuclear deal done, prisoners released, the time was right to resolve this dispute as well,” President Barack Obama said at the White House on Jan. 17—without disclosing the $400 million cash payment.
Senior U.S. officials denied any link between the payment and the prisoner exchange. They say the way the various strands came together simultaneously was coincidental, not the result of any quid pro quo.

There we go with that coincidence word again.  Perhaps it is the work of the coincidence fairy.

“As we’ve made clear, the negotiations over the settlement of an outstanding claim…were completely separate from the discussions about returning our American citizens home,” State Department spokesman John Kirby said. “Not only were the two negotiations separate, they were conducted by different teams on each side, including, in the case of The Hague claims, by technical experts involved in these negotiations for many years.”

But per the WSJ, those same U.S. officials who said the secret money transfer was not in exchange for the prisoners acknowledged “that Iranian negotiators on the prisoner exchange said they wanted the cash to show they had gained something tangible.”

Sen. Tom Cotton, a Republican from Arkansas and a fierce foe of the Iran nuclear deal, accused President Barack Obama of paying “a $1.7 billion ransom to the ayatollahs for U.S. hostages.”

And not just Cotton,  soon as the payment was made, members of congress began to question whether or not it was a ransom payment. But Foggy Bottom waited months before answering and when they did said the issue could only be discussed in a closed hearing.

Now that the secret is out the White House is fighting the ransom assessment tooth and nail because it represents another Obama broken promise:

I am reaffirming that the United States government will not make concessions, such as paying ransom, to terrorist groups holding American hostages… As President, I also have to consider our larger national security. I firmly believe that the United States government paying ransom to terrorists risks endangering more Americans and funding the very terrorism that we’re trying to stop. And so I firmly believe that our policy ultimately puts fewer Americans at risk.

Since January when Obama paid off the Iranians, the Iranians have arrested 2 more Americans, and citizens from France, Canada, and Britain and are looking for more cash.

Gee five more hostages….maybe they have a balloon loan payment coming and they need the cash. Perhaps this time Obama can put a costume on the plane so no one will notice.

At the time of the prisoner release, Secretary of State John Kerry and the White House portrayed it as a diplomatic breakthrough. Mr. Kerry cited the importance of “the relationships forged and the diplomatic channels unlocked over the course of the nuclear talks.”

A diplomatic breakthrough…”YEAH THEY TOOK OUR MONEY!!!!  Ooh Mr. Ayatollah can I kiss you on all four cheeks?”

The $400 million was paid in foreign currency because any transaction with Iran in U.S. dollars is illegal under U.S. law. Sanctions also complicate Tehran’s access to global banks.

“Sometimes the Iranians want cash because it’s so hard for them to access things in the international financial system,” said a senior U.S. official briefed on the January cash delivery. “They know it can take months just to figure out how to wire money from one place to another.”

(…)The Obama administration has refused to disclose how it paid any of the $1.7 billion, despite congressional queries, outside of saying that it wasn’t paid in dollars. Lawmakers have expressed concern that the cash would be used by Iran to fund regional allies, including the Assad regime in Syria and the Lebanese militia Hezbollah, which the U.S. designates as a terrorist organization.

Perhaps Obama cut out the middle-man and gave it straight to the terrorists, after all the only reason they go out and murder civilians because they are jobless and misunderstood.

But John Brennan, director of the Central Intelligence Agency, said last week that there was evidence much of the money Iran has received from sanctions relief was being used for development projects. “The money, the revenue that’s flowing into Iran is being used to support its currency, to provide moneys to the departments and agencies, build up its infrastructure,” Mr. Brennan said at a conference in Aspen, Colo.

And right after that Brennan told the crowd that with Obamacare they get to keep their own doctors.

U.S. and European officials wouldn’t disclose exactly when the plane carrying the $400 million landed in Iran. But a report by an Iranian news site close to the Revolutionary Guard, the Tasnim agency, said the cash arrived in Tehran’s Mehrabad airport on the same day the [released] Americans departed.

Revolutionary Guard commanders boasted at the time that the Americans had succumbed to Iranian pressure. “Taking this much money back was in return for the release of the American spies,” said Gen. Mohammad Reza Naghdi, commander of the Guard’s Basij militia, on state media.

Folks this is just another Obama capitulation backed up by more Obama lies.

The Obama/Clinton/Kerry foreign policy has turned America into a source of laughter for the terrorist world.