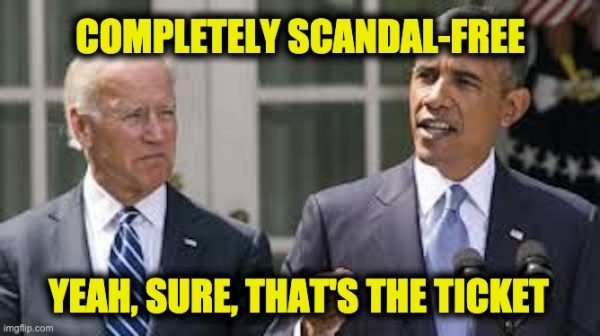 During a June 2019 campaign event, Joe Biden said about the Obama administration “”Know what I was most proud of? For eight years, there wasn’t one single hint of a scandal or a lie.”” That wasn’t a Biden gaffe, it was a lie. There were over 1063 examples of scandals, lies, mendacity, etc., during the Obama administration, and now there is one more. The Department of Justice (DOJ) has announced that a former Acting Inspector General for the Department of Homeland Security (DHS) under Barack Obama has been indicted on charges of alleged theft and fraud.  Obama official indicted

Charles K. Edwards, who served in the role mentioned above during Obama’s’s presidency between 2011 and 2013, along with his subordinate, Murali Yamazula Venkata, have both been charged with multiple counts in an alleged “”scheme to defraud the U.S. government by stealing confidential and proprietary software.””

Edwards had, according to a DOJ announcement on Friday, a 16-count indictment returned by a federal grand jury.

According to the DOJ announcement, Edwards left the DHS in 2013 but “”continued to leverage his relationship with Venkata and other DHS-OIG employees to steal the software and the sensitive government databases”” for a full three years after that.

FORMER ACTING INSPECTOR GENERAL FOR THE U.S. DEPARTMENT OF HOMELAND SECURITY INDICTED ON THEFT OF GOVERNMNET PROPERTY AND SCHEME TO DEFRAUD THE UNITED STATES GOVERNMENT https://t.co/vWj0NqO1vw

Edwards” own words from years past are especially ironic considering these new charges. After all, the man was an I.G. He was supposed to weed out the impropriety in is department.

In 2012, with an announcement involving the arrest of U.S. Immigration and Customs Enforcement (ICE) officials for “”defrauding the government,”” Edwards declared that he takes “”allegations of employee wrongdoing very seriously”” and that “”those who choose to break the law will be pursued aggressively.”

“Criminal acts within the Department of Homeland Security represent a threat to our nation and undermine the honest and hard-working employees who strive to maintain the integrity of the department,” he said at the time.

Perhaps Mr. Edwards was too busy pursuing aggressively to worry about his own behavior.

These indictments certainly put an additional hitch in the claims by both Obama and former vice president Joe Biden who have insisted their administration was completely scandal-free.

Edwards was forced to resign in 2013 following a report which outlined allegations of abuse of power, withholding documents, misspending of funds, and nepotism.

He was even accused of having staff do homework for his doctoral dissertation and having them review his wife’s graduate school homework.

At the time, Edwards had been seeking the permanent leadership role as inspector general overseeing DHS.