Obama Does Not Have the Guts To Confront Palestinian Terror 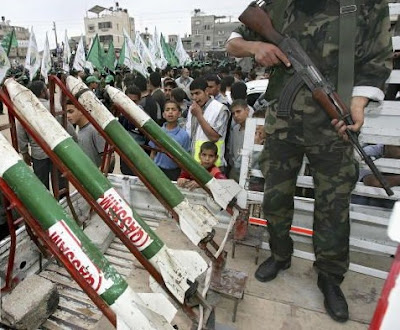 Wednesday’s terrorist bombing outside the main bus terminal in Jerusalem was not an isolated incident, it was part of a ramp-up of terrorist acts by the Palestinians during the month of March:

On March 22 (the day before the Jerusalem bombing) Israel struck back against the projectiles being fired from Gaza into Israel:

On Tuesday, IDF forces responded to projectiles fired at Israeli territory from the northern Gaza Strip. The attack took place in the afternoon when projectiles were fired toward the area of the Sha’ar Hanegev Regional Council. In response, IDF forces fired mortars to the point from which rockets were launched resulting in the injury of uninvolved civilians. Among them was the boy taken for medical treatment in Israel today.

The IDF regrets harming any uninvolved civilians but stresses that it is the Hamas terror organization which chooses to operate from the heart of civilian activity and uses people as a human shield. The event is currently being investigated.

The next day, immediately after the Jerusalem bombing, President Obama issued a statement of consolation to Israel. But showing his bias he could not console Israel without giving a tweak to the IDF about its defensive action the day before. The POTUS drew a moral equivalence between the terrorist bombing in Jerusalem and Israel’s defensive response to Palestinian mortars and rockets:

I condemn in the strongest possible terms the bombing in Jerusalem today, as well as the rockets and mortars fired from Gaza in recent days. Together with the American people, I offer my deepest condolences for those injured or killed. There is never any possible justification for terrorism. The United States calls on the groups responsible to end these attacks at once and we underscore that Israel, like all nations, has a right to self-defense. We also express our deepest condolences for the deaths of Palestinian civilians in Gaza yesterday. We stress the importance of calm and urge all parties to do everything in their power to prevent further violence and civilian casualties.

Now for a moment lets examine the difference between the Jerusalem bombing, and the IDF attack on Gaza.

The Jerusalem bomb was unprovoked and set to go off near a busy bus station in a way to maximize the civilian deaths and injuries. As for Gaza, during the five days prior to Israel’s “attack” there was a constant barrage of rockets and mortars directed toward civilian targets in the Negev communities. Israel directed its mortar attack to the coordinates of the most recent projectiles fired from Gaza. Because Hamas uses its own citizens as human shields at least four non-combatants were killed by the Israeli mortars.

If President Obama wanted to give a non-biased response, he would have expressed his deepest condolences for the deaths of Palestinian civilians and then would have blasted Hamas for using civilians as human shields which is against the Geneva Convention. But Obama refused to acknowledge that the both the civilians killed and injured in Jerusalem and the ones in Gaza were a direct result of Palestinian terrorism…well to be perfectly fair terrorism and the Palestinian’s habit of using civilians as human shields.

Yesterday, Defense Secretary Gates, was in Israel where he had a joint press conference with Israeli Defense Minister Ehud Barak. When answering one question, Gates seemed to go against the President’s comment about “stressing of the importance of calm.”

“No sovereign state can tolerate having rockets fired at its people,”

Nice statement by Gates, but it makes one wonder, was that sentence the answer to a question by the Israeli press, or was it a message to his boss? Was he telling Israel that in the face of unremitting terror, Israel can count on the continued support of the United States as she exercises its right to defend its people, or was he telling Obama to stop appeasing terrorism?

During the first four weeks of March, Israel has been hit with terrorist attacks and a barrage of projectiles from Gaza. Our President downplays those attacks as part of a violent episode of tit-for-tat between Israelis and Palestinians, instead of what they really are– Palestinian terrorism resulting in the deaths of innocent civilians on both sides.

And these attacks are not just the fault of Hamas, throughout the Palestinian Authority controlled territories and Gaza there is constant anti-Israel incitement in Palestinian mosques, schools and media, along with a refusal on the part of the Palestinians to accept Israel’s right to exist that it has created.

Since his inauguration, this President has been pushing Israel to make one-sided concessions, even to the point of canceling US/Israeli agreements made during the Bush Administration. At the same time he has not called on the Palestinians to make similar concessions.