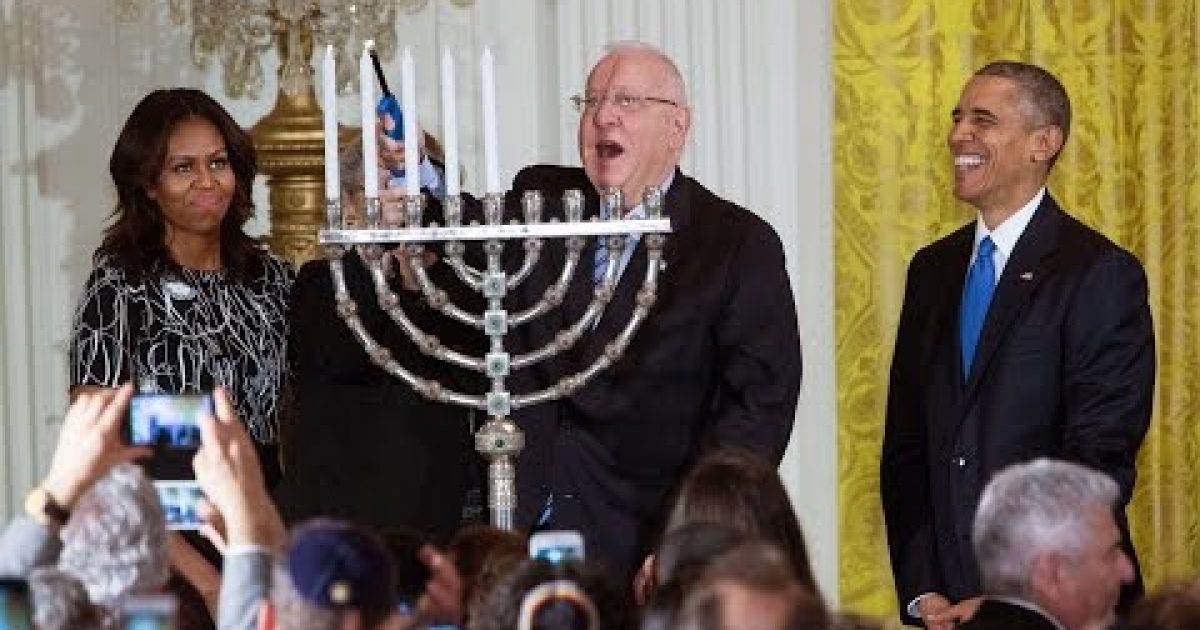 Last Wednesday’s White House Chanukah party was different from the usual fare. President Obama used the event to disrespect Israel and the Jewish people, by bringing in a BDS-supporting reform rabbi to give a politicized speech before she changed the words of one of the traditional Chanukah blessing.

The President’s choice for making the Chanukah candles-lighting blessings at the gala, Susan Talve gave a candle-lighting “speech,” calling for justice for the Palestinians, invoking the Muslim deity Allah  and black lives matter. Talve called terrorism something that should be dealt “with with peace and understanding.”

Talve is more than just a rabbi in ordained by the Reform Movement, but she is also a board member of the organization, “T’ruah” which calls itself “The Rabbinic Call for Human Rights.”  T’ruah is a leftist group which, among other things supports the Boycott, Divestment and Sanctions (BDS) movement against Israel. It takes the same “Israel is always wrong” position that U.S. President Obama takes.

For example, on the T’ruah website is a campaign called #MosesStandard whose purpose is to convince the Jewish National Fund to start labeling any of their dollars being spent on Israeli communities built outside the 1949 armistice lines. They call the geography “occupied territories, ” the term used by anti-Israel groups instead of Judea and Samaria, or “disputed territories.” Not mentioned is that they want to exploit the information to pressure the JNF and its donors to stop spending money on over the green line communities. The campaign’s page says:

“Join rabbis, cantors, and Jewish community members across the country in asking the Jewish National Fund to sign onto the #MosesStandard. That means being fully transparent about where American Jewish donations are being spent, and to stop investing our money in peace-blocking settlements”

The #Mosesstandard refers to Shmot Rabbah 51:6 where Moshe makes an accounting of the money spent to build the tabernacle.

The website goes on to explain the program with:

“If Moses could ensure that all his financial records were fully transparent, then we should expect nothing less from a Jewish organization like the JNF which has held our people’s sacred trust for over 100 years.”

T’ruah pages call the rash of stabbing attacks in Israel the “circle of violence,” and “condemns the recent vicious attacks on our friends and partners at the New Israel Fund (the New Israel Fund that T’ruah supports was named one of the top ten anti-Israel groups in America by the left-wing ADL)”

It would be reasonable to suggest that the politics of Ms. Talve and T’ruah were a key reason President Obama invited her to make her candle-lighting speech, last Wednesday which touched on liberal politics much more than it touched upon Chanukah.

After expressing her joy at being at the White House with the President of the United States to light the menorah Talve jumped into a political speech which covered many of her favorite causes such as allowing increased immigration to the U.S. and the “black lives matter” an organization founded in part  by a white man posing as black which incited the race riots which troubled the country this past summer. Finally she took the opportunity to slap at Orthodox Jews with, “And, of course, I stand with my sisters who lit these lights at the Kotel this year.”

Talve sermonized that the Chanukah lights, “say no the darkness of Islamophobia and Homophobia and Transphobia, and anti-Semitism,” and called for “security for Israelis and justice for Palestinians as allies committed to a lasting peace for all people.”

“The real miracle, that no matter how much violence there is in Paris, in California, or in the streets of our nations, we will respond with more love and more understanding and more compassion, and we will see that the good in us has grown like the lights of Chanukah — and in spite of all odds, like the Maccabees of old, we too, we too, will win.”

Finally, when it was time to light the candles the reform rabbi led the assembled in the two blessings for lighting the Chanukah candles on the fourth day. However, in the second blessing she added a word. “Sheasa nisim lahvoteynu” in Hebrew became “sheasa nisim lahvoteynu vematanu,” as she added “foremothers” to the Hebrew for forefathers in the blessing.

As she she gave her version of the blessings, President Obama was helping Israeli President Rivlin light the candles. As if to add one last indignity, he wasn’t wearing a yalmukah or any head covering which is normally worn even by gentiles during Jewish blessings.

This same president would never bring someone to call for the end of Palestinian violence at the annual White House dinner to celebrate Iftar, the ending of the Ramadan fast. Neither would Obama allow a speaker to call for easy access to abortion at the annual White House Christmas celebration. But “justice for Palestine” is an allowable topic on Chanukah in front of the President of Israel.

Chanukah is a holiday commemorating (among other things) the rededication of the Holy Temple in Jerusalem. Ironically those Palestinians whose justice Ms. Talve speaks of, deny that the Temple ever existed, and seek to remove the mount upon which the Temple stood 2,000 years ago from the possession of the Jews.

The video of the entire 14 minute White House ceremony appears below: