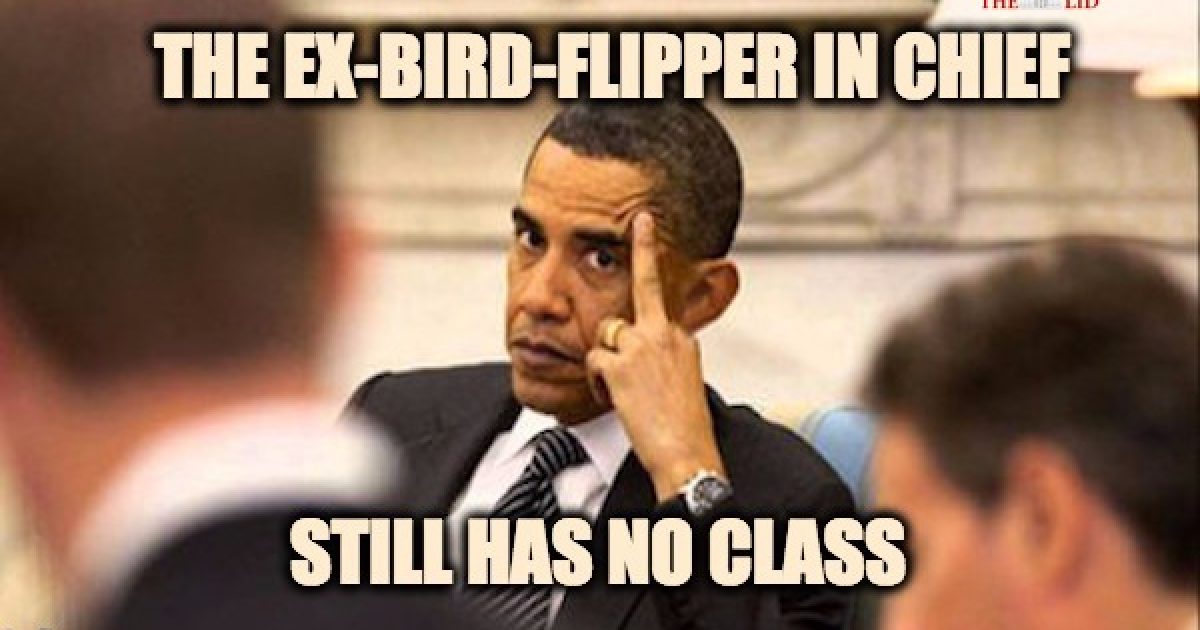 During the eight years of the Obama presidency, many observers commented on the class shown by former President George W. Bush by not criticizing his successor even though Obama blamed unfairly blamed Bush for every problem he faced from terrorism to missing putts on the 18th green.   It took Barack Obama just inside of eight months to ignore the class shown by his predecessor, and violate the unspoken rule that every former president save one has followed. Appropriately the only recent president prior to Obama to criticize his successor was Jimmy Carter who is the second worst president in the nation’s history (behind Obama)

What Obama had to say was hardly worth the breath expended. It was predictable right down to the accusations that stick like glue on the accuser. An example was his assertion that Donald Trump made his decision purely for political reasons — which is precisely why Obama and the Democrats embraced DACA during his time in the White House. By giving amnesty to children of aliens who came to this country illegally, the Democrats are pretty much guaranteed a new loyal voting bloc.

Obama further asserted that Trump’s refusal to honor this policy is somehow “not legal,” which is asinine when one realizes that the same exact power that Obama thought he had to create DACA would certainly give Trump the power to cancel it.

Here is his explanation (via Axios, which has the entire statement):

Over the years, politicians of both parties have worked together to write legislation that would have told these young people – our young people – that if your parents brought you here as a child, if you’ve been here a certain number of years, and if you’re willing to go to college or serve in our military, then you’ll get a chance to stay and earn your citizenship. And for years while I was President, I asked Congress to send me such a bill.

That bill never came. And because it made no sense to expel talented, driven, patriotic young people from the only country they know solely because of the actions of their parents, my administration acted to lift the shadow of deportation from these young people, so that they could continue to contribute to our communities and our country. We did so based on the well-established legal principle of prosecutorial discretion, deployed by Democratic and Republican presidents alike, because our immigration enforcement agencies have limited resources, and it makes sense to focus those resources on those who come illegally to this country to do us harm. Deportations of criminals went up. Some 800,000 young people stepped forward, met rigorous requirements, and went through background checks. And America grew stronger as a result.

This is pure gibberish. Prosecutorial discretion is formally defined as “the authority of an agency or officer to decide what charges to bring and how to pursue each case.” For prosecutorial discretion to apply, a law has to be involved. Here there is none. Even worse Congress voted down its version of DACA. What Obama did is the equivalent of immediately after “repeal and replace” was rejected by the senate, President Trump sends a memo to everyone in his cabinet to implement the law that was just rejected.

DACA, by Obama’s own admission, was never passed into law. Neither was it an executive order. DACA rather was a statement of intent penned in a memo from Obama’s Secretary of Homeland Security. It was, to borrow the language of photographs on food products, a “serving suggestion.” By choosing not to serve DACA, Pres. Trump is exercising his executive privilege, as guaranteed by the Constitution.

The rest of Obama’s statement is an exaggeration and wishful thinking. He writes:

But today, … [a] shadow has been cast over some of our best and brightest young people once again. To target these young people is wrong – because they have done nothing wrong. It is self-defeating – because they want to start new businesses, staff our labs, serve in our military, and otherwise contribute to the country we love. And it is cruel. What if our kid’s science teacher, or our friendly neighbor turns out to be a Dreamer? Where are we supposed to send her? To a country she doesn’t know or remember, with a language she may not even speak?

Even if one is willing to subscribe to the myth that all DACA candidates are young (some are in their forties), it is disingenuous of Obama to impute such lofty goals to all of them — and perhaps any of them since he is speaking in broad generalities. He has no better idea which of this illegal-immigrants-by-accident will start businesses and staff labs than he does which will end up on welfare or in a jail cell.

Immediately after AG Sessions made his announcement (and well before Obama issued his) President Trump released a statement which basically assured the DACA participants who didn’t break the law had nothing to worry about:

It is interesting that Obama started out his creed saying that Trump’s decision was based on politics. It was based on the U.S. Constitution, something that Obama rarely cared about during his two terms in the Oval Office. Obama’s message, however, was 100% based on politics–he didn’t really counter the arguments made by the Attorney General or the President. But then again it takes class for an ex-president to observe the tradition of the presidents before him by not publically criticizing his successor.  Not only did classless Obama neglect the “mum” rule, but he violated it so soon, and his criticizing was not based on policy but it was based on innuendo and politics.  Even in retirement the man has no class

Parts of this post were originally seen at Liberty Unyielding