Obama’s Latest Lie: If You Like Your Century-Old Trees You Can Keep Them 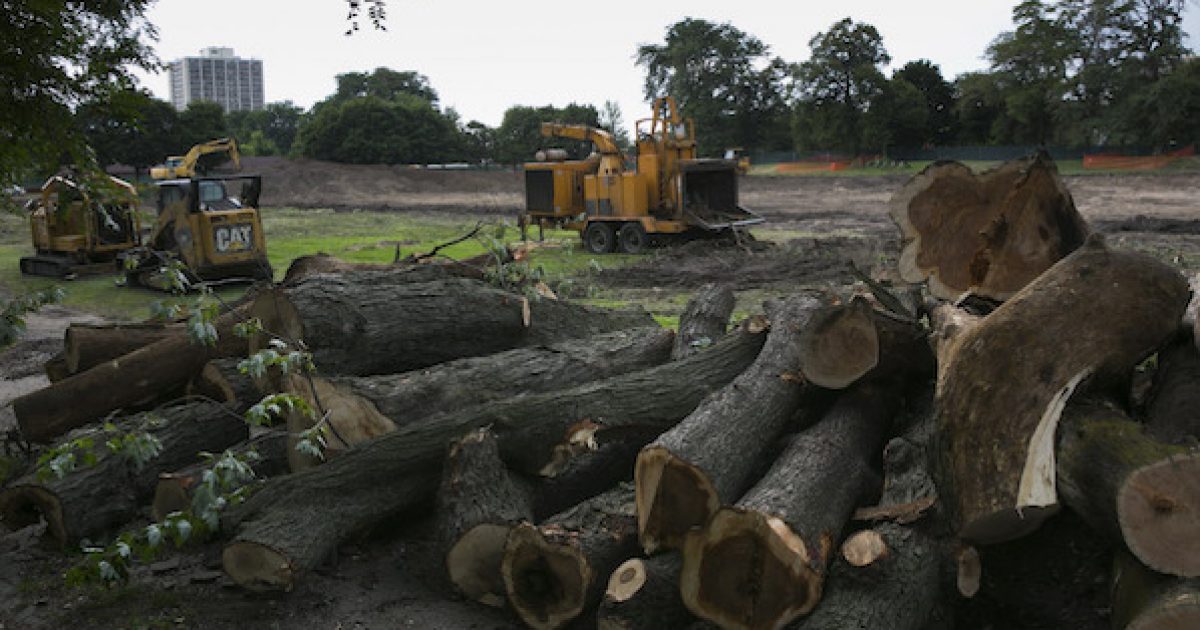 If you listen carefully, you can almost hear the exasperated groans of the good people of Illinois carrying on the wind, as former President Obama sticks it to them again. The original purpose of the transfer of public parkland to the Foundation – a private non-government entity – was to house an official federal Obama Federal Library. However, that purpose no longer exists. Obama decided that “The Obama Center” will not include his official presidential library. The federal National Records and Archives Administration will run it from someplace else.

One of his promises in selling the non-library-library project was the building, or the center wouldn’t touch the trees in Jackson Park some of which were planted in preparation for the Chicago World’s Fair which opened in 1893. But judging by Obama’s history, the promises were probably worded something like, “If you like your century-old trees you can keep them.”

While the “Obama Center” promised not to cut down any trees in the park until all permits were awarded and all lawsuits were settled. But trees are already being destroyed quite despite Obama’s promises.

The City of Chicago, the park district, and the Obama Center agreed to wait until a handful of lawsuits have developed before beginning preparations for construction, but the Chicago Sun-Times reports that the Obama Center’s promise has essentially been broken because the Chicago Park District has already begun destroying baseball diamonds and tearing out trees as part of the work associated with the Obama complex construction.

In January, the Obama Center promised that until the foundation had all permits secured and all lawsuits were satisfied, “there will be no trees removed or cut down.” But now, the Center claims that only the 19.3 acres upon which the center will sit is included in that promise, and the trees destroyed by the Park District are not on that acreage.

The Center’s claim is technically accurate. But the paper explains that the decades-old trees are being destroyed to make room for a track field that is being displaced by the impending construction of the Obama Center. One did not need to transpire without the other, so the moving of the track field is inextricably tied to the Obama Center, critics note.

The center itself has been opposed by local activists for some time, with a group of nearly 100 Chicago University professors singing a joint letter with neighborhood leaders declaring that there was no way in which the library would genuinely benefit the community.

In other words, it is a bait and switch.

Meanwhile, this monstrous complex is being built in the middle of a park that was put on the National Registry of Historic Places and is set to destroy a park that was created in 1893!

Despite claims by Obama representatives, the famed Jackson Park, designed by landscape architects Frederick Law Olmsted and Calvert Vaux in 1893, will see major alterations even though the park was placed on the federal National Register of Historic Places in 1972. And preservationists say the Obama Center is destroying the carefully planned parklands across the city’s Lake Shore region.

Then, an even worse lie is that the “center” is being built with “private money” and that no public funds will be required. Turns out the “center” will require well over a hundred million tax dollars to be spent.

Public works projects surrounding the proposed Obama Presidential Center will cost taxpayers nearly $200 million, according to a report published in the Washinton Examiner

The state of Illinois approved a $224 million budget, allotting $174 million for road work around the presidential center and an additional $50 million to renovate an above-ground railway station two miles away from the center. Of the $224 million, nearly $200 million is expected to come from taxpayer funds, the report states. But in the end whats another $200 million for a state that’s already running a $14.6 billion annual deficit.

At every step of planning this fake library, Obama has lied to the city of Chicago, the state of Illinois, and the American people. But why should he change his stripes, he’s been lying to America ever since he first announced his presidential run in 2007.

Parts of this post were initially seen at Eagle Rising