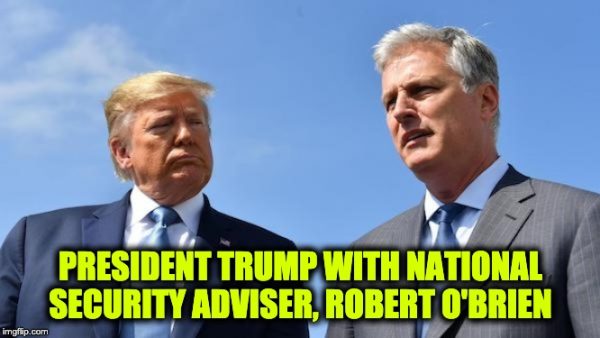 One of the beauties of this move is that it’s a decision about how to use the Executive Office of the President (EOP) that is entirely within the president’s discretion – which is why Obama got away with bloating the National Security Council staff up in the first place. Obama-Bloated NSC staff

The Washington Times reports that President Trump’s National Security Adviser, Robert C. O’Brien (successor to John Bolton), is “downsizing sharply” the NSC staff from its high count under Obama, which at one point reached as many as 450 people.  This report, on the last day of 2019, is good news for the first day of 2020.

The good news is about more than the fact that cutting the staff will move a lot of people out of the White House complex, where some of them – “Obama holdovers” – have served a cottage industry of “leaking” to the media.  It’s even more about accountability and good government, neither of which was served by moving policy-making positions onto the NSC staff and putting people in the NSC positions who (during Obama’s tenure) reportedly had trouble even qualifying for security clearances.

Many of the personnel involved will be transferred from the NSC staff back to their sponsoring departments:

Robert C. O’Brien … revealed in a recent interview with The Washington Times that 40 to 45 NSC staff officials were sent back in recent months to the agencies where they originally worked, with more likely to be moved out.

The downsizing will be carried out by consolidating positions and returning officials to agencies and departments such as the CIA, the State and Defense departments and the military.

TWT notes that during the Cuban Missile Crisis in 1962, the NSC had a policy-making team of 12.  The role of the national security adviser had not matured at that point as it did in subsequent years (starting, especially when Henry Kissinger held the position under Nixon).  And broader policy use of the adviser’s role since the 1960s didn’t result in the policy activism characteristic of the Obama staff until much later.  Advisers like Zbigniew Brzezinski, Brent Scowcroft, and Condoleezza Rice made names as top policy advisers to their presidents more than as interagency coordinators. Still, reportedly, direct intervention from the NSC in departmental business became significantly more commonplace during the Obama administration.

In the Obama administration, NSC officials wielded enormous power. NSC staff members were known to telephone commanders in Afghanistan and other locations in the Middle East with orders — a violation of the military’s strict chain of command, said military officials familiar with the calls.

Trump and O’Brien appear to be trimming the NSC back to something more like its original mission.  Says O’Brien: “The NSC is a coordinating body.”

That was actually the intent of its architects in the National Security Act of 1947.  It was meant to facilitate coordination between agencies – not to concentrate policy execution in a single body in the EOP that operates effectively outside the chains of command of the departments and agencies through which Congress can exert policy influence.  (The Iran-Contra shenanigans, in which an operation to fund the Nicaraguan Contras through arms sales to Iran was run from the NSC staff, are one of the best-remembered examples of what the NSC was not intended for.  Although it was never found that the staff’s policy conduct violated U.S. law, Congress was justifiably angry that it violated Congress’s intent.  Ronald Reagan ordered a full investigation, acknowledging that although he and Congress disagreed on the policy issue – funding the Contras – the NSC operation appeared underhanded.)

I suggest not listening to any screeds from the mainstream media about Trump gutting the NSC staff, as if he can only be doing it to serve a nefarious end.  It’s encouraging to think there will be dozens of fewer potential “leakers” who can claim to have privileged access to White House secrets.  But that’s not the most crucial aspect of this overdue reorganization.  Leaks can come from anywhere.  And as was demonstrated with the mislabeled “whistleblower” contretemps mounted through the intelligence community IG in August 2019, misleading “leaks” can be repackaged and retailed through other channels, even where the “leaker” or “whistleblower” has no actual first-hand information.  Slashing the NSC staff will cut down on “leaks,” but it is unlikely to stop the use of the “leaks” method to dress up rumor-mongering and narrative placement.

The vital aspect of the reorganization, however, is that it will restore some balance and congressional insight and influence in national security policy.  No one on the National Security Council staff, starting with the adviser, has to be approved by the Senate.  The NSC principals — the heads of departments and agencies — do have to be approved.  So do their budgets.

The staff reduction will also put policy accountability and policy horsepower where they belong.  It will reduce the cases of secretaries — defense, state, homeland security — being undercut by NSC staffers who are nominally their own personnel.  It will also help relieve the problem of stinging hornets sent by cabinet departments to sit on the NSC, under the president’s armpit, without his affirmative cognizance.  Mike Pompeo can be trusted to put the right people at the NSC staff, but the same can’t necessarily be said of every subordinate at Foggy Bottom who might have the authority to make such assignments.

It’s all good.  Have the departmental staffs and the NSC staff do the jobs we’re paying for, with a constitutional distribution of accountability.  This is a win for policy-making, the taxpayers, and American national security.