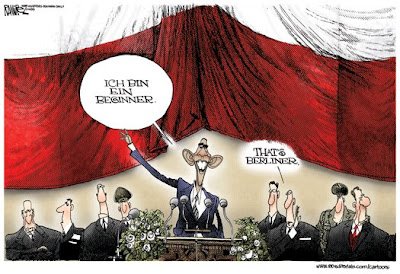 Yesterday’s speech on foreign policy by Senator Obama could best be described as troubling. I almost felt bad for the guy, he almost pulled a muscle trying to avoid saying that the surge in Iraq worked. Of course, despite his disdain for the surge in Iraq he wanted to use a similar strategy in Afghanistan. He went on to trash Pakistani President Musharraf, who despite his failings, was more willing to fight terror than those presently holding the power. In all, his speech was a mess, light on facts heavy on prose….

Barack Obama’s plan ignores the factsMichael Goodwin
Tuesday, July 15th 2008, 7:15 PM Barack Obama and John McCain had a virtual debate on Iraq and Afghanistan Tuesday and there were two takeaways. The first is that they agree on the need for more troops in Afghanistan. The second is that Obama’s vision of Iraq and how it fits into our national security is, to put it kindly, still a work in progress. Their speeches, Obama’s in Washington and McCain’s in New Mexico, were carried back to back on the cable networks. It’s the closest thing we’re likely to get to a debate until September because Obama has rejected McCain’s invitation for joint appearances. After Tuesday, I can see why. Obama is most comfortable reading a prepared speech from a TelePrompTer, while McCain likes to roam a stage, mixing prepared remarks with a question-and-answer format. Each was in his element, but McCain was far more realistic and persuasive on the connection between Iraq and Afghanistan and the need to keep pressing forward in both. “We can succeed in both,” he said. McCain, whose appearances often have a funereal quality, has been ramping up the energy level and it showed. He was animated before an audience that appreciated his determination and earned a standing ovation when he vowed, “I will get Osama Bin Laden and bring him to justice. I will do that.” Obama, in fairness, chose a subdued format with another purpose: to make what his team called a “major policy address” on national security. It was a choice born of necessity, with his recent contradictory remarks on Iraq and other issues creating doubts about his readiness to be commander in chief. He was only partially successful in dispelling those doubts. While he offered a compelling view of how America should have engaged the world after 9/11 instead of invading Iraq and getting bogged down, the speech suffered from fundamental flaws in logic and fact that Obama refuses to confront. He can’t bring himself to acknowledge how the successful surge of our troops has altered the dynamics in Iraq and that he was wrong to oppose it. He went further than usual in citing “the gains of the surge,” but still won’t factor those gains into his commitment to withdraw combat troops over 16 months. When he says, “I stand by my pledges to end the war,” he might as well add, “The facts be damned.” Meanwhile, he wants to use the surge strategy in Afghanistan, saying, “This is a war we have to win.” The contrast he set up suggests he does not believe Iraq is a meaningful struggle and that we have little stake in the outcome. The number of Americans who agree with him is declining because of the success, proving they were not opposed to the war as much as they opposed losing it. There were other head-scratchers as well. Obama talked tough about forging a new relationship with Pakistan to keep militants from crossing into Afghanistan. But in the next breath, he attacked President Pervez Musharraf, who, despite his flaws, is more committed to rooting out Taliban and Al Qaeda elements than the coalition government now calling the shots. Obama also talked about stopping Iran’s nuclear program in ways I find confusing. While he promised to “use all elements of American power to pressure the Iranian regime,” he praised European governments that have been less forceful than our own. His pressure tactics come down to meeting with Iranian leaders and threatening more sanctions, which are not likely to get through the Security Council. And as bromides go, there was this one: “It’s time to reform the United Nations, so that this imperfect institution can become a more perfect forum to share burdens, strengthen our leverage and promote our values.” That’ll leave ’em laughing in Tehran, and it begs a question: Is that all there is?