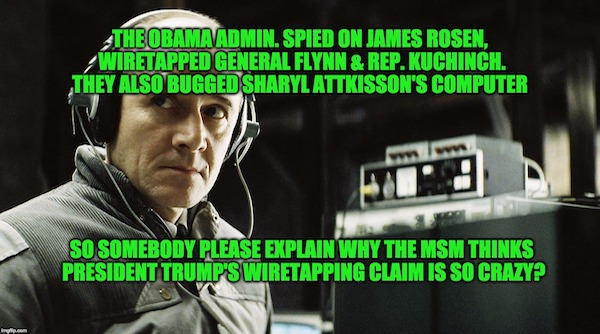 When the mainstream media heard about President Trump’s accusation that the previous administration wiretapped into his campaign/transition offices at Trump Tower, they went wild. They took the charge personally it was if the president insulted them personally (okay I will admit he did insult some of them personally). But this was not meant as an insult to any of them)  But many anchors and so-called reporters were indignant, how DARE he say that President Obama broke the law.  Perhaps it’s time for my friends in the mainstream media to calm down, try switching to decaf.

First of all, the president didn’t say Obama broke the law, he just said that Trump Tower was wiretapped. If the story is true it could have been a legal, court approved wiretap.We know that General Flynn’s conversation with the Russian ambassador was wiretapped. That’s how we found out about it, when fact that there was a phone call was leaked to the press by someone in the U.S. intelligence services. Since at the time the General was a private citizen talking to the Russian ambassador it was probably a legal wiretap. Unless of course it was part a wiretap of the Trump staff which as indicated above might very well have been legal….but even if it were legal it would have been immoral.  Another wiretap by the Obama administration that was probably legal but just as immoral was the case of former congressman Dennis Kucinich. But the bugging of investigative reporter Sharyl Attkisson’s computer was probably illegal and certainly immoral.

Former Ohio Democratic Congressman and two-time presidential candidate Dennis Kucinich said that he was wiretapped in 2011. It was his congressional office phone that had been bugged, and a conversation he had with a foreign leader was recorded.

Now members of congress speak to Ambassadors and Foreign leaders all of the time, so there is no reason Kucinich’s phone should have been bugged because he was talking to a foreign leader.

Kucinich told Fox News’ Shannon Bream that he had proof that he was wiretapped, because the Washington Times let him listen to the recorded conversation they had been provided with. Apparently this revelation occurred two years after he left office.

The former congressman explained that the conversation that was wiretapped had been “approved and cleared” by House attorneys who had advised him that it was his Constitutional right to talk to the leader. Nevertheless “someone had intercepted it.”

Kucinich who is not a supporter of President Trump believes that the President’s allegation against the Obama administration could certainly happen, after all it happened to him a member of congress. Adding that,  “Members of Congress ought to be aware that my experience was that my phone wasn’t safe in a Congressional office….If they can do that to a member of congress, they can certainly do it to a presidential candidate, and they can do it to private citizens as well,” Kucinich told the Fox News host. (see video of segment below)

An example of Obama administration ‘bugging” that was probably illegal happened to investigative reporter Sharyl Attkisson, who with the help of Judicial Watch is suing the Obama DOJ because she her computer was bugged by the government:

In her book Stonewalled Ms. Attkisson revealed how says a source who arranged to have her laptop checked for spyware in 2013 was “shocked” and “flabbergasted” at what the analysis revealed, her computer was bugged by the government.

Attkisson says the source, who’s “connected to government three-letter agencies,” told her the computer was hacked into by “a sophisticated entity that used commercial, non-attributable spyware that’s proprietary to a government agency: either the CIA, FBI, the Defense Intelligence Agency or the National Security Agency.”

The breach was accomplished through an “otherwise innocuous e-mail” that Attkisson says she got in February 2012, then twice “redone” and “refreshed” through a satellite hookup and a Wi-Fi connection at a Ritz-Carlton hotel. The spyware included programs that Attkisson says monitored her every keystroke and gave the snoops access to all her e-mails and the passwords to her financial accounts.

“The intruders discovered my Skype account handle, stole the password, activated the audio, and made heavy use of it, presumably as a listening tool,” she wrote in “Stonewalled: My Fight for Truth Against the Forces of Obstruction, Intimidation, and Harassment in Obama’s Washington.” This is outrageous. Worse than anything Nixon ever did. Attkisson says her source — identified only as “Number One” — told her the spying was most likely not court-authorized because it went on far longer than most legal taps.

Attkisson’s sin of course was not believing the White House version of events at Benghazi, or the official line about “Fast and Furious, and searching for the proof.

While there is some evidence that president’s claim of being wiretapped may be true (as it was reported in vehicles such as the NY Times, the BBC, NRO and Heatstreet) there is no smoking gun–we haven’t seen the warrants.  However the attitude taken by many in the MSM, that President Obama would never…or his administration would never…is pure nonsense. We know that the Obama bugged at least one Congressman and one investigative reporter.  We also know that Fox News’ James Rosen had his email account searched and his phone records investigated (his phone lines were not bugged).

So throw out the indignation, and stop trying to protect Obama. Trump’s claim is certainly plausible. In fact There is more evidence that Team Trump was hacked, than Team Trump colluded with the Russians to hack into Jon Podesta’s emails..